The talk between the checkers and the TSE happened amid a public debate in Brazil about the lies spread in the social networks and the messaging application WhatsApp about the elections and the two candidates in the presidential election, Fernando Haddad (PT) and Jair Bolsonaro (PSL ).

It also followed the Prosecutor General's request for the Federal Police to open an inquiry to investigate whether the two candidates' campaigns are making use of the systematic dissemination of "false news" on social networks and WhatsApp to take advantage of the election. The investigation was opened a day after a Folha de S. Paulo report was published about alleged electoral fraud by companies supporting Bolsonaro who were allegedly buying the massive sending of messages against the PT, Haddad’s party, via WhatsApp. 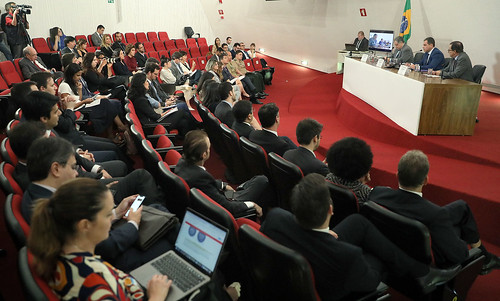 Meeting of the Advisory Council on Internet and Elections of the TSE in Brasília on Oct. 22. (Photo: Nelson Jr. / Ascom / TSE)

The proposal from the checkers to TSE was presented on Oct. 22 during a meeting of the Advisory Council on Internet and Elections of the TSE, formed in December 2017 to, in part, "develop research and studies on electoral rules and the influence of the Internet on elections, especially the risk of 'fake news' and the use of robots in the dissemination of information," according to the ordinance that created it.

Representatives from verification initiatives, from Brazilian government agencies and from the TSE, as well as the online platforms Google, Facebook, Twitter and WhatsApp participated in the meeting.

The verification group formed by Aos Fatos, Agência Lupa, Boatos.org, Comprova, e-Farsas, Estadão Verifica and Truco/Agência Pública also presented data on the work they have done during this electoral period and which points to the size of the problem in the country during these elections.

According to a survey by Agência Lupa, the 10 most popular false news stories spotted between August and October had together more than 865 thousand shares on Facebook. In the weekend of the first round of the elections, which happened on Oct. 7, Aos Fatos refuted 12 rumors that, together, accumulated more than 1.17 million shares on Facebook.

The letter also points out that "sharing and reach data in WhatsApp are impossible to measure." Aos Fatos estimates that "70% of its checking done in partnership with Facebook were also suggested on WhatsApp channels, demonstrating that rumors also circulate widely in the app.”

"Of the approximately 250 rumors denied by Boatos.org during the election period, 95% circulated via WhatsApp and were suggested by readers. Since Aug. 6, O Comprova has received messages from over 60,000 different phone numbers through Whatsapp," the statement said.

Verification initiatives have proposed four measures that the TSE can take in the next few days. The first is for the court to have a "centralized and efficient communication channel" with the checkers, making specialists available to participate in the WhatsApp group of the professionals and collaborate in the checks. The second, for the TSE to instruct the Regional Electoral Courts (TREs) to have a press officer available on Oct. 28 for the checkers.

For the third, the verification initiatives urge TSE to mobilize the platforms – "Facebook, Twitter, Google, Youtube and especially WhatsApp" – to carry out digital literacy campaigns in the coming days, alerting users to the risks of sharing content without checking its origin and veracity, for example.

And they also ask that in its pronouncements, the TSE defend the press and media professionals who are working in these elections, since there are at least 130 cases of violence against journalists covering elections since the beginning of the year that have been registered by the Brazilian Association of Investigative Journalism (Abraji).

At the time of publication of this article, the TSE had not responded to the verification initiatives’ proposal. At the request of the Knight Center, the court stated through its press office that "it is up to the Advisory Council to announce the measures, and this will occur as the meetings of the members announce such actions."

Daniel Bramatti, coordinator of Comprova and president of Abraji, told the Knight Center that he regretted that this meeting did not happen before the first round of the elections.

"The role of the TSE is limited, it does not have as many elements to combat this phenomenon, but it could have previously done this gesture of calling the checkers and looking to see how it could somehow collaborate with our work," Bramatti said.

"Having called now, despite being late, is better than not having called," he continued. "At this point I thank the TSE and I commend it and express our expectation that our proposal will receive a positive response, even though there’s so little time before the elections and for that reason we suspect that the effect may be low at this moment. It could have had a greater effect if this initiative had been taken earlier."

The president of TSE, Rosa Weber, during the meeting of the eeting of the Advisory Council. (Photo: Carlos Moura/Ascom/TSE)

Abraji's assessment, he said, is that "the problem of disseminating false information is very complex and must be combated with a wide range of initiatives, but we do not think we should try to legislate it."

State regulation can be used to create restrictions on the free flow of ideas and information, he said. Initiatives to combat disinformation have to start from society, like the efforts from verification initiatives and online platforms.

Google and Facebook were the main funders of Comprova, Bramatti highlighted, and Twitter and WhatsApp collaborated with training and technical tools. Facebook is also partner of Aos Fatos and Agência Lupa in a social network project against the dissemination of false information on its platform.

"On the platforms there is this concern to prevent bad content, this information pollution, from ending up affecting the elections and weakening democracy," said the coordinator of Comprova. "There is this perception from them [the platforms] that this is a problem and needs to be addressed, and they are looking for partners to do this and this [Comprova] was a very important initiative."

At the center of these elections in Brazil, however, is WhatsApp. The messaging application has about 120 million users in the country, which has 147 million voters able to vote in this election, according to the TSE.

"The groups within WhatsApp are very homogeneous, they are very resonant, there are a lot of people wanting more to prove their own point of view rather than trying to counter a truth to a rumor," Bramatti said. "Our concern is that inside WhatsApp, invisibly, more things circulate than we’ve been able to fight.”

The app has been singled out by experts and checkers as the primary means of circulating election-related rumors. A study by Agência Lupa in partnership with the University of São Paulo (USP) and the Federal University of Minas Gerais (UFMG) analyzed posts from 347 public political discussion groups in WhatsApp.

Lupa analyzed the veracity of the 50 most shared images in the groups and concluded that only four of them were proven true. From this study, Cristina Tardáguila, from Lupa, Pablo Ortellado, from USP, and Fabrício Benvenuto, from UFMG, published an article in the U.S. newspaper The New York Times with suggestions of measures that the application could take to reduce the problem, such as restricting forwards and broadcasts and limiting the size of groups on the platform.

The company said that it is not possible to implement these measures in time for the second round of elections, according to Estadão.

WhatsApp was the only online platform at the TSE meeting that did not send a representative, according to what the Knight Center was told. Two representatives of the company appeared by videoconference from the U.S. and left the meeting in the midst of the speech from the checkers, wrote Cristina Tardáguila, director of Agência Lupa

According to what Tardáguila told the Knight Center in text and conversation, the company representatives did not know how to respond to questions from the checkers and the Brazilian authorities about disinformation through the application in Brazil.

On Oct. 19, WhatsApp informed Agência Brasil that it had canceled "hundreds of thousands of accounts during the election period in Brazil." The statement came in response to questions from the agency about a report from Folha de S. Paulo published on Oct. 18 that digital marketing companies funded by entrepreneurs were allegedly disseminating content in thousands of groups on the application for the benefit of presidential candidate Jair Bolsonaro (PSL).

WhatsApp said it was "taking immediate legal action to stop companies from sending bulk messages via WhatsApp" and banned accounts associated with these companies.

"We have state-of-the-art technology to detect spam that identifies accounts with abnormal behavior so they can not be used to spread spam or disinformation," the WhatsApp statement added to Agência Brasil.

The Knight Center attempted to contact WhatsApp, but received no response as of the publication of this story.