On Feb. 24, 2021, the Colombian Constitutional Court ruled in favor of decriminalizating abortion during the first 24 weeks of pregnancy. This decision once again put on the table the importance of carrying out correct coverage by the media when dealing with gender issues, and specifically, sexual and reproductive rights in Latin America.

According to the United Nations Organization (UN), sexual and reproductive rights are based on the recognition of all couples and individuals to decide freely and responsibly the number of children, the spacing of births and to have access to information and means to do so, as well as the right to achieve the highest level of sexual and reproductive health. It also includes the right to make reproductive decisions free from discrimination, coercion or violence.

The Latam Journalism Review (LJR) spoke with journalists from Colombia, Ecuador and Argentina to learn about the challenges they face when covering these issues in their countries.

“We continue to have the usual problems with coverage of sexual or reproductive rights, especially when it comes to abortion. Sensationalists angles continue to be used: images of women with advanced pregnancies; dramatic stories of suffering, debates between feminists and the Catholic Church, etc. These mistakes are still being made. But, at the same time, feminist media outlets and some independent media outlets concerned with presenting a gender perspective have begun to emerge,” Catalina Ruiz-Navarro, director of the Colombian feminist outlet Volcánicas, told LJR.

The term gender perspective, according to the glossary of the UN Women Training Center, is a way of seeing or analyzing which looks at the impact of gender on people's opportunities, social roles and interactions. 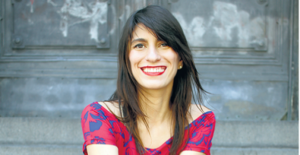 Covering the legalization of abortion in Latin America

In recent years, legal abortion has been a measure demanded by feminist groups throughout Latin America. It is currently only legal in Colombia, Guyana, French Guiana, Puerto Rico, Cuba, Argentina, Mexico, and Uruguay.

In the rest of the countries, it is prohibited or they only allow abortion when the woman's health is at risk. One of these cases is that of Ecuador where, in February 2022, a law was approved that establishes a period of 12 weeks of gestation to be able to perform a legal abortion on women who have been victims of rape. This term can be extended to up to 18 weeks in the case of indigenous and rural girls, teenagers and women.

“We in Ecuador, one of the issues we have worked hard on has been abortion coverage. We have done it in a way that seeks to decentralize dichotomous narratives. What do I mean by this? There is a dominant narrative about abortion in the media that puts you either for it or against it. That is not the narrative proposed by a feminist journalism because we are not narrating a war, we are narrating the situation of thousands of women and girls,” Ana Acosta, editor of the feminist outlet Wambra, told LJR.

The journalists interviewed for this article agree that abortion coverage in Latin America is difficult because it is a topic that is punished and penalized both legally and socially.

“I think in Colombia abortion coverage is much more progressive than in other countries, because we have been talking about the situations [in which abortion is allowed] for a long time. In Mexico (where I currently live), coverage continues to be extremely sensationalist, marked by super conservative values that are deeply embedded in popular culture and the ways of doing journalism,” Ruiz-Navarro said.

In the case of Argentina, legal, safe and free abortion in the health system was approved in December 2020, after a long battle by feminist groups who saw the bill rejected earlier in 2018.

"The coverage situation of gender issues in general and those related to abortion changes in particular changed markedly in Argentina with the Ni Una Menos movement in 2015," Sandra Chaher, communication and gender consultant and director of Comunicación por la Igualdad [communication for equality] said. "This awareness of feminism and the gender agenda in the country also substantially influenced the media.  I think it is what enabled the entire political, parliamentary, and media debate that gave rise to the legalization of abortion," Chaher added. 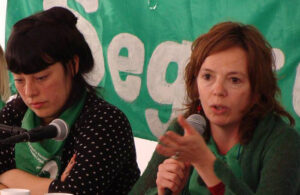 “Gender issues cannot be covered by just anyone. Or anyone could cover them, but not necessarily well. You need specific training,” Sandra Chaher, director of Communication for Equality, said. (Photo: Courtesy)

To be or not to be a feminist

Women journalists who cover gender issues are used to being asked by society and their own work environments to choose between activism and journalism. Defending social causes goes beyond the objectivity required by many within journalism.

“In 2019, when we created the first Zarelia Festival, many journalists who we thought had coverage with a gender perspective did not call themselves feminists. Many times because of the stigma and harassment within their own work spaces,” Acosta said. “That has changed. Many of the journalists who previously did not want to call themselves feminists for fear of criticism, today say ‘yes, I am a feminist journalist, so what?’” the Ecuadorian editor said.

A journalist who has no problem admitting to being a feminist and positioning herself as such is Mariana Fernández Camacho, who works for Infobae and is also part of the Comunicación por la Igualdad association. “I have always been a feminist journalist. In addition, I situate myself in this space, in this political position, that's how I present myself. I do not agree with always having to present both sides. For example, if you cover a topic about sexual abuse in childhood, traditional journalism would tell you that you have to listen to the story of the protective mother, but you also have to get the story of the father who is being denounced. No, I don't do those things,” said Fernández Camacho.

For Chaher, the stigma around taking feminist political position is the most complicated aspect when dealing with stories about gender. But, this position does not exclude the preparation women journalists must have when covering issues on sexual and reproductive rights. “Gender training is a type of journalistic training, the same as cultural, political, economic, or sports journalism. In other words, gender issues cannot be covered by just anyone. Or anyone could cover them, but not necessarily well. You need specific training that not everyone has,” the consultant said.

We have made progress

In recent years there has been a blossoming of media in Latin America that seek to put the issues of cisgender and transgender women and the LGBTQ+ community in the public conversation. The digital information and analysis platform about what’s going on in Latin America, Distintas Latitudes, identified 30 feminist media outlets in the region.

However, although new media specialized in these issues have been created, the gender perspective is still missing from other media. “There are few feminist women working in the media. There are still far fewer feminist women in positions of power and important decision-making. However, I cannot fail to acknowledge that we’ve also made a lot of progress in the media in relation to how we approach these issues,” Fernández Camacho said.

The truth is that more and more journalists are specializing in gender coverage and paving the way for future generations. In addition, support networks have been created in different Latin American countries, such as the Red Internacional de Periodistas con Visión de Género [international network of journalists with a gender perspective], which supports and prioritizes feminist journalism.

“To say that we have not gained spaces in the world of journalism with respect to women's rights and with respect to a gender approach, would be to deny the reality we are living in. Doors have opened with great difficulty and much remains to be done. But, we have made progress,” Fabiola Calvo Ocampo, director of the Red de Periodistas con Visión de Género in Colombia, said.