When he was 11, César Pérez Romero knew that something was not quite right in his family. Despite the many questions he asked and although his parents never hid what was going on and explained as much as they could for a child his age, César was far from imagining that they were immersed in one of the court cases on freedom of expression that had the greatest impact not only in Ecuador but in Latin America.

In March 2011, his father, César Pérez Barriga, part of the founding family and owner of the newspaper El Universo, two uncles and a columnist for the newspaper were criminally sued by then-president of Ecuador, Rafael Correa, for slander as a result of a column published in February 2011. After going through several courts, in February 2012, the Specialized Criminal Chamber of the National Court of Justice of Ecuador ratified the ruling against the newspaper, its executives and the columnist, who were sentenced to three years in prison and ordered to pay compensation for damages to Correa for US $40 million.

The case made national and international headlines. The Special Rapporteur for Freedom of Expression of the Inter-American Commission on Human Rights (IACHR) and that of the UN described the decision as “disproportionate” and called for its revision. Years later, in a sentence of Nov. 24, 2021, the Inter-American Court of Human Rights (IACHR) agreed and found the Ecuadorian State guilty for violation of different rights, among them freedom of expression, judicial guarantees and judicial protection.

Pérez Romero, however, felt he had to tell his story. “[I] was always thinking about telling this story, I was interested in it. It seemed to me that telling the story from my point of view would bring something different to the table. Because it's true, the case had been talked about extensively in national and international media, [but] I thought that telling a little bit of the human perspective and this first-hand experience I had was something different that hadn't been told in depth during the trial,” he told LatAm Journalism Review (LJR).

That story finally came to light with “Crooked Power,” an English-language podcast made in the final years of Perez's journalism degree at the University of Texas at Austin. In 2019, while taking a digital journalism class with professor Robert Quigley, Perez kept thinking about the different formats his idea, which had originally started as a book, could take.

However, after talking to his professor about the idea and sharing a bit about his life, it was Quigley who pointed out to him how important it would be to do it as a podcast.

“He told me the story of his family's fight for their freedom,” Quigley told LJR. “I could tell he was passionate about the story, and the things he and his family went through were dramatic and interesting. These fit the podcast format because the medium allows for stories as complex as these to unfold.”

Perez, who was looking for advice from his professor, thought Quigley's proposal to do a podcast and actually work with him was excellent. Quigley, associate professor of practice and director of Innovation at the School of Journalism, had recently founded The Drag Audio Production House, a student-driven production company in UT Austin’s Moody College of Communication.

Having made that decision, Perez spent his summer holiday in Ecuador in 2019 with the goal of doing interviews and all the necessary research.

“I had some vague recollections and scant memory of what had happened. So I had to do some research, not from scratch, but I had to research things I already knew, but finding a new dimension I had not seen when I was a child. I was trying to understand things, to understand the legal maneuvers of former President Correa in another light,” Perez Romero said. “It was, basically, reliving everything I had lived through when I was 11 years old, but this time understanding better not only the lawsuits and so on, but also what was at stake.”

In Texas, along with Maya Fawaz - also co-producer and host of the podcast - they continued the reporting and investigative work.

The podcast schedule was affected by the COVID pandemic. The team had already been working for a few months when, like everywhere else in the world, they were sent to work and study from home. 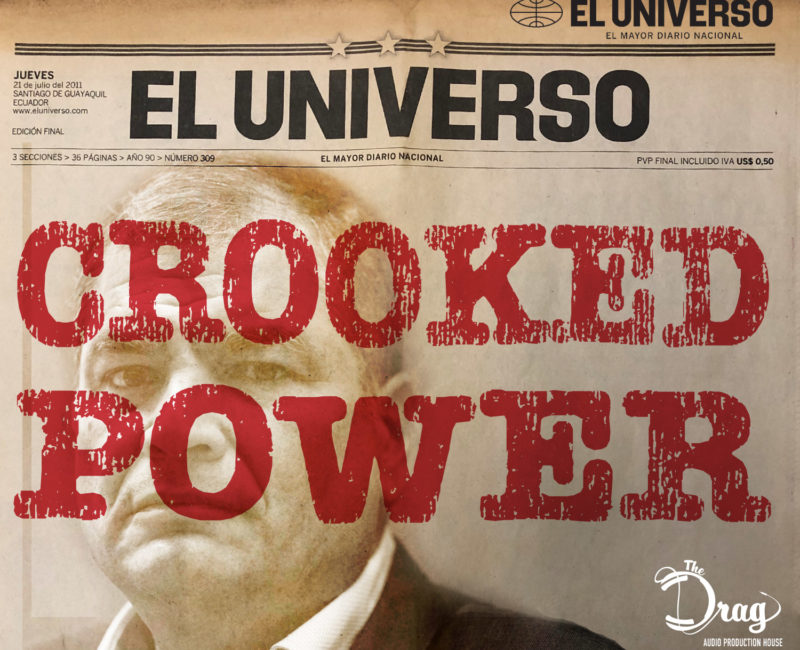 However, Perez says there was also something that affected him on a more personal level: his mental health. Reliving those years was more difficult than expected, especially because when he returned to Ecuador because of the pandemic he had to constantly live with the protagonists of his story.

“It was really tough because it all came to a head with COVID. I was in Guayaquil for a long time, for almost a year because of COVID, taking online classes and working on this project. My work day did not end when I closed my laptop or I was away from the project for a bit. The subjects of the story were still living with me. I’d meet them in the kitchen, I’d meet them in the living room, in my bedroom, they’d come say hi. So it was very difficult for me to put this project aside because at dinner it was like 'oh, I have this question, so let's do it,'” Perez said. “I wasn’t able to do it, I wasn’t able to set boundaries.”

He managed to get out of this situation with professional help, but also thanks to the support of the team. “I have to say, the people at The Drag couldn't have been better to me. They understood and supported me and were always there for me. And the truth is that the project could not have gone ahead if it hadn't been for them, for their friendship, their affection and their empathy.”

It was precisely because of this situation and in the spirit of resting a bit, that the Spanish version was not made immediately. However, Perez emphasizes “that he has not forgotten about it” and that there will be a process of discernment to decide what “Poder Torcido” will be like. “I wouldn't want Crooked Power in Spanish to be a simple translation. I want it to bring something more to the table,” he added.

For Quigley, this story also had its challenges such as getting the team in Texas to make sense of what had been experienced in Ecuador. However, he said that “I would definitely be open to more stories about Latin America and freedom of expression issues.”

“It’s a complex story and very personal, obviously, to Cesar. Podcasts such as this one take a long time to produce and involve endless drafts and rewrites of scripts. For Cesar, I think it was difficult to re-live some of the more painful experiences. I’m so proud of him for pushing through, and I’m impressed by the work that Maya Fawaz did as the host and reporting partner,” Quigley said.

After almost three years of work and interviews with up to 20 people, Crooked Power streamed its first episode on May 22, 2022. The fifth and last episode was streamed on June 14. Although it hasn’t been long since, both Perez Romero and Quigley have gotten good feedback on the product.

“A lot of people I don't talk to often have written to me to say they’re excited about the project, that they liked it or that they think it's very important. They thank me for telling that story. Just the other day I was at a social gathering and an acquaintance came up to me and said 'hey, you made me cry with your project,'” Perez said. “I've had those reactions from people who knew the story, but like me, knew it when we were young, when we were little, when we didn't understand much about the world. Also, people in the United States have sent me comments and the truth is that that means a lot to me.”

“People have reached out to tell me they are impressed that students can teach such a serious journalistic story. I’m impressed, too,” said Quigley, for his part. He thinks the story would be worth a TV documentary series.

In addition to how interesting the story may be, for Pérez Romero it also represents the struggle for freedom of expression in his country and even in the region. The decision of the IACHR Court, which was a kind of closure to this incident, gave them “a lot of relief because it acknowledged that the legal process was flawed.” Yet, he believes the struggle continues despite the ruling, not only in Ecuador but throughout the world.

“I believe that what remains to be done is to continue fighting for a better democracy, to have a country - and not only a country but a region - where freedom of the press is respected. But more than freedom of the press, people’s freedom to express their opinion, people’s freedom to hold accountable those who have power over them and be able to do so without fear,” Pérez Romero said.

“In our country it is important that people understand that it is possible, it is right and it is okay not only to criticize power, but also to have opposing ideas. To be able to live in a society where these differences, these varied opinions are accepted, in order to build a better democracy. I think we should all aspire to that and go forward in that path,” he said.