The journalist not only won, but after a little more than four months of work and training, she published her data journalism project on July 5 on women who went missing in Mexico over the last decade, a figure that exceeded 14,000.

“That was the intention, to see what happened with (missing) women and discover that the patterns are a little different than with men,” Arteta told LatAm Journalism Review (LJR). “And from there, [while] many questions arise, the truth is that some remain unanswered. Only an official investigation could answer some questions.” 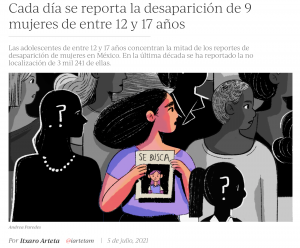 To find these patterns, Arteta had to manually download 960 tables of data related to these disappearances. She had to do it this way because the open database made public in 2019 by the National Search Commission was unavailable after the arrival of the new federal administration.

As she explained, there is currently a web page that can be searched, but the open database (which records almost 200,000 disappearances of males and females, according to Arteta) that had almost 100,000 rows and 70 columns cannot be seen in its entirety. 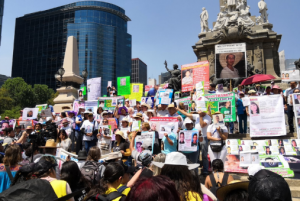 Posters at the march of mothers of disappeared children (Wotancito, CC BY-SA 4.0, via Wikimedia Commons)

Arteta went back to the National Institute for Access to Information (INAI, for its acronym in Spanish), an entity that required the National Search Commission to hand over the database, but she never received it. According to the journalist, she received three incomplete databases, which accounted for 50,000 disappearances.

“That was an obstacle that was very sad because I could not overcome it and what I did was a manual download of data, but it is very limited only to ages, to states, to condition – that is, whether the person was located or not,” Arteta said.

Still, she downloaded enough data to find and tell stories about “a widespread social problem,” one without an apparent end in sight.

With the help of Verne Roberts of Enlighten Agency, a Microsoft technical partner based in New Zealand, she made visualizations that show specific findings about Mexican women. For example, she identified that the Mexican states with the highest numbers of missing women are not necessarily the same ones in which there are more missing men. And, perhaps one of the data that most impacted her has to do with the disappearances of adolescents. In the last decade, on average, nine adolescent women between 12 and 17 years of age are reported missing daily.

“There is an extraordinary peak in adolescent women, women between 12 and 17 years old. At the age of 15, it is like the worst, which triples the number of men who are reported missing. That was like one of the first findings and starting points,” Arteta said.

In addition to the data analysis, Arteta spoke with at least 15 sources, including authorities, specialists and relatives of missing persons or those who reported a disappearance. She was conducting her investigation throughout the state of Mexico (the federal entity) because this is the only state in the country that has a gender alert for the disappearance of women, as well as a search mechanism. The gender alert serves to recognize that there is a serious situation of violence against women in the place, as well as to give a budget for specific actions to stop this violence, Arteta explained.

“I hope the project is well-received. I hope it’s just this: [that it can] provide the possibility of seeing a lot of information on a page that was not well-kept by the government. […] Instead, saying that journalism is doing a job that should be done by the authorities,” Arteta said.

Animal Politico’s proposal is one of several data journalism projects that Microsoft has done in partnership with organizations like Knight Center, according to Vera Chan, who oversees worldwide journalism relations at Microsoft News.

“Our mission has been to help our news partners and the industry overall in leveraging technology that can amplify a reporter’s expertise,” Chan says. “With the exponential growth of data, often times the story gets buried in rows and rows of numbers. To be able to use tools that are robust and accessible, journalists can better interrogate and communicate the meaning underlying data at a personal and communal level. Just as important is for audiences to go deeper than a static image and get explore the data, so that they can follow the narrative and also come up with their own observations.”

For Arteta, finding hidden patterns because she did not have the data more clearly led her to wonder about the many lost stories, which were not seen because they did not have differentiated figures between men and women.

“I would like that to also lead us to a reflection. There are problems that perhaps we are not seeing by doing it like this in a general way, and this intends to be like a magnifying glass with which we see the differentiating elements and see what happens in Mexico with violence against women, which is a widespread social problem," she added. 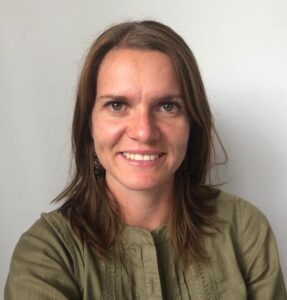 Among the aspects that Arteta highlighted the most in her training and work with Microsoft is the use of the Power BI, a business intelligence dashboard that in recent years has been used as a data journalism tool because of its ease of use. “This was very interesting because it is the possibility of analyzing large amounts of data in a very practical way and in the end it is a bit of doing the work of three people. Because it is not only as a reporter, but also a designer and programmer.”

The possibility of telling such important stories in an interesting and interactive way is one of the main lessons that the experience left her with.

"I believe in this very much. When it comes to telling a story to people that is not just a text –which can be interesting and well-written – but [to offer] this experience, alongside a Microsoft mentor, and in which the goal was to create a product that is an experience for your user, an informative experience,” she said.

The graphics, Arteta explained, are not only visually attractive and interesting, but also offer precise information.

“It is giving people the possibility to find their own story that interests them. Maybe if you want to see where you live. Perhaps if you want to find your age or are thinking of a daughter, for example. In other words, if I have a 14-year-old daughter, to see the situation in Mexico of the disappearance of 14-year-old girls,” she said. "I think I take that [from the experience], giving a new option for telling a story or for reading a story."

“I always invite journalists to get into data journalism because I believe that it opens up a world of possibilities, of not being stuck in seeing a small part, but in being able to expand it and being able to have the solid basis to say, 'this is so, because I have the data.'”

Journalists who are interested in learning more about data journalism can register for the upcoming free online course from the Knight Center, with support from Microsoft, “Introduction to data journalism: How to find and process large volumes of information.” This Massive Open Online Course (MOOC) starts on July 19 and runs through August 15, 2021.