The story of Emilio Gutiérrez Soto, the Mexican journalist who arrived in the United States more than 10 years ago to request asylum but who could face deportation, was for Alejandra Ibarra the starting point of her project Defensores de la Democracia (Democracy Defenders), a digital archive that seeks to preserve the work of journalists killed in Mexico.

When she met Gutiérrez Soto, Ibarra – also a Mexican journalist – covered migration from the United States for The New Yorker, and part of her reporting involved not only talking to the journalist but learning of the investigations that would have put his life in danger after he received threats, allegedly from some members of the Mexican Army.

However, Ibarra could not find his investigations in media outlets. In fact, she noted that there was no space in the country that archived the work of those who have been killed. In the case of Gutiérrez, he can tell his story and knows where his work can be found. But the investigations or other documents of the 45 journalists killed in Mexico since 2000, according to figures from the Committee to Protect Journalists (CPJ), run the risk of being forgotten.

“I realize that there is nowhere that gathers the work of journalists killed in Mexico, no thematic collection, say, and many of them are disappearing,” Ibarra told the Knight Center. “Many of them are online, the portals are for sale, social networks no longer have their profiles and newspapers where some of them published are scattered or in some cases hidden in the media, in basements and in places that do not have an archive system.”

Convinced that journalists, especially in the regions, are telling the recent history of Mexico, she decided to create this "living archive." With funding from the Brown Institute, a collaboration between Columbia and Stanford universities in the U.S., the first phase of Defensores de la Democracia began in the summer of 2018. 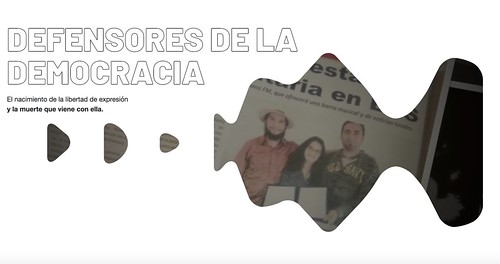 The Defensores de la Democracia project wants to be a large living archive of the work of journalists killed in Mexico. (Screenshot).

For more than a year and joined by an interdisciplinary group – which includes a historian, a programmer and an investigator – Ibarra (who directs and also reports) and her team managed to gather and catalog more than 12,000 works by 40 journalists. They were all murdered starting in 2000 and are included in the CPJ registry.

“[That year was chosen because] Mexico officially transitioned to democracy after a hegemonic party government in 2000 and it is a bit ironic why being a democracy and having all the guarantees by law it is such a dangerous country for journalism,” Ibarra said.

To collect this work, the team rebuilt the career of each of the murdered journalists that included knowing where they had worked and for how long. From there began a process of digitalization of physical works, the creation of a code to extract the internet works that existed, while Ibarra was in charge of talking with editors and family to find these materials.

The platform where this living archive is maintained offers different content filtering options such as investigations, crónica, opinion column, among others. There is also a calendar view that allows you to see, if this is the case, how the journalist's coverage changed over time.

“The idea is that this also serves as a tool for anyone who wants to understand and study this phenomenon [of violence] to find as much information as possible here in Mexico,” Ibarra said.

For this, the site also contains data on the socio-political context of the places where the murders were committed, such as who the mayor and governor were, whether or not organized crime groups are present, educational level, among other data.

The financing of this first phase comes will last until the end of this year. However, the team is already working to obtain the resources that will allow it to continue with its collection of information.

In addition to searching for organizations that defend freedom of expression or universities, the team wants to find new advertisers through innovations in the dissemination of content. One of them is the creation of a podcast that will be released in the first days of 2020.

“The idea is precisely to talk about the journalists, but also, broadly, the obstacles to exercising freedom of expression in Mexico,” Ibarra said. “Then each episode is going to be the story of a murdered journalist and how through that story we will illustrate other challenges. For example, systemic violence in Veracruz; or social networks and their role in protecting journalists; or the legislation to obtain airwave access for community radios.”

Also, in this second phase, Ibarra believes it is important to generate a more planned approach with the media that have seen their reporters killed. Although so far everyone has been very open in offering the necessary collaboration for this database, Ibarra believes that it is sometimes difficult to do it because of their daily obligations.

“Maybe we still don't have a timely proposal of how we can start systematizing all this without implying they use more resources, or really preventing what they are currently doing to report the news,” she said.

A particular case that demonstrated the need to be able to do this in a more coordinated way occurred with a media outlet in the state of Quintana Roo that worked exclusively on Facebook.

Although the information collected by Ibarra suggests that it was a coordinated attack by denouncing the content on Facebook as inappropriate, the truth is that this demonstrates the importance of having a more practical collection mechanism.

“I would like this project in the future to become a local journalism archive in Mexico that adds all the works and saves them because in the end they are telling the recent history of a country in armed conflict during the last three decades,” the journalist said. “And already having all this collected that one can filter if you want by censored content, by murdered journalist, by topic, by region, by platform, whatever. But in this way we make sure that it is not being lost because doing it in reverse is a bit of a race against time.”