On Oct. 21, 2022, Bogotá, the capital of Colombia, will host for the first time the Gabo Festival, which resumes face-to-face after two years of online editions due to the Covid-19 pandemic. On the same day 40 years ago, Gabriel García Márquez was announced as the winner of the Nobel Prize for Literature. His acceptance speech "The Loneliness of Latin America", is the inspiration for the tenth edition of the Festival named in honor of the Colombian writer and journalist.

Born to celebrate journalism, the Gabo Festival today is an event that celebrates the extraordinary stories that spring up throughout Ibero-America. The Gabo Award, which recognizes excellence in Ibero-American journalism, was the centerpiece of the festival's first edition, which took place in 2013 in Medellin, as Daniel Marquínez, director of Special Projects at the Gabo Foundation and leader of the Gabo Festival since 2014, reminded LatAm Journalism Review (LJR).

“The Festival began as a series of activities around the Gabo Award ceremony and grew from that,” Marquínez said. “It is no longer a conference by journalists for journalists, but rather a city-wide event in which storytellers establish contact with citizens, who come to understand the cultural value of stories based on reality.”

The motto of this year’s Festival is #NosUnenLasHistorias. From Oct. 21 to 23 the event will hold panels that will address issues related to journalism, literature, poetry, education, diversity, gender, creativity, and innovation. According to the Festival's organization, these themes will be present in more than 150 activities that will bring together more than 100 experts from Colombia and other countries. 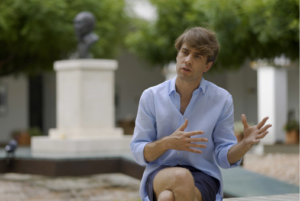 “The Gabo 2022 Festival is conceived as a weekend plan for everyone. It is a broad experience in which you can participate in: workshops, conferences, interactive spaces, exhibitions, and recreational experiences that include concerts and culinary offerings aimed at all audiences,” Marquínez said.

After seven years of the Gabo Festival in Medellín and two years in virtual mode, Bogotá will be the host city in 2022. “For our comeback, it is always interesting to try new situations. Bogota is a great Latin American city with a great cultural calendar. And, whether we like it or not, it is the center of the country. It is much more accessible to both national and international audiences simply because of the greater connectivity the city has,” Marquínez said.

He also recalled the connection between Bogotá and García Márquez, the festival's patron. The journalist and writer was born in Aracataca, in northern Colombia, in 1927, and moved to the Colombian capital in 1943. García Márquez established himself there as "a renowned chronicler" with a column in the newspaper El Espectador. He also acquired the magazine Cambio together with other partners, according to the organizers of the Gabo Festival.

“And given that it’s been 40 years since the Nobel Prize was awarded to Gabo, and give that it’s a city where Gabo became a journalist in various media, not only practicing journalism, but also as a media manager, [Bogota]  has a strong connection with Gabo and with the country,” Marquínez said.

The speech "La Soledad de América Latina" ("The Loneliness of Latin America"), delivered by García Márquez when he won the Nobel Prize for Literature 40 years ago, is the inspiration for this edition of the Gabo Festival. According to Marquínez, the “insight and content [of his speech] are more relevant today than ever,” and from this “we designed a program with the most relevant and challenging issues for the Latin American region.”

In the Gabo 2022 Festival statement, the event's organizers quote one of the best-known passages from the speech: “Poets and beggars, musicians and prophets, warriors and scoundrels, all the creatures of that unbridled reality have had to ask very little of the imagination, because the greatest challenge for us has been the insufficiency of conventional resources to make our lives credible. This, my friends, is the crux of our loneliness.”

“Forty years later, immersed in this enormous reality, little has changed, but we are no longer alone,” the statement continues. The main point is that the Gabo Festival will be a space and a moment to gather “storytellers from Ibero-America, regardless of format, journalistic genres and subject matter” in search of “new ways of narrating the region and thus contributing to untangling this knot.”

Villoro was singled out by the Gabo Award Board “for the brilliant and inspiring body of his work and career, which he has dedicated to address, narrate and interpret with ever-renewed vitality and masterful style, from different genres, the social, cultural and political realities of Mexico, Latin America and the world. [All of this] always with his own profound and critical viewpoint, which he projects in his journalistic practice with rigor, ethics and exemplary talent.”

The winners of the Gabo 2022 Award were selected from among the 1,980 works entered for the award and published between July 1, 2021 and June 7, 2022 in news outlets from Latin American countries and from Portugal and Spain.

Argentina stood out in this edition of the award: the journalists responsible for three of the five winning entries are from that country. Ricardo Robins won in the Text category for his feature story "El polizón y el capitán", published in the digital news outlet Rosario3. Rodrigo Abd won in the Photography category for his photojournalism story "El dolor silencioso de Ucrania," published by Associated Press. And Nicolás Maggi and the Erre Podcast team, from Radio Universidad del Rosario, won in the Audio category for their 10-episode series "La Segunda Muerte del Dios Punk."

The other Latin American winner of the Gabo 2022 Award is the team from Agencia Cocote, Guatemala, in the Coverage category, for their transmedia special "No fue el fuego." The investigation deals with the fire at the Hogar Seguro orphanage in Guatemala City in March 2017, in which 41 girls, aged 14 to 17, died.

In the Image category, the winning entry was "Multimedia reportage in Andriivka: Radiography of a village under Russian occupation for 30 days," from the Portuguese newspaper Observador.