Glenn Greenwald, a U.S.-born journalist who lives in Brazil and co-founder of The Intercept and The Intercept Brasil, was slapped during a live show on Brazilian radio station Jovem Pan on which he appeared as a guest.

Brazilian journalist Augusto Nunes, a columnist on the same radio station who was also a guest on the program Pânico on Nov. 7, is the person who slapped Greenwald.

As he began his speech, Greenwald recalled that this was the third time he had appeared as a guest on the show and stated that he learned that Nunes would also be present only upon arriving at the radio station. He said he agreed to participate because he believes in dialogue and stressed that he has many political differences with Nunes. 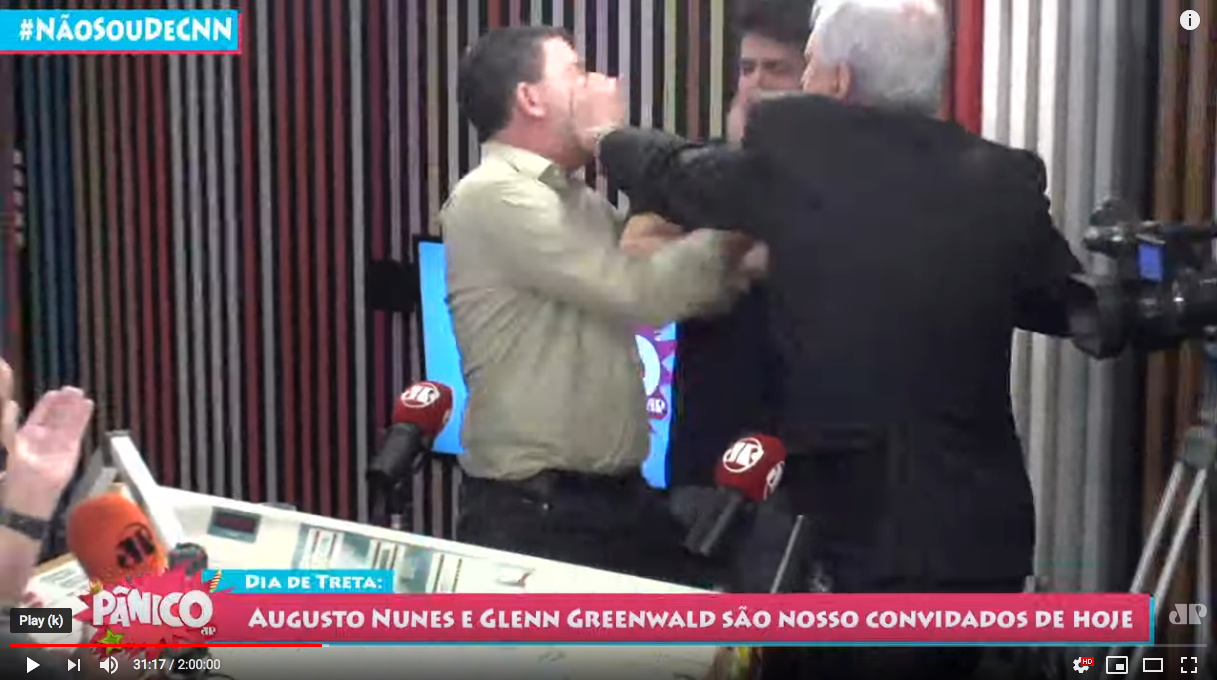 Glenn Greenwald is slapped by journalist Augusto Nunes during an episode of Pânico on Jovem Pan. (Screenshot).

“I have no problem being criticized for my work, I also criticize him, but what he [Nunes] did, what he said on this channel, Jovem Pam, was the dirtiest thing I've heard in my career as a journalist,” Greenwald said. “He said a judge should investigate our children and decide if we [Greenwald and his husband, Federal Deputy David Miranda (PSOL/RJ)] should lose our children, if they should return to the shelter, accusing us of neglecting our children, the most disgusting thing I've ever heard in my life.”

Greenwald was referring to a speech by Nunes on Aug. 30 on Jovem Pan’s Pingos nos Is, of which he is a commentator. “Glenn Greenwald spends the day chirping on Twitter or working as a recipient of stolen messages; this David is in Brasilia dealing with rachadhinhas,” Nunes said, making reference to The Intercept Brazil's #VazaJato series of reports based on leaked private messages from Operation Lava Jato prosecutors, and alleged corruption in the federal deputy's office.

Then Nunes questioned “who takes care of the children” adopted by Greenwald and Miranda - married 14 years ago, they have two children, adopted in 2017. “That's where the juvenile court should investigate,” Nunes said.

On the program Pânico, Greenwald asked Nunes if he still believed what he said on Aug, 30. Nunes responded by saying that Greenwald "committed crimes" in reference to the messages leaked by an anonymous source and published by The Intercept Brasil, and that "he cannot identify ironies, he cannot identify a humorous attack." He also invited Greenwald "to prove when I asked a court" to investigate the couple.

In response, Greenwald said Nunes "is a coward" and repeated the offense. Nunes responded by trying to hit Greenwald, which Greenwald deflected. The two got up and someone from the program’s production team approached to separate the two journalists, and at that moment, Nunes managed to slap Greenwald in the face. Already apart, Greenwald tried to hit Nunes in the face, but was removed by program officials. The show’s host then called a break and after that it was possible to hear Greenwald call Nunes “coward” once again and Nunes responded with “idiot” and “I’m a coward, but [you] got it in the face.”

After the break, only Greenwald remained on the show. The presenter, Emilio Surita, then stated that Greenwald was "very nervous" and that Nunes' comment about Greenwald and Miranda's children had been "ironic."

After the show, Greenwald posted a video on his Twitter profile stating that "all decent people know that you don't use someone's minor children in the political debate." “But most importantly, the use of physical force and violence in political debate is a very serious thing, and the movement of [Jair] Bolsonaro [president of Brazil], of Olavo [de Carvalho, extreme right philosopher and guru] and of PSL [Bolsonaro's Social Liberal Party] are applauding, supporting the use of physical force and violence in the political debate because they are a fascist movement, and fascists want violence,” the journalist said.

Indeed, some members of the government and the PSL have expressed themselves on Twitter expressing support for Nunes's aggression against Greenwald, including two of the president's sons, Federal Deputy Eduardo Bolsonaro (PSL/SP) and Councilman Carlos Bolsonaro (PSL/RJ).

To newspaper Folha de S. Paulo, Nunes said he did not regret “at all” having physically assaulted Greenwald and said he was assaulted first, verbally.

“I was morally insulted. Then I warned him not to use the word 'coward,' which is insulting, which is serious. I warned five times, he insisted. I had two options: either react with pride or swallow the insult. I had no alternative,” he said. Nunes also said that he will do "the same thing every time he is repeatedly insulted even in the face of a warning."

In a statement released hours later, Jovem Pan radio said "it regrets the episode" and apologized "to the listeners, viewers and guests of this edition of Pânico, including Glenn Greenwald."

“A vigilant advocate of democratic principles, pluralism of ideas and freedom of expression, Jovem Pan has always opened its doors to guests from different ideological fields and with dissonant opinions,” the radio station said. “The freedom of expression and criticism granted by Jovem Pan to its commentators and guests, however, does not extend to any kind of offense and aggression. The company vehemently repudiates these behaviors.”

The Intercept Brasil posted a note on its Twitter profile about the case and said it "repudiates Augusto Nunes' behavior." “The Intercept has been publicly giving solidarity to Glenn Greenwald, a journalist who has been under constant threat for months because of his work and who has to deal with all kinds of aggression on a daily basis. And we express our deep repudiation of violence, physical or verbal, against journalists who are doing their jobs,” the website wrote.

Press freedom organizations also protested Nunes's aggression toward Greenwald. Reporters Without Borders (RSF), in its Twitter profile, said it “vehemently repudiates the aggression against journalist @ggreenwald during a live radio interview. Nothing justifies physical violence in the field of debating ideas, especially in front of microphones.”

Also on Twitter, the Vladimir Herzog Institute gave “solidarity to journalist @ggreenwald and his whole family for the aggression he just suffered live.”

The National Federation of Journalists (Fenaj) and the Union of Professional Journalists in the State of São Paulo (SJSP) published a note of solidarity for Greenwald. The entities criticized Jovem Pan for “inviting Greenwald to participate in one of their programs without warning him in advance of the presence of Nunes, author of personal attacks against the journalist and his family, which created a climate of conflict prior to the start of the interview.”

“Physical aggression against a guest for an interview violates all precepts of journalists' professional conduct. We remind you that Brazilian journalists have a Code of Ethics, just as there is a code of ethics at the international level, and that its precepts must be followed by all professionals,” Fenaj and SJSP wrote.

The Brazilian Association of Investigative Journalism (Abraji) wrote in a statement that the aggression "started a wave of attacks on the press, on the Internet, as we have rarely seen in recent years in Brazil."

“Abraji issues notes about threats to journalists in the profession. The debate that took place at the station does not correspond to this parameter. However, the wave of reactions following the episode triggers a warning that cannot be ignored about the stage that hostility toward journalists and press outlets has reached in Brazil. Anyone who stirs this climate of hostility intends to silence critical voices and stifle freedom of expression - without it, other freedoms will also die,” the organization wrote.