This is the second story in a series on covering violent conflict in Latin America.*

This article has been updated ** 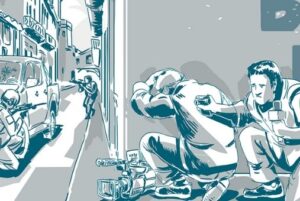 Coverage of violent conflict deviates from the traditional image of a war front for journalists working in Latin America. In the midst of urban violence increasingly present in several countries, reporters need to be prepared to act quickly in the most unexpected situations. Having proper safety training has become as critical as carrying your old notebook and tape recorder.

This is because reporters may be assigned to risky coverage of violent conflict situations in their day-to-day routines. These can be confrontations between rival drug traffickers or between gangs and security forces, or even situations of military confrontation against guerrilla groups.

Brazilian TV Globo news director in Belo Horizonte, Marcelo Moreira, has been involved with safety training for journalists since 2006 when the first courses were offered in Rio and São Paulo.  These trainings, according to Moreira, include two-hour workshops and activities over two days with practical and theoretical classes.

In practical classes, journalists even go through shooting simulations, a risk that is part of the routine of reporters who cover violence and public security in Rio. 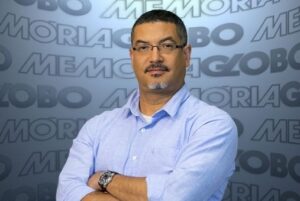 Marcelo Moreira, from TV Globo: Training on coverage of violent conflicts needs to include executives and editors. Photo: Courtesy/TV Globo.

“Where they train police officers, we train journalists. They learn ballistics and protective equipment. They have guidance on first aid, on how to protect themselves, on positioning. It is customized training for those who are going to face our situation of armed conflict,” Moreira told LJR

The journalist, who presided over the Brazilian Association of Investigative Journalism (Abraji) between 2012 and 2013, cites some of the crucial tips for those caught in the crossfire.

“You shouldn't stand behind a pole because it's hollow. A tree is better, but as long as it has enough trunk so that a bullet doesn't go through. If you're going to hide behind a car, try to stay behind the engine block, because if you're just behind the bodywork, you'll be hurt."

A photojournalist who covered urban violence in Rio de Janeiro for many years for the local newspaper O Dia, Severino Silva warns of the importance of journalists observing everything around them and staying away from the center of attention in the coverage of violent conflicts.

“When entering a community to cover a shooting, I always say keep your eyes and ears open and do not talk. I also silence the ringtone from my cell phone, leaving it just to vibrate. In the case of photography, I don’t use a flash,” he told LJR.

Long before dealing with the situation in practice, however, it is necessary to carry out a rigorous preparation process, starting from the emergence of the story idea. An essential item to be taken into account is the risk assessment, which involves mapping various problems that may occur during the reporting process, even if the matter does not, in principle, involve a conflict.

Founder and CEO of GJS, a U.S. company that trains and supports journalists in hostile environments, Frank Smyth teaches his students, mostly investigative journalists, to create a “hierarchy of risk” when defining interviews. In this system, a known and reliable source receives a score of 1, the minimum degree of risk; at the opposite extreme, if the interviewee is suspected of a crime or is a corrupt police officer, the score can vary from 7 to 10.

“What that means is that, first, you talk to the people who are the least risky. And only talk to those who offer greater risks, if necessary, at the end of the investigation,” Smyth told LJR. He is also the author of the CPJ Journalist Security Guide, which contains chapters on preparing for armed conflict, as well as reporting on organized crime and corruption.

As a reporter, he was even abducted with other colleagues during coverage of the Gulf War in 1991. “We should have been more careful and left earlier from where we were, along with another colleague, but we stayed and paid the price. So one of the things we teach in class is to give yourself a margin of error in any situation.”

However, anyone who thinks that the definition of security protocols for journalists should only involve the reporter assigned to the story is wrong. Prevention must come from those who occupy higher positions in a newsroom, Moreira argued. For Globo's news director in Belo Horizonte, top management needs to be aware of the importance of security for its professionals, while heads of news and editors must take part in training together with reporters, to know how to deal with different situations.

“In training, we focused a lot on the need to spend time in the newsroom to plan how the reporting on the street will be done. It's more than just sending a person out just because they've been trained. What is the reporter's escape plan in case the story goes wrong? If it is in a risky place, how are they monitored? Every investment in technology and planning has to count on the participation of the leadership. The reporter alone does not do that,” Moreira explained.

In Mexico, the deadliest country in Latin America for journalists, the NGO Article 19 warns that the most vulnerable journalists are those who cover topics related to local politics, security, organized crime, and drug trafficking.

According to the NGO's prevention coordinator in Mexico, Itzia Miravete, building support networks strengthens the defense and protection capabilities of professionals, and can reduce risk. She also suggests keeping a record of incidents, such as direct threats or shootings, so that risk can be measured more clearly and preventative action can be taken in the future.

“Once the possible threats, as well as vulnerabilities and capabilities, are identified, we suggest working on a protocol that manages to implement measures to transform vulnerabilities into capabilities and inhibit both the probability and the impact of an attack,” Miravete told LJR. “Finally, we suggest that the measures taken have a preventive perspective, but also to act during the emergency as well as after the aggression in order to work on the psycho-emotional impacts of said risk.”

Violent conflicts in Latin America often involve situations and preparation similar to covering a war zone. This is what we can learn from someone who has reported both in Latin America and in war zones in other countries.

The need to gather as much information as possible before leaving the newsroom and carry safety equipment, such as helmets and bulletproof vests, remains. Knowing where to go, which roads to use, and how to behave in a calm manner when approached by security forces or even criminals is essential, but this preparation is not enough.

Yan Boechat: “The less money you have, the more at risk you put yourself.” Photo: Courtesy.

Specialists in reporting in combat areas warn of the importance of hiring a professional who belongs to the place and serves as a “right arm” for the reporter in all his activities in the region. This “right-hand man” is called a fixer and performs multiple functions: guide, security consultant, and even assistant in the production of stories.

“Usually, you're putting your life in his hands. And he can make an assessment of the risks you will face there because he really knows the terrain. Without a person to guide me there, I am in absolute vulnerability. The fixer is essential, more than a bulletproof vest,” Brazilian reporter Yan Boechat, from the television station Band, who has covered conflicts in Venezuela, Afghanistan, Syria, Iraq, Ethiopia, and Ukraine, told LJR.

Hiring an experienced fixer in this role, however, comes up against financial limitations, a reality for many freelancers and journalists from small outlets who need to embark on this type of journey. And there is no doubt among journalistic security experts: freelancers or reporters from newsrooms with fewer resources are more exposed to the risks of covering conflicts.

“The less money you have, the more at risk you put yourself. Having little money, you try to extract as much as possible. You'll work hours and hours, you won't have the safest car, you won't have the best fixer. And then he makes mistakes he shouldn't make,” Boechat said.

Even when journalists are working in their own cities and might know the terrain without the need for a “fixer,” there are still disparities. Reporters from larger news organizations might be better trained in safety measures or have more adequate equipment than freelancers or reporters from smaller outlets, who don’t have many resources.

The decision not to go

Even taking all possible precautions and adopting the most varied security measures for risky coverage, journalists need to feel comfortable to make a choice that seems frustrating, but sometimes imposes itself as the most appropriate decision to preserve life: the conclusion that the desired story is not worth covering.

“This is a brave thing to do, not a cowardly thing. I should have done it in Iraq and elsewhere, stopped and thought, 'this is too dangerous.’ Making this decision is important,” Smyth said.

Severino Silva agrees: “no image is worth your life (...) if your heart is there and you don't feel safe, don't go.”

*This is the fifth report in a project on journalist safety in Latin America and the Caribbean. This LatAm Journalism Review project is funded by UNESCO's Global Media Defense Fund.