Between 1995 and 2018, 64 communicators – journalists, broadcasters and bloggers – were murdered in Brazil because of their profession. In half of those cases, those responsible were identified and a complaint was filed by the public prosecutor’s office. However, 16 continue under investigation and seven were closed without being resolved.

The report was released on April 30 at the headquarters of the CNMP, in Brasilia, at a celebration for World Press Freedom Day, commemorated on May 3. It is the first time that official data from the Brazilian State on judicial processes of murders of communicators has been gathered in a single publication, according to the CNMP. 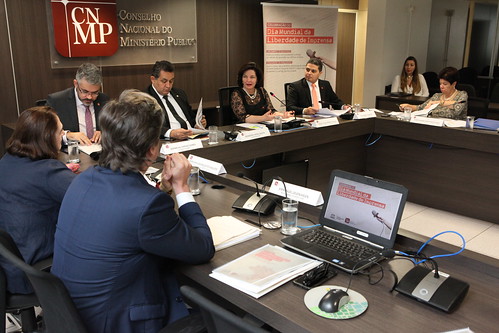 Raquel Dodge (center), president of the CNMP and general prosecutor of the Republic, launching the report "Violence against communicators in Brazil: a portrait of investigation in the last 20 years". (Photo: Sergio Almeida / CNMP)

The report presents the current status of investigations and judicial processes of the 57 cases in which it was possible to obtain information. Of these, 32 are considered "solved" because the circumstances were investigated and those responsible were reported to the court by the public prosecutor – although this does not mean that a trial occurred and that the accused were convicted.

However, according to the document, "the presentation of criminal action [by the public prosecutor] is still the best indication of the ability to solve a crime and the effectiveness of the investigation carried out."

Another 16 cases are "in progress," with the police investigation still ongoing. Among these are murders that occurred more than five years ago, such as that of Jeolino Lopes Xavier, who died on Feb. 27, 2014 in Teixeira de Freitas, Bahia. According to the report, he "acted as police reporter for the radio station Caraípe FM and was the founder of Portal N3." On March 12, 2019, the date the latest information was gathered by Enasp, the investigation into Xavier’s case was still open at the police station.

Two cases were considered “partially solved”: that of Manoel Leal de Oliveira, who died on Jan. 14, 1998 in Paulo Afonso, Bahia, and Luiz Otávio Monteiro, who died on Dec. 29, 1998 in the State of Amazonas, in the state of Amazonas. In these, the alleged authors were denounced, but those who ordered the murders were not identified, according to the report.

Seven cases were considered "unresolved" because the investigation was closed without identifying those responsible for the crime.

"Almost all of the violent acts analyzed occurred far from the big urban centers, involving journalists, press professionals and autonomous communicators or those belonging to small media groups, many of them bloggers and radio journalists," the document said. This would contribute to impunity in the cases because they end up having little repercussion and because the police "in the corners of the country" have structural deficiencies, such as few human and material resources to do their work, the report stated.

The murders computed by the report happened in 19 of the 27 federal units of Brazil. Rio de Janeiro appears as the most deadly state for communicators, with 13 murders in the period analyzed. Next came Bahia, with seven, and Maranhão, with six. In the southern region, only Paraná reported murders of communicators, with two occurring in the state.

Prosecutor Emmanuel Levenhagen Pelegrini, one of the authors of the report, told the Brazilian Association of Investigative Journalism (Abraji) that "in this first moment, the report will serve as a source of information for state public prosecutors and civil society to press for greater speed in the judgement of these cases, if they deem it necessary.”

In December 2018, Pelegrini spoke to the Knight Center about the proposed recommendation for the country's public prosecutors to prioritize the criminal prosecution of crimes against the lives of communicators, presented last May during a meeting of the CNMP. The proposal was discussed at the event to launch the report by Raquel Dodge, president of the CNMP and general prosecutor of the Republic, who said that the proposal will be voted on by the CNMP plenary soon, according to Abraji.