In an historic decision, the Inter-American Court of Human Rights (Inter-American Court) found the Colombian State responsible for the violation of several rights of journalist Jineth Bedoya Lima as a result of her May 2000 abduction, torture and sexual assault in retaliation for her journalistic work.

“October 18, 2021 goes down in history as the day when a fight, which began due to an individual crime, led to the vindication of the rights of thousands of women victims of sexual violence and of women journalists who give up part of their lives. in their trade,” Bedoya Lima wrote on her Twitter account. 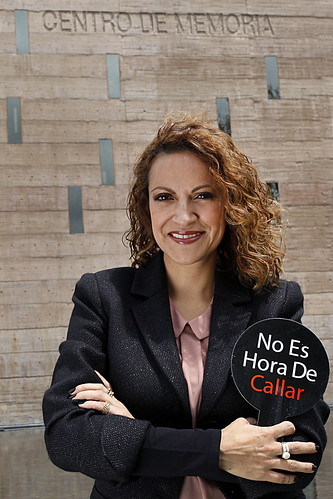 The decision of the Inter-American Court was published on Oct.18, but was made by the Court on Aug. 26. In it, the Court indicates that the State is responsible for the violation of different rights, including personal integrity, personal freedom, honor and dignity, and freedom of thought and expression of Bedoya Lima.

In its sentence, the Court determines that the journalist “was subjected to acts of physical, sexual and psychological torture, which could not be carried out without the acquiescence and collaboration of the State, or at least with its tolerance.”

It also considered that Colombia was responsible for “the violation of the rights to judicial guarantees, judicial protection and equality before the law due to the lack of due diligence in the investigations carried out on said facts, the discriminatory nature of said investigations on the basis of gender and the violation of the reasonable time,” according to the official summary of the decision published by the Court.

The Court also tried and found the State guilty for the failure to investigate the threats that the journalist received before and after the events of May 25, 2000. Finally, the Court also declared that Colombia was responsible for the violation of rights to personal integrity, honor and dignity, as well as to judicial guarantees and protection of the journalist's mother, Luz Nelly Lima.

As part of reparation measures, the Court determined that the State should continue to investigate and should try all those responsible for the crimes committed on May 25, 2000, as well as for the threats and attacks that occurred before and after that date. Colombia is also obliged to guarantee the life and safety of the journalist and her mother.

Likewise, the Court decided that the State should implement a training and awareness plan for public officials, security forces and justice operators “to guarantee that they have the necessary knowledge to identify acts and manifestations of violence against women based on gender that affect women journalists, to protect them [women journalists] in dangerous situations and to investigate and to prosecute the perpetrators.”

Colombia must create the Investigative Center No es Hora de Callar (It is not time to shut up), a center for “memory and dignity of all women victims of sexual violence in the context of the armed conflict and of investigative journalism with specific recognition of the work of women journalists.”

“No es Hora de Callar” is the name of the campaign created by Bedoya that aims to encourage women victims of violence, especially in the context of the armed conflict, to report.

Along the same lines, Colombia must create a fund to finance programs aimed at the “prevention, protection and assistance to women journalists who are victims of gender-based violence in the exercise of their profession, as well as for the adoption of effective protection measures to guarantee the safety of women journalists who are subject to a special risk due to the exercise of their profession, from a gender perspective.” According to the Court, the amount for the constitution of the fund must be US $500,000, and in the decisions of the fund there must be delegates from the campaign “No es hora de callar” and the Press Freedom Foundation (FLIP, for its acronym in Spanish).

The Court determined that the State must guarantee the dissemination of the program “No es hora de callar” that must be broadcast through the public media system and with content lasting at least 60 minutes per month for five years “in order to raise awareness regarding the rights of women in the exercise of journalism in Colombia.”

Finally, it will have to compensate Bedoya Lima and her mother with US $30,000 each.

21 years in search of justice

The decision of the Inter-American Court is historic, and also represents for the journalist the culmination of her 21-year struggle to find some justice for her crime.

Bedoya Lima, current deputy editor of the newspaper El Tiempo, was abducted at the entrance of the Bogotá Modelo prison on May 25, 2000 as part of the investigation into the death of 26 inmates and alleged arms trafficking within the prison.

During her approximately 10-hour abduction, she was tortured, beaten and sexually abused. She was later abandoned on a road near the city of Villavicencio, department of Meta.

In all these years, only three people have been convicted in her case.

“But the masterminds of the abduction and everything that happened remain in impunity,” Bedoya Lima told the Knight Center’s Journalism in the Americas blog in 2017. “They have not been made known, they have not been prosecuted, they do not have processes in the Colombian justice system and that is one of the strongest points of impunity in the case that undoubtedly affects me, my family and my entire social circle very much.”

According to what the journalist said at the time, due to the impunity that her case always had, she dedicated part of her life to investigating her own crime. Her investigations as well as information from the Prosecutor's Office indicate that at least 27 people were involved in the crime against her, among them state agents.

For this reason, since the Inter-American Court announced that it would hear her case, it was known that the case would be historic. This was the first time that the Court would decide on violence against women journalists in the context of the armed conflict. It was also the first time that Colombia had been tried for a case focused on sexual violence.

The hearing before the Inter-American Court, scheduled for March 15, 16 and 17, 2021, was marked by scandal and outrage after the representatives of the Colombian State abandoned it, claiming partiality on the part of the Court. They cited expressions of solidarity given by some magistrates after Bedoya's detailed account of what happened to her.

Although the hearing was suspended for a week, it was resumed with the presence of the State on March 22 and 23.

Both FLIP and the Center for Justice and International Law (CEJIL), organizations that represented Bedoya in the Inter-American Court, spoke about the decision.

“Jineth Bedoya has been tirelessly seeking justice for more than 20 years and has become a symbol and reference in the fight against sexual violence, particularly in relation to women journalists,” the organizations wrote in a statement. “This decision of the Inter-American Court is dignifying not only for Jineth, but it represents hope for the thousands of victims of sexual violence during the Colombian armed conflict.”

Since the afternoon of Monday, Oct. 18, the hashtag #TriunfamosPorqueNoCallamos (We triumph because we don’t shut up) began to go viral on Twitter in Colombia.