Two important cases for freedom of expression on the continent were heard during the most recent Period of Sessions of the Inter-American Court of Human Rights (I/A Court HR) that ended on June 25.

The first of them has to do with the right of Indigenous peoples to found media outlets, and the second is related to the case of the newspaper El Universo in Ecuador, which received a multi-million-dollar fine after a complaint from previous President Rafael Correa.

The case of the Kaqchikel Mayan Indigenous Peoples of Sumpango v. Guatemala was presented by the Inter-American Commission on Human Rights (IACHR) before the Court on April 3, 2020, and is the first of its kind heard by the court.

As the IACHR considered in its report on the merits, the State of Guatemala "is responsible for the violation of the rights to freedom of expression, equality before the law, and cultural rights to the detriment of the four Indigenous peoples in the case." These peoples are Kaqchikel Maya, Achí Maya from San Miguel Chicaj, Mam Maya from Cajolá and Maya from Todos Santos de Cuchumatán, which for almost 12 years have been trying to access radio frequencies.

The events date back to 2011 when the radio stations filed an appeal for partial unconstitutionality of the General Telecommunications Law before the Constitutional Court of Guatemala. One of the articles mentioned is Article 62, which establishes the concession of frequencies through a public auction process, that is, with an entirely economic criterion. This, according to the petitioners, puts Indigenous peoples at a disadvantage because they cannot compete with economic groups. 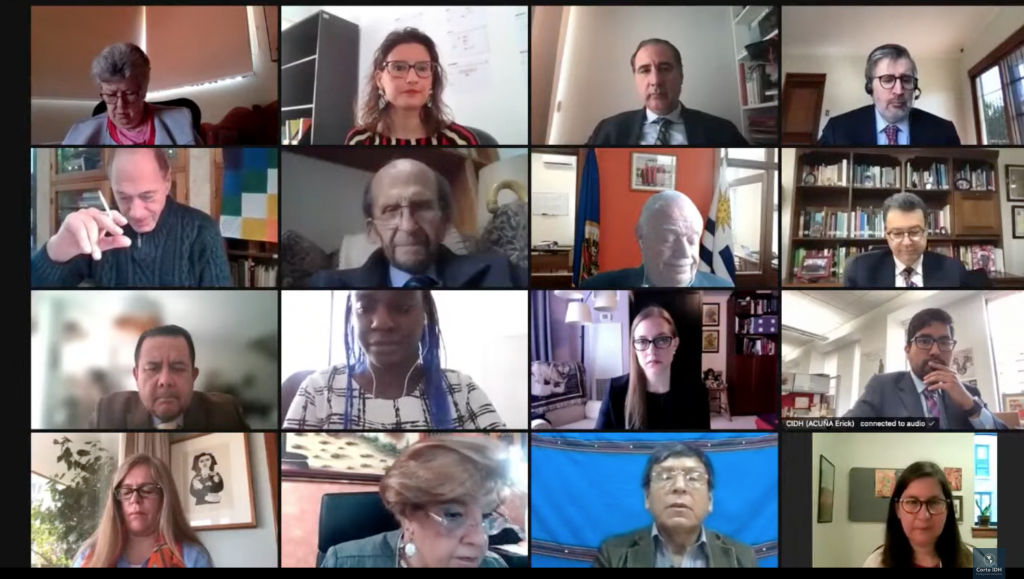 According to information provided to the IACHR, between 2008 and 2015, at least 13 raids were recorded in 12 community radio stations. The results vary from cutting electricity, to seizure of equipment, as well as the arrests of employees and volunteers who are charged with the criminal offense of "theft" and "illegal use of frequency."

One of the people who testified during the hearing before the Inter-American Court was Anselmo Xunic Cabrera, a volunteer coordinator of Radio Ixchel, which was raided on July 7, 2006. The coordinator was prosecuted for the alleged crime of theft for "operating a community radio station without a license." A judge determined that there were no "rational elements" to bind him to the process.

"We are not asking for 20, 30 or 40 community radio stations," Anselmo Xunic Cabrera said at the hearing on June 9. “Our struggle is based on a right of the peoples.”

“What we want are stations for the entire country, for all municipalities. If there are more than 300 municipalities in Guatemala, our need is for there to be a minimum frequency for each of the towns that make up Guatemala.”

The IACHR established "that Indigenous peoples in Guatemala are in a structural situation of social exclusion, discrimination and poverty, which is manifested in their participation and representation in the media."

For the Commission in the country, there are legal obstacles to accessing the radioelectric spectrum and this prevents the Indigenous peoples of the case from “the preservation, maintenance and promotion of their culture and Indigenous languages, as well as the dissemination of their music and traditions through community radio stations, which are essential tools for such purposes.”

Finally, it considered that the State has not taken measures (neither in legislation nor in policies) to remove these barriers. On the contrary, for the IACHR, there is a “strong criminalization” of community radio stations in Guatemala.

“The Commission considered that the use of criminal offenses such as theft, aimed at punishing the use of the radioelectric spectrum by two of the Indigenous peoples in the case, was contrary to the requirements established in Article 13.2 of the American Convention on subsequent liability,” according to a statement from the IACHR.

During the hearing, the Indigenous peoples requested the legal recognition of community radio stations as key tools for exercising freedom of expression and reaching communities.

Case of El Universo and its "disproportionate" sentence

The Inter-American Court also heard the case of Palacio Urrutia et al. v. Ecuador in which it will analyze the alleged human rights violations that occurred in the criminal proceeding initiated by former President Rafael Correa against the journalist Emilio Palacio Urrutia and the directors of the newspaper El Universo, Carlos Nicolás Pérez Lapentti, César Enrique Pérez Barriga and Carlos Eduardo Pérez Barriga, in 2012.

Former President Correa's lawsuit originated in an opinion column published in 2011 by Palacio Urrutia related to an alleged coup attempt that occurred on Sept. 30, 2010. The column was titled "“No a las mentiras” (No to lies) and was published in newspaper El Universo.

Correa rejected what was expressed in the column and considered that they affected his reputation, which is why he sued in March 2011. After going through different instances, in February 2012 the Specialized Criminal Chamber of the National Court of Justice ratified the ruling against the newspaper and the directors, sentenced to three years in prison and a fine of US $40 million.

“The Rapporteurship understood that the process was irregular, that criminal law was used to sanction an opinion against a president who is precisely one of the highest public officials and that freedom of expression protects such criticism and opinions,” Edison Lanza, then-Special Rapporteur for Freedom of Expression of the Inter-American Commission on Human Rights (IACHR), told LatAm Journalism Review (LJR) in February 2020.

The merits report of the IACHR also established that “the state [of Ecuador] violated the rights to freedom of thought and expression and the principal of legality and retroactivity of the journalist and three executives in question, due to the ambiguity and broad scope of the article of the Criminal Code that was applied, the severity of the criminal sentence, and the exorbitant amount (US $40 million) that the victims were fined, which were unnecessary and manifestly disproportionate sanctions due to their excessiveness.”

The case was presented by the IACHR to the Court on Oct. 16, 2019. According to what Lanza told LJR in 2020, they sent the case to the Court because Ecuador did not comply with the recommendations given in the merits report. Among the recommendations was the annulment of the sentence, the payment of reparation for the damage committed and carrying out legal reforms that decriminalize the crimes of desacato and injuria.

During the hearing that took place on June 14 and 15 of this year. Palacio said that he had suffered psychological and physical damage during his "forced exile" in Miami, United States.

“A climate of fear was established in Ecuador, there were ten murders of critics of the Government. Then I realized what he was playing at me: that I leave Ecuador or that they kill me. That's why I left,” Palacio said before the Court. 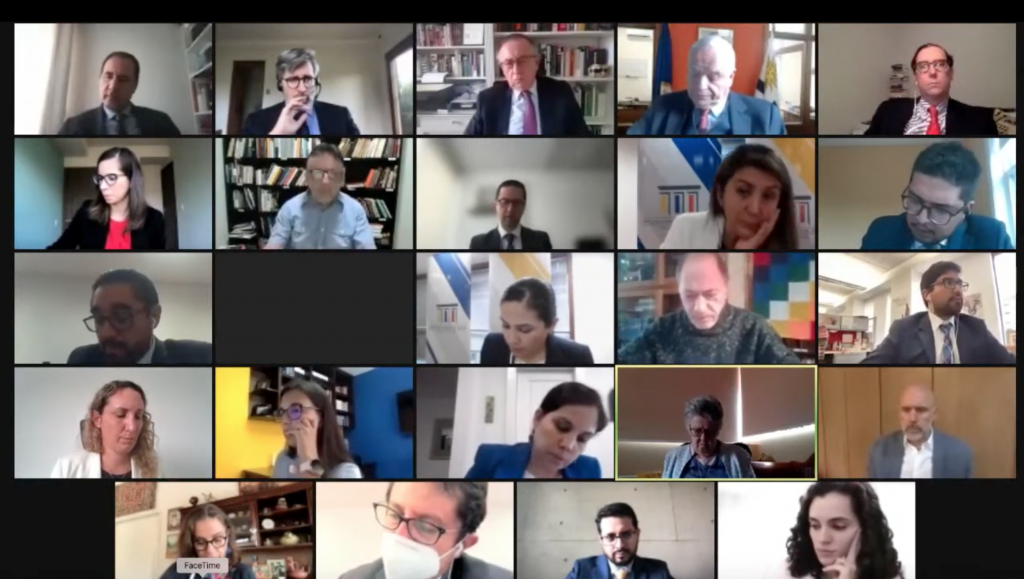 The journalist said that in the country there was a climate of general fear among advertisers, which prevented him from continuing to become a journalist abroad.

For his part, César Pérez, director of El Universo, referred to the hostile relationship that the ex-president had with journalists and with them in particular. He assured that in the Saturday broadcasts, Correa issued "insults” against them.

"He called us corrupt, that we are useless, miserable, hypocritical, cynical, horrible chubby, he told one of our journalists, he called El Universo perverse (...) my children witnessed all these attacks, this humiliation from power,” he said before the Court.

Despite the fact that the ex-president forgave the sentence, according to Pérez, this did not work.

“Hopefully that sentence can be erased so that no one even dares to cite it as jurisprudence (…) I hope that the Court does justice, the justice that I did not find in my country, and that it is a sentence that deepens and establishes jurisprudence not only in Ecuador, but at the regional level, in favor of the free exercise of freedom of expression," he added.

The decision of the Inter-American Court for each case could be handed down by the end of the year.