On Aug. 31, 2002, a seminar for journalists entitled 'Investigative Journalism: Ethics, Techniques, and Dangers' took place in Rio de Janeiro, Brazil. The activity was promoted by the then-nascent Knight Center for Journalism in the Americas, and the date was marked as Center's first step on its path to support journalism in Latin America and the Caribbean. Twenty years later, the Knight Center celebrates the expansion of its initial mission to strengthen journalism around the world. 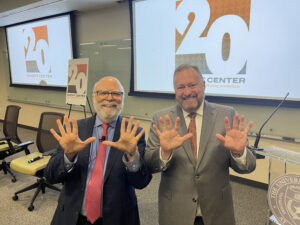 On Aug. 31, 2022, the Knight Center's journey and impact were celebrated during a special seminar held at the University of Texas at Austin, home of the Center founded by Rosental Calmon Alves, who holds the UNESCO Chair in Communication and the Knight Chair in Journalism at the Moody College of Communication's School of Journalism.

Bernhardt turned the floor over to Rosental Calmon Alves, director of the Knight Center, who thanked the University of Texas at Austin for its two decades of support for the Center.

“I believe that only a university that prioritizes innovation and entrepreneurship so much that it adopts the motto ‘what starts here changes the world’ would have given us the space and the conditions to carry out the kind of work we do at the Knight Center,” Alves said.

The event was also attended by Jim Brady, vice president of journalism at the Knight Foundation, the organization responsible for the initial grant that made the founding of the Knight Center possible and which has continued to support the Center for the past twenty years. Brady had a message from Alberto Ibargüen, president of the Foundation. 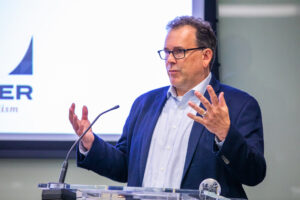 “It is tempting to stop the evaluation at the number of journalists trained, the variety of conferences sponsored or the number of courses offered. Much more important in my view are two different metrics: one is Rosental's and the Knight Center's embrace from the beginning, and long before it was viewed as inevitable or popular, of the new technology that has transformed media and is impacting our understanding of democracy. The other is the contributions journalists have made in their communities throughout this hemisphere thanks to the engagement with the Knight Center at UT,” Ibargüen said in his message.

“Even before I came to the Knight Foundation, I admired Rosental's dedication to journalistic ideals and in training journalists and service to their communities. As president of the foundation I have been proud of the fact that he is the holder of a Knight endowed chair in journalism. Knight has supported and will continue to support this essential work.”

Brady recalled the terms under which the first grant was awarded, concluding that “it’s clear that the impact of the Knight Center has far exceeded the modest expectations that were set by us when we gave the grant.”

“The Knight [Foundation] is proud to have been strong supporters of the Knight Center and we look forward to continuing that strong support as you guys enter your third decade of existence," Brady said, thanking Alves and the team for their work.

Impact on careers and lives

The focus of this special Knight Center 20th Anniversary seminar was on the impact the work led by Alves has had on journalism and the lives of professionals around the world.

A video shown at the event titled "20 Years Strengthening Journalism in the Americas" gathered testimonials from professionals in Latin America on how the Knight Center has enabled several connections and accomplishments in the region over this period.

Alves also shared testimonials from journalists from different countries about how massive online courses (MOOCs) have given direction to their careers. Among them are Graziela França, who told how a MOOC on data journalism led her to found Agência Tatu, the first data journalism agency focused on covering the Northeast region of Brazil. Also Tiago Rogero, director of award-winning Brazilian podcasts such as Vidas Negras (Black Lives) and Negra Voz (Black Voice) and the recently released Projeto Querino, who told how he learned to make podcasts through a Knight Center MOOC.

In addition, Janine Warner, co-founder and director of SembraMedia; Marco Tulio Pires, manager of the News Lab at Google; Sandra Crucianelli, manager of the data center at the Argentine portal Infobae; and Cindy Royal, professor at the School of Journalism at Texas State University, were present at the seminar to talk about the Knight Center's impact on their careers.

“I think the secret of your success is connecting us, inspiring us, helping us meet others and helping us go on to inspire others," Warner said. “When I talk to people in Latin America, they all jump in [to talk about the impact Rosental Alves and the Knight Center have had in their lives]. You can't possibly with a dozen testimonials, or a hundred and twenty, do justice to the personal impact you've had,” she told Alves and the Knight Center staff. 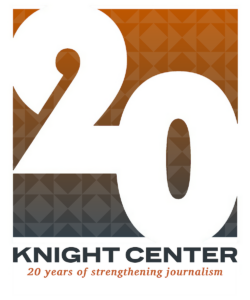 She recalled that the Knight Center began with a focus on Latin America and the Caribbean and on organizational capacity building, helping journalists in the region to develop self-sustaining organizations dedicated to improving journalism and defending press freedom. The first such organization to emerge with the Knight Center's support was the Brazilian Association of Investigative Journalism (Abraji), whose beginning also coincides with the seminar held in Rio de Janeiro on Aug. 31, 2002. Besides Abraji, associations such as the Foro de Periodismo Argentino (Fopea), Consejo de Redacción, in Colombia, and the Foro de Periodistas Paraguayos (Fopep) also had the support of the Knight Center in their development.

Tenore reminded us that a "hidden treasure" of the Knight Center are the self-directed courses. At the moment, more than 60 courses are available for free on the JournalismCourses.org website, and can be taken at any time by anyone who is interested.

The conferences promoted by the Knight Center have also consolidated themselves over the last twenty years as spaces for meetings and debates at a global level on the main challenges in journalism. Among them are the International Symposium on Online Journalism (ISOJ), which in 2022 reached its 23rd edition, having been created even before the Knight Center; the Ibero-American Colloquium on Digital Journalism, which had its 15th edition held this year; and the Latin American Conference on Diversity in Journalism, whose second edition will take place on Sept. 9 and 10, 2022.

The associate director of the Knight Center also highlighted the Center's publications, such as #ISOJ, the official academic journal of the International Symposium on Online Journalism, which gathers research on innovation in journalism. She also spoke of the LatAm Journalism Review, the Knight Center's digital journal focusing on journalism and press freedom in Latin America and the Caribbean and published in Portuguese, Spanish and English. Tenore also highlighted another "hidden treasure" of the Knight Center: a library of 39 free e-books containing original content produced by the Center's staff and collaborators on various topics.