Newspaper La Prensa of Nicaragua circulated in print for the last time on Aug. 12, at least temporarily, due to the lack of raw materials, the publication reported. In fact, the last edition could not be printed completely and only had eight pages. Additionally, newspaper Hoy – of Grupo Editorial La Prensa – could not be printed, according to an editorial in the publication.

La prensa said it will continue to report through social media and its website.

According to the 95-year-old newspaper, the country's Directorate General of Customs (DGA, for its acronym in Spanish) keeps "the raw material owned by this company sequestered in a tax warehouse." 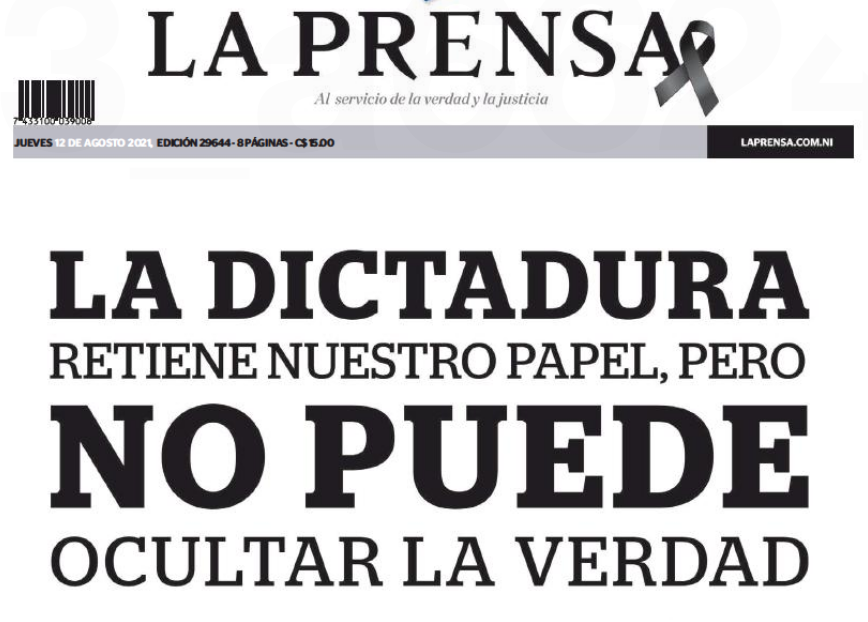 The supplies necessary for printing enter the country through the Port of Corinto and go to a tax warehouse while the company requests an import exemption, the newspaper explained. The right to tax exemption for imports of media, whether radio, television or print, is stipulated in Article 68 of the Political Constitution of Nicaragua.

According to the newspaper, since July 26, it has requested the exemption of 31 packages with 62 rolls of newsprint, but so far they have not received a response from the DGA. The newspaper said authorities cannot take more than 10 days to respond to the request under the law, but at this time it has been 18 days.

La Prensa also explained that they have sent letters to the DGA as well as messages via WhatsApp to the general director of the entity, but so far they have not received a response.

This is not the first time that La Prensa has had its raw material retained. On Feb. 6, 2020, the DGA finally released tons of paper and other supplies that were held for more than 500 days, without any explanation. At that time, the DGA withheld 92 tons of newsprint, 49 tons of printing paper, plates, gums, press developer, belts, ink and spare parts that had arrived in 10 shipments, the newspaper reported.

In all, La Prensa has seen the retention of paper and other supplies for 75 weeks between 2018 and 2020, according to the editorial.

For this reason, the newspaper decided to make smaller imports, but in shorter time intervals. "However, the delays in customs have continued when the exemption is requested by law," La Prensa reported.

For example, in June of this year, La Prensa reported a delay in customs, but the next day the supplies were released.

“On this occasion, the response from the DGA has been the most delayed, which has forced La Prensa to stop circulating. The paper owned by La Prensa is in the country and only the blockade of the dictatorship prevents the newspaper from being able to use it to print both La Prensa, as well as Hoy,” the newspaper wrote.

On the Aug. 12 cover, the newspaper reported on this situation with the headline "The dictatorship retains our paper, but cannot hide the truth." And it added "they will not shut us up." It reported that until supplies are released, both social networks and the website "will continue to provide news and denounce the abuses of the regime against democracy."

"We condemn the hostile and anti-freedom of the press attitude of the government of Daniel Ortega and Vice President Rosario Murillo, who are betting on economic suffocation and the constant attacks against journalists and the media," said Jorge Canahuati, president of the Inter-American Press Association, in a press release.

Attacks on independent media in Nicaragua have been rampant in recent years.

Newsrooms for Confidencial and 100% Noticias have been raided and taken over by the government.

Numerous journalists have left the country due to threats and attacks on the press and La Prensa itself recently reported that various outlets are not including writer bylines on reporting because of aggressions against independent journalism.

Some journalists have even been targeted with criminal investigations, which international organizations call an attempt to silence dissent and the critical press.