Collaboration and reporting in a network, those are the words that could summarize the four days of the First Latin American Journalism Meeting to investigate Corruption from different points of view (ELPIC, for its acronym in Spanish). A virtual event that brought together journalists from Latin America and the world, it placed the global tentacles of corruption under the magnifying glass.

A theme that was repeated throughout each of the discussion tables is the importance of collaborative work and the need to leave behind that figure of the journalist as a lone wolf who does their work in a standoffish and individualistic way.

"If criminal networks work in a network, we as journalists also have to work in a network," said Gustavo Faleiros, environment investigations editor of the Pulitzer Center and co-founder of InfoAmazonia, while moderating the conversation on how to investigate corruption in the Amazon.

Table at ELPIC: "The human challenges of investigating corruption" (Screenshot)

Reporting in a network, according to the attending journalists, allows investigations to have a greater impact. But, it also helps reduce physical, legal, personal and even digital risks. This was explained by Emilia Díaz-Struck, ICIJ investigative editor.

“Collaboration, finding that we are not alone, is a change in the model of how we now work on journalistic investigations and this helps us to manage, in the best possible way, the different types of risks that we face. Even getting allies and publishing together serves as an umbrella that helps reduce risks,” Díaz Struck explained during her participation in the panel dedicated to the human challenges involved in investigating corruption.

During the meeting, more than 15 live activities were carried out: conversation tables, analysis of investigative cases, analysis of methodologies, sessions on the use of tools and specialized workshops.

Milagros Salazar, director of Convoca and leader of the meeting, presented the event as an opportunity to redouble efforts and promote a space for reflection on the great challenge that exposing corrupt practices implies for investigative journalists. Even more so considering that these practices have the endorsement, worldwide, of a complex financial, economic and political system.

In the presentation entitled "Conflicts of interest and social impact of the extractive industries,” Venezuelan journalist Joseph Poliszuk highlighted the value of collaborative work and the paths it opens, giving as an example his report on coltan trafficking in Venezuela bound for South Korea.

Thanks to the intermediation of the ICIJ, Poliszuk was able to come into contact with a Korean journalist who helped him close the story by overcoming language and cultural barriers. To which he added: "Creating networks is something we try to do in countries where freedom of expression and the free flow of information have been violated."

Journalism and authorities: a key collaboration

The meeting not only discussed the benefits of collaborative work between journalists; the importance of making alliances with other disciplines, institutions and people affected by corruption was also highlighted.

For example, in the case of Lava Jato, one of the largest corruption operations in recent Latin American history, the meeting point between journalism and the judiciary has been key. 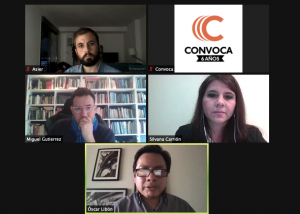 “The alliance between journalism and authorities, in fact, is a strategic alliance. Because there is an investigative, cooperative and collaborative journalism, which not only shows news, but also shows an in-depth report with certain elements that serve to establish a line of investigation and from there the work of the judicial institutions continues. In the Lava Jato case, in Peru, collaboration with the press was essential,” explained Silvana Carrión, ad hoc attorney for the Lava Jato Case in Peru, as she was a member of the table dedicated to cross-border investigations on money laundering.

This relationship between the judiciary and journalism also happened in the investigation known as the FinCEN Files, a massive leak of documents from FinCEN, the U.S. agency for combating money laundering, terrorist financing, evasion of economic sanctions and other financial crimes, which has served as a starting point for new judicial investigations.

It’s a project that counted on more than 400 journalists from 88 countries and that would not have been possible without the collaboration between journalists and other disciplines.

“It is difficult for journalists to investigate organized crime when it relies on financial spheres and this work made it possible. Furthermore, a lot of coordination between the authorities and journalists is required,” commented Miguel Gutierrez, Convoca.pe collaborator.

It takes more than a pencil and a notebook

The opening table of the meeting brought together renowned journalists such as Paul Radu, co-founder of OCCRP; Sasha Chavkin, OCCRP journalist on environmental issues; Gerardo Reyes, director of the Univision investigative team and Milagros Salazar, director of Convoca Perú. They attempted to answer the question of how the tentacles of corruption spread in the world; The importance of reporting in a network and working hand in hand with technology was also emphasized.

“On the side of corruption, there are many resources and technology. Organized crime groups for decades have worked with technology and, therefore, have more experience… On the journalism side, there are many investigations but the impact is limited. We must seek to do more collaborative and networked projects such as the Panama Papers, to gain the trust of the audience,” Radu said. 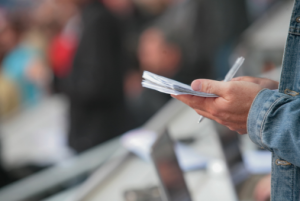 For the investigative journalist of these times, the notebook, paper and the search for journalistic archive material are elements that already fall short, so the knowledge and support in technological tools is vital to find the stories and the facts that will become future revelations.

An example of the scope and relevance of new technologies within journalism occurs in the investigation of environmental issues related to extractive activities, such as illegal mining, and irreversible damage to the ecosystem that it causes, as mentioned by the participants of the table dedicated to this area.

In this sense, they mentioned that access to data and satellite images has been essential for reporting in protected natural reservoirs, in remote areas with a high level of risk due to occupation by criminal groups or in a territory as extensive as the Amazon. Given the difficulty of reaching these places or the danger that this entails, satellite images allow journalists to obtain information in the past and present to monitor these geographical points and to be able to assess the damage to which they have been subjected.

However, many times, the use of technology in journalism can be expensive. This was discussed during the table entitled "The use of technology to investigate large corporations." Álvaro Justen, developer of the Brazilian Association of Investigative Journalism (Abraji), commented that technology tends to be more expensive than journalistic work itself because it usually takes a greater number of people to develop it.

"However, the tools must be made available to journalists who do not work with data, holding workshops in newspapers and newsrooms so that they learn about the different available tools."

During the four days of the event, at several of the conversation tables, it was brought up how the current chaos in the world has served as fertile ground for corruption and disinformation.

Journalist Gerardo Reyes did not miss the opportunity to open the debate on fake news and readers’ loss of confidence in journalism.

“Now journalists not only do the job of reporting, but of begging people to believe us. The stories are now also subject to a judgment on who did them and what interests the person who wrote them has,” Reyes explained

The issue was also debated during the round table "When corruption infiltrates an electoral campaign" since, according to the speakers, an increase in false news is noticed precisely during electoral times because they divert attention from what is being talked about.

"Unfortunately, we have faced a new form of corruption, which is the publication of fake news," said Christopher Acosta, a Peruvian investigative journalist and writer of the book ‘Plata como cancha: Secretos, impunidad y fortuna de César Acuña.’ The journalist was sued by Acuña for alleged defamation and the former presidential candidate demanded compensation of about US $26 million.

The speakers at ELPIC agreed that society increasingly demands more from journalists and that only through the creation of bridges and the massification of collaborative and networked work can the trust of readers be regained.