Learning is the key to covering disability from the perspective of solutions: say panelists during conference on diversity in journalism

Cover disability from the solutions. That was the theme of the last session of the First Latin American Conference on Diversity in Journalism that took place from March 26 to 27 completely online.

The conference was organized by the Knight Center for Journalism in the Americas with support from Google News Initiative.

Priscila Hernández; academic and journalist, contributor to the magazine Nexos of México and moderator of the panel; began with a small explanation about the need to cover the issue precisely, which allows finding a solution to avoid "the amount of errors" with which journalism is done. According to Hernández, it’s necessary to do an initial exercise to think about how "we approach the issue of disability from our newsrooms,” that is, to understand that "our newsrooms build journalism from prejudices."

For Hernández, asking questions about whether the disability is seen as a condition or a disease, whether it produces fear or sadness and even what the personal history has been with the disability, can begin to open that path of understanding. "I have a personal invitation for this space [the panel] to serve to know how our prejudices, fears, ignorance can be later published in our stories and in our articles," Hernández said. 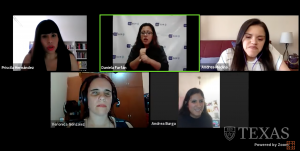 She added that according to hers analysis, currently disability is covered from two extremes: as charity and pity –  looking down, or as superheroes – upwards.

"The mistake is that we lose the nuances [...] we are losing the perspective of human rights," said Hernández, who offered some advice to improve coverage. The first, accept that you do not know the subject and ask for help.

The need to learn is a concept shared by all three panelists. For journalist Andrea Medina; founder of Integrados Chile, a site that seeks to empower people with disabilities through information; her own process began with self-recognition as someone with a disability.

Medina explained the perfect model of society that she called the "rights model" in which inclusion prevails "where each and every person is in this society without anything mattering. We are all known as diverse and for that reasonable adaptations or adjustments are made so that we can participate on equal terms.”

In the search for this model, Medina said that media play an important role in eliminating barriers and disseminating how barriers are eliminated. A first point, she said, is the use of language. "I don't know if you can fly, I can't," she said jokingly, referring to the phrase "people with different abilities" used by some media. She proposed changing that phrase and words such as “disabled” or “invalid” to “people with disabilities” or “in a situation of disability.” Or words like “crazy” or “insane” for “person with a mental disability,” among other examples.

She also pointed out some specific actions that newsrooms could carry out towards this “rights model.” Consider accessibility not only understood from the physical part, such as a ramp, but other actions such as including sign language interpretation at events or places. Or consider a feminist newsroom with equity where people with disabilities are the protagonists.

The blog ConCapacidad from Peruvian journalist Andrea Burga Villanueva was born due to the invisibility that the issue of disability has in her country, according to its creator. During her professional training process, the journalist also recognized herself as a person with a disability while she saw how her colleagues and even her professors understood very little about the subject. "That prompted me to say, ‘I want to talk about this.’"

However, when she tried to find work as a journalist in traditional media, she found that they did not want to hire her. "They told me 'we are not prepared to hire a blind person, we do not have the resources.'" She even recalled how an editor told her that if she worked there, it would be news. "I was left with the idea that for her and for the newspaper, I was more a news item and not a content creator," she said.

In the midst of this “frustration,” the blog was born to address the issue of disability with an intersectional approach, that is, where a person with a disability can also be understood as an Indigenous woman, as a member of the LBGTI community, among others. That is why it covers issues that are invisible even within the coverage of disability: access to contraceptives by women with disabilities, for example, "because they are sometimes seen as asexual," she said.

One of the aspects that Burga sees with the most concern is the mocking of people with disabilities. As an example, she showed a magazine cover showing short people with the faces of the presidential candidates with the phrase "little, but sassy." “As a device to ridicule the presidential candidates. This is how the issue of disability continues to be seen in my country,” she said.

For Verónica González, communication coordinator of the National Disability Agency of Argentina, who was a journalist and presenter on public television in her country for several years, since she studied journalism she knew that one of her objectives was to help break stereotypes.

However, one of the issues she advocates the most is the possibility of covering journalistic issues that go beyond disability. For example, she was able to work on issues such as gender and human rights.

“We cannot think that the only issue that journalists with disabilities can work on is disability. We can work on any subject,” she said.

González detailed some of her work processes as a journalist, such as, for example, in the middle of investigations that had a high judicial burden, she worked with a colleague who read the files to her.

“I am not telling you this to explain my work experience. It is to think that an inclusive newsroom is possible. And that it is possible to incorporate a person with a disability who can work on equal terms with others,” González said. "Ultimately, I wanted to do quality coverage, work on investigation and produce information that is useful in communication matters."

One of the aspects with which the panelists agreed is the difficulty that people with disabilities have entering traditional media. For Andrea Medina it has to do with the fact that most people “are not trained in an inclusive context where they see people with disabilities as equals”, and in that sense it is difficult to create “inclusive environments in all their contexts throughout their lives.”

Verónica González also believes that it is necessary to listen. According to her, many times she has been told that she cannot cover certain topics, thinking of her safety. She said that there is a kind of infantilism, in putting them in the position of "eternal girls" to be cared for. "I'm never going to put myself at risk for coverage," she said. “We don't have to be careful with ourselves, we know what we can and cannot do. And in any case we will take the necessary precautions ”.

The panel counted on the sign language interpretation of Daniela Farfán.

If you missed the conference, you can view the entire event on the Knight Center’s YouTube page, and the panel on Disability here.