YouTube, the second most popular site on the Internet, has become so ubiquitous that its stars, hawking everything from humor to sports to makeup, have the ability to attract millions of viewers and just as much cash.

After spending hours in front of her own computer screen, data journalist Alejandra Padilla wondered why she couldn’t bring her work to the popular video platform.

“At the end of [2017] I was consuming a lot of YouTube, a lot of vlogs and banal content. People showing their lives and things like that. That's where the idea came from. I wondered why, instead of telling you how I'm going to prepare my wedding (a recurring theme among YouTubers), could I not tell you what I discovered when I made a request for information?" Padilla, co-founder of Mexican digital media outlet and data journalism initiative Serendipia, told LatAm Journalism Review (LJR). 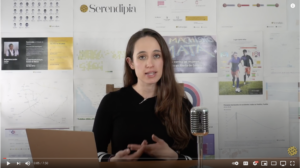 That’s when she and co-founder Hugo Osorio, an information designer, decided to create a YouTube channel to accompany the work Serendipia was already doing.

On Jan. 12, 2018, they published their first video on the platform promoting a new section of Serendipia, entitled peso for peso, in which they investigate how much events and initiatives of the federal government and local administrations cost in Mexico.

The following videos followed the same theme. For example, they explained how the Mexican federal government spent 3.8 million pesos (about U.S. $189,000) to organize the visit of the Canadian Prime Minister, Justin Trudeau, in October 2017, and also the money invested in guaranteeing the safety of Enrique Peña Nieto during his working tours to the interior of the country.

Now, the channel, Serendipia Data, has nearly 100,000 subscribers. It features videos ranging from how to file an information request to explanations about new laws or how to access government assistance programs.

Padilla hosts the videos, but rejects the label “YouTuber.”

“I don't consider myself a YouTuber. I am a journalist and I see YouTube as a tool that helps us reach more people, communicate in a different way and expand our audience,” she said.

Growth of the channel

In July of this year, Serendipia launched a social media campaign to increase its followers on YouTube.

“Join the nearly 100,000 people who know more about government programs, become familiar with open data, and learn to make requests for information. Subscribe to our YouTube channel and press the bell icon. Let's be 100,000 people who find stories in the data,” says the video that accompanies the campaign. 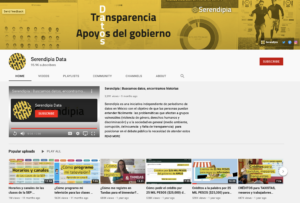 Serendipia's growth on this audiovisual content platform, both in numbers and style, has not been rapid. It has evolved over time. In the first videos, you can see how they only had a white background, the audio was not the best and they did not use “thumbnails” with illustrations that allow them to attract the public’s attention.

Now, the Serendipia team has grown to five people, which allows them to do more professional editing of the videos and produce more data journalism stories.

With Serendipia Data, they currently publish two videos a week exchanging information on data, transparency and support from the Mexican government. One day they can post a video explaining how to make a request for information and the next they talk about the effectiveness of COVID-19 vaccines or how the administration is ensuring public education during quarantine.

The channel also promotes the in-depth investigations that they publish once a month on their website. According to Padilla, planning and perseverance have been key to their growth.

“We are still a small channel. But, if you start to compare how we were in the first months, I remember that we even did a campaign on the networks to reach 100 subscribers and now we are going to reach 100,000,” she said.

The channel represents 10 percent of the financing sources for the media outlet – income that is supplemented by Google advertising and scholarships or grants they receive from various organizations that support independent journalism.

“What Serendipia is doing on YouTube is very interesting because it is not only a source of views, but also of financing. Part of its financing comes from the monetization of YouTube. It is something important that other media could consider because we see that there are topics that are of interest and information needs that are not necessarily the daily news, such as accessing government paperwork or something more relevant such as what is happening with COVID-19,” Juan Manuel Casanueva, director of organization Social Tic and member of the Serendipia Advisory Council, told LJR.

This Advisory Council was implemented by the digital outlet in mid-2020 to receive guidance on how to develop its business plan and review the structure and design of the website. Other members of the group are Aura Martínez from the Global Initiative for Fiscal Transparency, Eduard Martín-Borregón from the organization PODER, Anca Matioc from Agency and Pablo Collada, consultant in Philanthropy, Communication and Impact.

Casanueva also highlights that Serendipia has its own web analytics platform in order to precisely increase its understanding of its audience and subsequently capitalize on the commitment of its followers.

“Latin American media do not have a deep understanding of analytics, much less the smaller outlets. The fact that such a small, local media outlet is looking to capitalize on and understand its audience through data is quite valuable. You have to keep track of them,” Casanueva said.

Eduard Martín-Borregón, also a member of the Advisory Council, agrees.

“They are a media outlet that is reporting on Mexico from Puebla and that is very interesting. At the beginning of the pandemic Serendipia did very well. They opened data on COVID-19 and they have managed to interest and get new readers,” Martín-Borregón told LJR.

YouTube is not the only video platform Serendipia uses – they also have a TikTok account that has more than 65,000 followers. The videos are not merely the same that are posted to YouTube, rather they’re adapted to the social network. They follow trends and try to publish one a day. 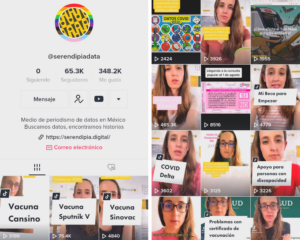 Although the monetization in TikTok is not considerable, this network allows them to send traffic to their website. An example was with the investigation into the environmental impact of the Mayan Train, a megaproject of the government of President Andrés Manuel López Obrador for the transport of passengers and cargo through the Yucatan Peninsula as part of the expansion of the national network railway.

As a result of this investigation, they had many comments and interactions on TikTok, both negative and positive, which resulted in views.

“The truth is that we also very much refused to enter TikTok because we thought they were just dances. But, we have found a way not to dance and to present the information in a more friendly and fun way,” Padilla explained.

However, the Serendipia team is concerned about the aggressiveness and attacks they have received on this social network compared to the others. Especially when they publish information on violations by the López Obrador administration. In some cases they have even received threats to their physical integrity that have been reported to the platform.

Mexico is the fifth country with the most TikTok users in the world with an average of 19.7 million people. It is surpassed only by India, the United States, Turkey and Russia.

Balance between journalism and social networks

Serendipia has identified a great lack of knowledge in Mexican society about data journalism and transparency. This is despite the fact that Mexico has had a Federal Law of Transparency and Access to Public Information since 2002, one of the first in the region.

With their videos, they seek to inform about the right of access to public information and teach about the importance of open data. At the same time, they continue doing in-depth work on gender violence, the environment, corruption and human rights.

One of the highlights of Serendipia, according to Juan Manuel Casanueva, is that they have achieved a balance between making content for social networks and also in-depth journalism. It’s a situation that is not very common to see in Latin America.

Martín-Borregón adds that the content that Serendipia publishes on networks can resemble what is known as government solutions journalism, where answers to social problems are given.

“There is this idea that these issues are so serious that you have to be just that: you have to be very serious,” Padilla said. “It is thought that if you start making a TikTok with this type of data they lose legitimacy and it is a joke. I think you can find a balance and it just helps you reach more people, which in the end is the goal.”