*This article has been updated

"I also come here to ask you for support, your help and labor justice, because I even fear for my life,” journalist Lourdes Maldonado said, face to face, to Andrés Manuel López Obrador in March 2019, during one of the daily morning press conferences the President of Mexico holds at the National Palace, in Mexico City.

Less than three years later, the communicator was shot to death outside her home in the city of Tijuana. This was the third murder of a journalist in Mexico in the first weeks of 2022, the second in a few days in Tijuana, after the death of photojournalist Alfonso Margarito Martínez on Jan. 17. Days before, on Jan. 10, journalist José Luis Gamboa was murdered in the state of Veracruz. 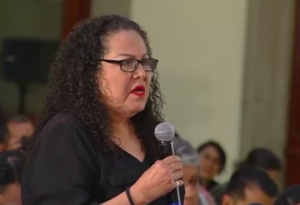 Lourdes Maldonado had personally requested protection from the President of Mexico in 2019. (Photo: Screenshot)

Maldonado had a career in journalism spanning more than four decades. She worked in large media outlets, such as Televisa and Radio Formula, as well as in local media outlets in her home state of Baja California. Before her death, she hosted the “Brebaje” [potion] local news show, which was broadcast Mondays, Tuesdays and Wednesdays at 1:00 p.m. on radio and streamed on the web.

A few hours before losing her life, Sunday afternoon on Jan. 23, Maldonado spoke by phone with Esau, a member of her production team, about her programming content for the following Monday. However, that broadcast never aired.

Maldonado's last news show, on Wed., Jan. 19, was a tribute to photojournalist Alfonso Margarito Martínez, assassinated two days earlier. Both journalists had collaborated at the Primer Sistema de Noticias (PSN) media chain, against which Maldonado had filed a labor lawsuit that lasted almost a decade. The journalist cried out for justice on her show for the death of her colleague.

A day later, Maldonado joined dozens of journalists, photographers and communicators from both sides of the US-Mexico border to hold a vigil in honor of Martínez in the Tijuana area known as Las Tijeras. Surrounded by images of the slain photojournalist, candles and flowers, the attendees said they would hold protests asking for justice. Maldonado even suggested the creation of a photography contest in memory of their colleague.

"She was an outstanding communicator. She was a hard-working, dedicated, passionate, visionary woman, with a unique voice in the media," Verónica Sánchez, director of Sintoniza sin Fronteras, the nonprofit that sponsored Maldonado in the production of her show, told LatAm Journalism Review (LJR). "Without a doubt, she was a warrior woman, always fighting for the rights of others, and I was passionate about that. That's why we joined forces and decided to work together." 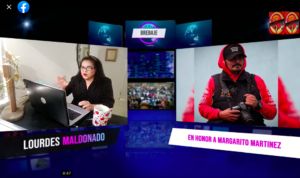 For six years, Maldonado worked at PSN, a media chain founded by the former governor of Baja California, Jaime Bonilla, who is affiliated with the political party of President López Obrador (Morena). The journalist herself had a labor battle for nine years against the television station for unfair dismissal and back-wages. On Jan. 19, Maldonado announced through a video that authorities had ruled in her favor.

In the video, her lawyer explained that, after PSN's refusal to abide by the ruling, the law would then move forward with an embargo, in which the journalist would be the trustee.

On the afternoon of Jan. 23, Maldonado was shot several times in the head while driving her car near her home. Her attacker fled aboard a taxi, according to the Baja California Prosecutor's Office. The journalist was registered with the Federal Government's Program for the Protection of Journalists and Human Rights Defenders.

When asked about the events the following morning, the President of Mexico asked not to jump to conclusions nor link the crime to the legal battle Maldonado faced against the former Governor.

“You cannot automatically link a labor lawsuit to a crime. It is not responsible to jump to conclusions. We have to wait (...) There will be no impunity,” López Obrador said.

Hours later, in an interview with Grupo Formula, former Governor Bonilla denied being involved with the murder, although he recognized the judicial victory in favor of Maldonado and assured that the resolution to that process was pending.

When Maldonado presented her case to President López Obrador in 2019, she said that she was asking for support because Bonilla "was a strong figure in politics," who did not intend to pay her.

When she announced the embargo on PSN, Maldonado told her lawyer that she would speak out against the alleged labor abuse the company exerted on its employees, which she also suffered.

"[PSN] never paid social security, never paid Infonavit [housing fund] and never paid Afore [retirement fund]," the journalist said in a video posted on social networks. “There is no payroll for employees because they are paid in a small envelope. I know, and I am certain, that they do not pay anything.”

“Without a doubt, today we champion this fight, that she was fighting for justice to be done, because it was fair for all journalists. It is a feeling of impotence, because at the end of the day, we see a system that undoubtedly has many holes and is not fair,” added Sánchez, who collaborated for a little over a year with Maldonado. 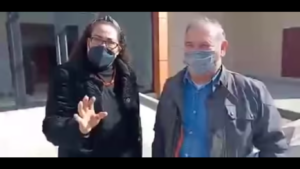 Labor authorities ruled in favor of the journalist in a lawsuit against a television station. (Photo: Screenshot)

The PSN network said it regretted the deaths of both Maldonado and Martínez and joined the cries for justice for the crimes against both journalists.

"We demand justice and clarification of her death, which is added to that of another of our colleagues, since Margarito Martínez was also our collaborator," Juan Arturo Salinas, general director of the company, told LJR. “It is unfortunate that a colleague lost her life in these circumstances. Our profession, which has been repeatedly hurt, mourns her death.”

On Tuesday, Jan. 25, journalists and citizens in at least 27 of Mexico's 32 states held vigils and demonstrations over the murders of journalists in recent weeks. Journalists and activists called for a day of national mobilization to show indignation over the increase in violence against the press in the country.

With hashtags such as #NoSeMataLaVerdad (truth can't be killed), #PeriodismoEnRiesgo (journalism at risk) and #NiSilencioNiOlvido (Neither silence nor forgetfulness), the protest also reached social media.

Lourdes Maldonado is the third communicator to lose her life violently in less than a month in Mexico. This has set off alerts from national and international organizations that defend freedom of expression, such as Reporters Without Borders (RSF) and the Sociedad Interamericana de Prensa (IAPA). Each published a statement condemning the serious uptick in violence against journalists in such a short time and demanding justice.

On Jan. 17, the photojournalist specializing in police affairs, Alfonso Margarito Martínez, was also assassinated in Tijuana. Martínez, who worked for the Zeta Weekly, was shot twice while leaving his house to report on a story. Only a month earlier, the journalist had requested protection from the Baja California government, but his request was not processed due to a change in local administration. He also asked to be added to the federal Protection Program, but that did not happen, according to the RSF statement.

“Alfonso had always had problems with the police because of the issues he covered. In 2019, police officers tried to confiscate his equipment. He suffered several similar incidents,” journalist Adela Navarro, director of the Zeta Weekly, told RSF.

A week earlier, on Jan. 10, independent journalist José Luis Gamboa was found dead near his home, in the state of Veracruz, with signs he was stabbed. Gamboa was director of the digital media Inforegio-Netword and the weekly newspaper El Regional del Norte. Days before, the journalist had published criticism for the rise in murders and for the alleged protection of criminal groups by the authorities of the Port of Veracruz.

The State Commission for the Attention and Protection of Journalists (CEAPP) of Veracruz said that Gamboa had no history of attacks or threats, and that he was not under any protection program.

Just a few hours after the demonstrations over the violence against journalists, an armed group chased and shot indigenous journalist José Ignacio Santiago Martínez on the Yosonicaje - Tlaxiaco highway, in the Mixteca region of Oaxaca, the Secretary of Public Security of that state reported.

According to the official report, on the morning of Jan. 26, some individuals attacked Santiago from a moving taxi. The journalist, who is under the protection mechanism for journalist and was traveling with bodyguards, was unharmed.

Mexico ranks 143 out of 180 in RSF's 2021 World Press Freedom Index. The organization recorded seven murders of journalists in that country last year. The Committee to Protect Journalists (CPJ), on the other hand, ranked Mexico as the most dangerous country in which to practice journalism in Latin America in its 2021 census. 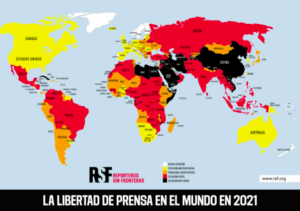 “2022 has opened with a bloodbath for Mexican journalism. These murders, committed just a week apart, herald another bloody year for press freedom in the country. However, this violence that targets journalists and the impunity that usually follows it should not be considered a mere misfortune. The federal authorities and the police in Veracruz and Baja California must do everything in their power to identify and arrest the perpetrators of these cowardly executions. The protection mechanisms must also be reinforced,” the director of the RSF Office in Latin America, Emmanuel Colombié, said in a statement.

The IAPA also condemned the murders and expressed solidarity with the relatives of the Mexican journalists.

"Each murder of a colleague reflects the seriousness of the violence against journalists in the country," Jorge Canahuati, president of the IAPA's Committee on Freedom of the Press and Information, said in a statement.

The IAPA reiterated its criticism of the ineffectiveness of the Mexican Ministry of the Interior's protection mechanism for journalists, especially in the case of Maldonado, who had publicly expressed that she feared for her life.

* This article was updated with information about the protests on Tuesday, Jan 25 and the attack against journalist José Ignacio Santiago in Oaxaca.