On the afternoon of Thur., Feb. 10, several men shot dead journalist Heber López Vásquez in the city of Salina Cruz, in the state of Oaxaca. López Vásquez, founder and director of the digital news outlets NoticiasWeb and RCP Noticias, became the fifth journalist killed in Mexico in less than six weeks.

His assailants fled, although the municipal police caught up with them and arrested them a short time later. The Oaxaca Prosecutor's Office said it has not ruled out that the crime was due to López Vásquez's profession, according to a statement from the Committee to Protect Journalists (CPJ).

In the midst of this scenario of violence against the press, the next day President Andrés Manuel López Obrador yet again used his morning conference to intimidate a journalist. The President released figures on the alleged income of journalist Carlos Loret de Mola, who in January broadcast on his program on the digital platform Latinus the investigation "This is how AMLO's Eldest Son Lives in Houston," produced by the organization Mexicanos Contra la Corruption and Impunity (MCCI or Mexicans against corruption and impunity). 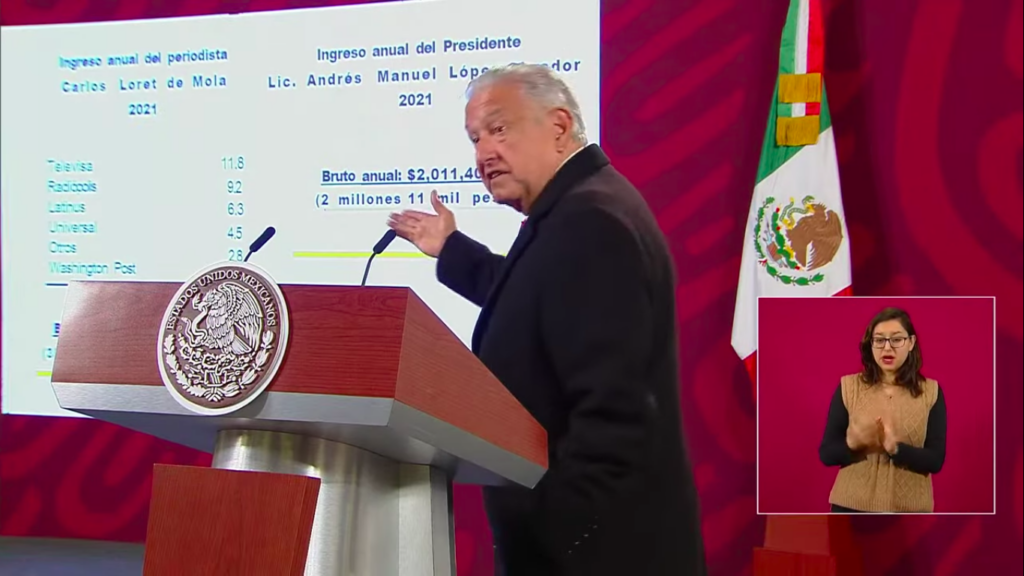 The President did not reveal the source of the information on Loret de Mola's income. (Photo: Screenshot of streaming on Facebook)

López Obrador showed a graph, whose source he did not reveal, that broke down the alleged income of 35 million Mexican pesos per year (about 1.75 million U.S. dollars) for the journalist's work in different media, such as Televisa, Televisa Radio and Latinus, as well as from the newspapers El Universal and The Washington Post, despite the fact that, in Mexico, revealing personal and fiscal data constitutes several crimes.

The reaction by the public and social organizations to the president’s actions was unprecedented: more than 64,000 people joined a Twitter Space organized by the Sociedad Civil México [Civil Society Mexico] association in which journalists, defenders of freedom of expression and members of civil society discussed the attacks on Loret de Mola and the uptick in violence that journalists have suffered in Mexico in recent weeks.

Twitter Space — a social media feature for live audio conversations — lasted nearly 10 hours and as of Monday, Feb. 14, had surpassed 1.5 million listeners. According to the organizers, it became the busiest Space in the history of that platform.

“In a brutally polarized Mexico, society found a common denominator of understanding on Friday: the president abused and violated the law, this is serious and should not happen again. Even many voices affiliated to the regime agreed on this,” Loret de Mola wrote in his column for The Washington Post on February 14. “Seeing a president using the instruments of the State to intimidate a journalist — in my case, with the visibility that having worked for years in high-impact national media has given me — made us think about the vulnerability of those who do not have those platforms, that visibility to defend oneself against the daily attacks that come from a president [...], a governor, a mayor or a police chief.”.

“The Loret Mola case is an example of the vindictive stance of the president, who used confidential tax information to attack the journalist,” said Carlos Jornet, President of the IAPA Committee on Freedom of the Press and Information, in a Feb. 14 statement. “The escalation of personal attacks on media and journalists who question his administration and disseminate information is an invitation to perpetrate more violence and is contrary to the tolerance that should prevail in a democracy.” 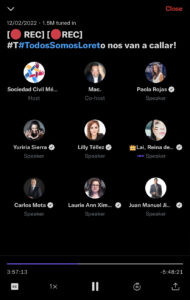 “It is not a matter of public interest to know the income received by private individuals, such as journalists. In this case, the President has not pointed out the possible existence of illicit acts or links to public officials that would justify the exposure of the journalist's tax information, which translates into an act of intimidation against a journalist critical of the government," according to a statement released by the organization over the weekend.

For its part, the Mexican Bar Association issued a position demanding that the president reveal the source of the information on Loret de Mola's alleged income, since having disclosed it constitutes a violation of Article 16 of the Mexican Constitution, which guarantees the human right to the protection of personal data, as well as article 69 of the country's Tax Code.

"Article 69 of the Federal Tax Code establishes tax secrecy, which protects taxpayer information obtained by the authorities in the exercise of their powers," the organization said. "Sensitive information, regardless of its source, regarding any citizen should not be revealed and even less disseminated by the Head of the Federal Executive, since the integrity, security and privacy of the person is endangered and is against the rule of law."

Through a video posted on his social media on Friday, a few hours after López Obrador's press conference, Loret de Mola denied the accuracy of the figures presented and said that the president had put him at risk by disclosing sensitive information.

"The president said that Televisa paid me millions of pesos last year, when I have not worked for Televisa since 2019. But even if the data are wrong, many people believe what the president says, and what he has done today is to put my family and me at the mercy of crime," Loret said.

Latinus, W Radio and The Washington Post, media for which Loret de Mola contributes, published respective statements in which they condemned the president's actions and expressed their alarm at the escalation of his attacks.

And AMLO responds with more attacks

Despite the multiple condemnations of the disclosure of Carlos Loret de Mola's private data over the weekend, President López Obrador repeated the intimidation against the journalist during his morning press conference on Monday, Feb. 14, and once again showed the graph with the alleged income figures the journalist makes.

“And why does that man earn so much? Because he is paid by the 'power mafia' to attack me, to weaken us and to bring back the same old corrupt regime," the president said. 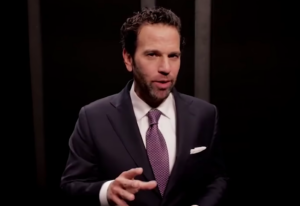 Carlos Loret de Mola said the information revealed by the President puts him at the mercy of crime. (Photo: Video screenshot on Twitter)

“How can we not make public this information when this man seeks only to strike, not only at the government, not only at the president, but at the transformation project that millions of Mexicans are carrying out to put an end to Mexico’s main problem: corruption,” he added a short time later.

López Obrador announced that he will ask the National Institute of Transparency, Access to Information and Protection of Personal Data (INAI) to investigate Loret de Mola’s income for the sake of transparency, despite the fact that said institute only deals with public officials' data. However, the President argued that the media are entities of public interest because the State grants them licensing.

On Friday, Feb. 11, the INAI called on public servants to act in accordance with the General Law for the Protection of Personal Data and said it remained attentive to the possibility of Loret de Mola filing a complaint regarding the disclosure of his private information.

“After data related to the alleged income received by a natural person for his journalistic work was revealed today, the National Institute of Transparency, Access to Information and Protection of Personal Data (INAI) remains attentive to the complaint he may file,” the agency said.