More Latin American newsrooms are incorporating a gender perspective, but diversity conference speakers say there is more work to be done

"The world is told through the eyes of man and that will never be objective," said journalist Lucia Solis Reymer, in a panel on gender at the First Latin American Conference on Diversity in Journalism, held completely online from March 26 to 27, 2021.

The pioneering conference is organized by the Knight Center for Journalism in the Americas at the University of Texas at Austin and is sponsored by Google News Initiative.

Solis is a gender editor for newspaper La República, one of the largest and most traditional in Peru. She and the other speakers discussed the barriers to the implementation of a gender perspective in newsrooms, as well as other topics. One of these difficulties, according to Solis, is the resistance of journalists, who argue in defense of a supposed objectivity.

“Another challenge would be the traditional treatment that there has been in journalism, I am talking about objectivity, which many times is nothing more than male subjectivity,” she said, reinforcing that she is not neutral, because she takes a clear stance in defense of the dignity and equality of women. 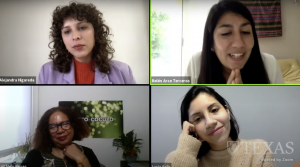 The panel was moderated by the editorial director of Chicas Poderosas, Belen Arce Terceros of Argentina, and featured Solis, as well as Alejandra Higareda, founder of the Mexican media outlet Malvestida.com, and Luz Mely Reyes, co-founder and general director of the Venezuelan media outlet Efecto Cocuyo, as panelists.

Solis also spoke about the daily life of a gender editor, a position that is increasingly common in newsrooms. She explained that her work is not just about gender-related topics, but that it spans the entire coverage of the newspaper, such as sports, celebrities and politics.

“Many people think that the gender editor is a kind of censor, executioner, but it is not like that. The gender editor of a media outlet is the figure that embodies, let's say, the strategy of the media outlet to apply the gender approach to its journalistic production. [...] It is very pedagogical. There is a lot of questioning, self-questioning, and a lot of discovery,” she said.

Belen Arce Terceros, from Chicas Poderosas, said that there have been many advances in the gender perspective in newsrooms in recent years, but much remains to be done. She cited, as an example, that about ten years ago it would be acceptable to call feminicide a crime of passion, something that is now rare.

“We continue to see news that perpetuates sexist stereotypes and violence against women, and we also know that in those stories that we tell, women continue to be underrepresented, only 24% of the people who appear in, are heard from or are featured in the news are women, according to a study from Who Makes the News,” she said.

She also pointed out that, in Bolivia, as in other countries in the region, only two out of ten opinion columns are written by women.

Venezuelan Luz Mely Reyes, from Efecto Cocuyo, said this lack of representation makes people, even today, surprised by the fact that she, a Black woman, has founded and direct a media outlet.

In Efecto Cocuyo, Reyes said, there is a concern to seek more women to be opinion columnists. According to the journalist, the problem is not just the lack of space for women to express their opinions: many need to overcome an inhibition to be able to occupy this space, when it exists.

"How can we make it so that many experts who have many things to say can do it? Many have discovered that they are afraid to express themselves, they think they do not know how to write, and they are geniuses, but they have not discovered it, yet. Not only do we have [women who write] opinion, we also look for experts. Part of our editorial line is that our articles, when we look for expert voices, often include women,” she explained.

Reyes argued that, in addition to the gender issue, it is necessary to be aware of racial, territorial and social class diversity. At this point, she explained the importance of identifying your own prejudices.

Like Reyes, Mexican journalist Alejandra Higareda, founder of Malvestida.com, agreed that having women in the newsroom is not enough to have a gender perspective. She said that she recently found a story full of prejudiced clichés, which had been done by a woman and edited by a woman.

This also happened with the women's magazines that Higareda read in her childhood and adolescence. “I grew up consuming magazines that showed me a practically one-dimensional woman, white, blonde, slim, and where the topics that were addressed always had to do with the body, how to be thinner, have smoother skin, longer hair and how to seduce your man, how to please your boyfriend,” she said.

When she started to work as a journalist, at similar outlets, aimed at the female audience, she felt that there was an "abyss of representation.” “I realize that I begin to replicate those messages when my editor tells me: hey, there was that event, make a list of the best and worst dressed. I began to have an internal conflict where I felt a disconnect between the content that I was creating and what was actually happening to me, what I was interested in, what I was talking about with my friends.”

That was the motivation to create Malvestida. At the outlet, Higareda said that they seek to amplify the voice of "a new generation that does not wait seated" and creates its own representation. “Many times the phrase 'give a voice' to someone is used, but you do not have to give a voice to anyone, that is, people already have a voice, what you can do is give a megaphone so that that voice reaches more people. At Malvestida, we like to think that this is what we do.”

The First Latin American Conference on Diversity in Journalism continues tomorrow, March 27, in Spanish and online. Registration is free and those who attend at least the four main thematic sessions will be able to receive a free certificate of participation.