“In less than 72 hours, we lost nearly 80 percent of our advertisers. Most of them relied heavily on tourism, and with the borders closed and a pandemic that was barely starting, all of us struggled to make ends meet,” Gabriela Brenes, executive director of Costa Rican newspaper La Voz de Guanacaste, told LatAm Journalism Review (LJR).

The newspaper, which publishes in English and Spanish, cancelled its print edition and went online only. It also closed its physical offices.

“This opened new opportunities for a radical digital transformation, a process we’re still undergoing,” said Brenes, who joined the publication’s team of six right at the beginning of the pandemic.

Like La Voz de Guanacaste, smaller print newspapers across Latin America have had to adapt to changes brought on by the pandemic, which accelerated transitions to digital and forced the publications to find new revenue streams.

Many were impacted by loss of advertising and government regulations that meant physical circulation of the product was not possible.

For example, print newspaper advertising in Latin America was estimated to fall 21 percent from 2019 to 2020, according to the PwC Global Entertainment and Media Outlook: 2021-2025. 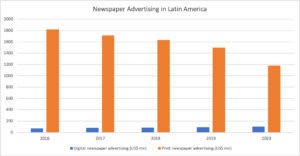 The effects of the pandemic were that many newspapers had to cut circulation, go completely online, cut staff and salaries, or get rid of office space.

Overall, the circulation of print media in Latin America was forecast to suffer a 16.3 percent drop in 2020, according to PwC, as published by Statista.

LJR spoke with three smaller newspapers in the region about the impact of COVID-19 and how they are recovering, despite the fact that this global pandemic has not shown any signs of slowing down.

Before the pandemic, La Voz de Guanacaste published about 48,000 copies per year of a free bilingual monthly newspaper with print and distribution costs of nearly $24,000 per year. Fifteen to 18 percent of its revenue came from advertising, derived mostly from print. 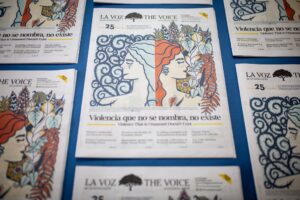 Then the pandemic hit the area, which was heavily reliant on tourism.

“They called that season a zero season, because it was zero tourism, zero work, zero income,” Brenes said. “For us, it was kind of like that, too.”

The team was tasked with figuring out how to make money from the digital edition. So, it started experimenting with a membership program, thanks to a small grant from the International Center for Journalists (ICFJ), and launched a premium product.

“We wanted to test the hypothesis: What kind of news products would have the highest conversion rates for a membership program knowing that our business is not necessarily in volume, because we’re a small news organization serving smaller communities, but in the quality of those interactions?” Brenes said.

The most popular membership level so far gets the reader access to premium newsletter Nosara, which has a high conversion rate, according to Brenes. La Voz de Guanacaste hopes to replicate this experience and model with Nosara to other communities and newsletters.

The team started also doing sponsored stories and offering digital advertising in new spaces, like podcasts or augmented reality. Of course, this all meant establishing ethical codes for advertising.

Now, Brenes said the publication is still largely depending on grants and philanthropy for revenue, but is seeing a slow rise in digital advertising.

They are also among the 21 Latin American media projects recently selected to participate in the Google News Initiative (GNI) Innovation Challenge.  They won with a proposal for the project GuanaData, which combines investigative and data-driven journalism to uncover corruption in local government and train citizens to access public information, as Brenes explained.

Brenes said the grant will help with an array of activities, including using machine learning and business intelligence to reduce operating costs and streamline the creation of news products. They’ll also contribute to advancing product culture in Latin America.

“We are seeing a lot of need in terms of having conversations about product and how to navigate this digital transformation,” Brenes said. “We really want to invite other people in the community and in Latin American newsrooms to join us in this GNI experience so we can finally hopefully have some basis as to what helps and what doesn’t help for our region.”

At the beginning of the pandemic, Tarapoto regional newspaper Voces, located in the province of San Martín, Peru, had to pause the circulation of its print edition due to the drop in advertisers because of the paralysis of the economy and because the purchase of supplies became difficult.

Voces did not want to lose the advertising contracts that were still in force, so it had to refocus its advertising strategy on digital.

The media outlet continued to put together its print version, but to distribute it in PDF format over the internet, in addition to using the newspaper's social networks to publish advertising and thus comply with advertisers.

"I kept making advertisements, efforts with the website, and I already had clients with whom I spoke and I began to blast their articles, their advertising through the networks," Rosali Quevedo, current manager of Voces, told LJR. “It was boosting that part that was a bit skinny. We didn't pay much attention to it and at that moment it did become a tool that we had to use.”

However, the newspaper was also struggling with another setback.

The founder of the newspaper and Rosali Quevedo’s father, journalist Julio Quevedo Chávez, died at the beginning of the pandemic, which forced his daughter to take the reins of the publication. The newspaper had to reconstitute itself as a new company. As a recently created organization, it was not eligible for the Reactiva Peru program, which provided interest-free loans to companies. 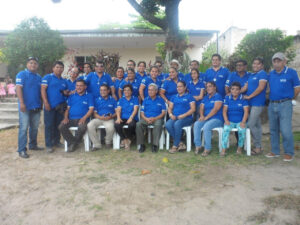 The team at Voces newspaper. (Courtesy)

To prevent the 15-year-old newspaper from going under, the younger Quevedo made a big bet: to respond to a bid to get Voces to be the “judicial newspaper” of San Martín. That is, to become the print outlet in which authorities publish judicial notices, municipal ordinances, mayoral decrees and municipal agreements, which occurs each year through a bidding process.

In April 2021, Voces won the bid. This appointment has allowed the media outlet to begin to recover from the deep difficulties it experienced in 2020.

"If we had not had this, perhaps we would continue to have a bad time, because right now with this we are getting back to level, little by little to get out of debt," Quevedo said.

In order to aspire to become the "judicial newspaper" of San Martín, Voces had to return to print circulation. The executives knew that this appointment meant a considerable possibility for income, so they decided to bet everything, go into debt and reprint the newspaper.

“I gambled because I knew that this [the bid] was coming and in order to prepare the way it shouldn’t stop circulating. And I was certain that this could be done,” Quevedo said.

To avoid laying off employees in 2020, Quevedo relied on her profession as a graphic designer to generate extra income, both personal and for daily expenses. Currently, the newsroom is maintained with seven permanent members and around six reporters distributed in the different districts of San Martín.

Daily print circulation is currently 4,000 issues, down 1,000 from before the pandemic but with a stronger presence on the internet.

Voces continues to work on reinforcing its digital strategy while its appointment as a “judicial newspaper” remains in force so that, if it does not win it again in 2022, it will have new strengths to help it move forward.

An opportunity for mentorship and subscription

For the newspaper La Opinion, from the city of Cúcuta, Colombia, the pandemic represented enormous difficulties as for many media in the world. But, it also meant the opportunity to carry out the necessary projects and adjustments to strengthen itself as a media outlet, which they had been putting off for years.

The COVID-19 crisis pushed the newspaper to accelerate the strengthening of its digital strategy, expand its advertising offerings and change the dynamics of its newsroom to be more focused on Internet content.

Between April and May 2020, the newspaper with 63 years of history had to stop circulating its print version due to the uncertainty from the pandemic, to protect its paper salespersons and street carriers and in part also due to a decrease of 39 percent of advertising revenue.

"That part was very difficult, but it was also a moment of reflection and of realizing how important our role was for the region, for the city and even for our own workers," María Catalina Colmenares, strategy consultant of La Opinión, told LJR. "With that we decided to go ahead and when things began to calm down, we decided to go back to printing, and go out with many security measures."

Fortunately, the newspaper was selected to participate in the support program for news media in Latin America affected by COVID-19 from Facebook and the International Center for Journalists (ICFJ), which awarded 44 selected media amounts between $10,000 and $40,000, in addition to introducing them to an accelerator program to help them strengthen their business models.

Thanks to this program, La Opinión was not only able to survive the pandemic, but was able to strengthen itself digitally under the mentorship of experts and adapt its dynamics and priorities with a view to diversifying its sources of income in the future. Currently, it has managed to return to circulation of 10,000 daily copies, which it had before the pandemic.

"That accelerator worked super well, it gave us a lot of gasoline and gave us a lot of information that was necessary," Colmenares said. “It really saved our lives. Thanks to the economic support and the appreciation of the dollar in Colombia, we were able to pay a part of Piano, which is the software that has allowed us to launch our digital subscription structure.”

Among the changes that La Opinión made to reinforce its digital presence is the foray into data journalism, visualizations and new formats for its stories. They also trained their journalists to think about their content with a much more digital approach from the start. Likewise, they reorganized the configuration of their newsroom, in which the division between the print and web teams was very marked previously.

“What we do now is a much more circular operation: everyone produces for everyone. Journalists produce the news and they decide themselves how they want to see it in print and how they are going to enrich it for digital, all from the same area,” Colmenares said.

In May of this year, they launched their subscription program, which consists of a partially porous paywall that includes up to 15 free articles before requesting registration. The newspaper now offers a section of "premium" content, exclusive to subscribers, as well as talks and events. The idea is to create a community that is close to its members.

“For us it is an investment, betting on the future of the business. The numbers are still in red but if we don't do this, they will be increasingly red," Colmenares said. “If we do this we have the illusion and the aspiration that eventually this will help us to get out of that red.”