Self-protection, solidarity within the profession and the strengthening of networks with civil society are some of the measures that members of the press in Latin America can take to try to protect themselves in the face of an environment of violence, stigmatization and harassment suffered by journalism in the region.

Paula Saucedo, from Article 19 Mexico and Central America; Emmanuel Colombié, from Reporters Without Borders (RSF); and Carlos Martínez de la Serna, from the Committee to Protect Journalists (CPJ), participated as speakers in the webinar to launch the free multilingual ebook "Protection of Journalists: Safety and Justice in Latin America and the Caribbean," published by the Knight Center for Journalism in the Americas and Unesco.

The discussion took place via Zoom on Aug. 2, 2022 and was moderated by Mexican journalist Javier Garza, editor of the ebook. The webinar also featured presentations by Rosental Alves, director of the Knight Center for Journalism in the Americas, and Teresa Mioli, the Center's program coordinator who served as the ebook's supervisor. 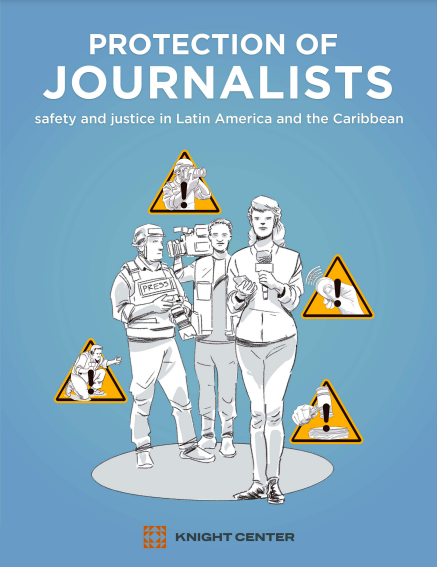 The ebook is available for free download in English, Spanish and Portuguese.

"Something that I have seen that has worked in Mexico and other Central American countries is that freelance journalists and journalists from different media outlets agree to monitor each other when they go out to do risky coverage," Saucedo, Protection and Defense Officer for Artículo 19, said during the webinar. "I think it is important to strengthen these mechanisms of self-protection, monitoring, public denunciations and seeking out international organizations."

As long as there are no comprehensive press protection policies on the part of authorities, the profession itself has to organize itself and establish internal security protocols, both physical and digital, within the newsrooms, said Colombié, RSF's regional director for Latin America.

This includes, he said, measuring the value of information. That is to say, to determine what risks a journalist is willing to take to obtain certain information, and whether he or she has sufficient protection tools available within their newsroom.

"It is important to insist on this, considering the increase in attacks against the press," Colombié said. "It is fundamental that, along with the development of public policies and the contribution of civil society, protection and self-protection protocols be established in newsrooms."

Colombié pointed out some of the structural flaws that afflict protection mechanisms for journalists in several Latin American countries, which are discussed in the ebook. Although the origin and execution of such systems differ from country to country, he pointed out that in general there is a lack of human and financial resources, as well as insufficient training of personnel in charge of freedom of the press protection.

For the most part, the mechanisms depend on ineffective institutions, such as police departments, the army or law enforcement agencies, said the representative of RSF, an organization that this year published the report "Protection Paradigm," on the deficiencies of the protection programs for journalists in Mexico, Colombia, Honduras and Brazil, considered among the most dangerous countries to practice journalism in the last decade.

"This has to do with political will. But there is a lack of sufficient resources considering the number of lawsuits and complaints that exist in those countries," Colombié said. "In risk analysis methodologies, which are fundamental to have an efficient mechanism, they do not always take into account the specificities of journalistic work. We think the protection measures are generally inadequate or applied too late."

In many cases, a lack of training and resources is compounded by a lack of coordination with other institutions and the scant transparency with which these mechanisms are managed.

According to Martínez de la Serna, CPJ's program director, it is essential that journalist protection mechanisms be open to the participation and scrutiny of civil society, but above all they should not depend on the political will of those in power.

"We cannot leave the protection of journalists to political will. This is a disaster. [Protection mechanisms] should reside in institutions, in an independent, solid and well-trained judiciary," he said. “In the end, it's about building democracy, solid and independent institutions that can guarantee freedom of the press.”

Martínez de la Serna said that when there is a lack of independence in judiciary institutions, it opens the door to cases of judicial harassment or criminalization of journalistic work, such as the recent case of Guatemalan journalist José Rubén Zamora, founder of elPeriódico, who was arrested on July 29 under accusations of money laundering and influence peddling.

Zamora's case was mentioned several times during the webinar as an emblematic case of judicial harassment of journalism in Latin America. The panelists and the director of the Knight Center for Journalism in the Americas, Rosental Alves, took the opportunity to express their solidarity with the journalist.

"What happened to José Rubén Zamora is a sign that democracy is at the very least a huge failure in the role of prosecutor's offices, the lack of independence, the lack of transparency, then these attacks can occur. If this happens, how can we expect them to protect journalists under other conditions?," Martínez de la Serna said.

Judicial harassment is one of the rising trends in terms of risks to journalism in the region that most concern the panelists. In Latin America and the Caribbean, more and more journalists and news outlets are being prosecuted for having denounced corruption issues that make political or economic powers uncomfortable. This inevitably results in censorship, the emergence of information deserts and issues that become untouchable.

"The judicialization of censorship has direct effects on journalistic work because in some way it prevents journalists from concentrating on the work of reporting because they have to defend themselves in front of judicial bodies," Colombié said. "It is a very strong and very worrying trend in almost all countries in the region."

In Mexico alone, the most insecure country for practicing journalism in the continent, an average of three lawsuits per month were registered against news outlets or journalists during 2021, according to Article 19. In addition, in that and other countries in the region, there have been attempts to revive old laws that prevented the full exercise of journalism, according to Saucedo.

"In several countries where certain laws had been repealed, we see that there are tendencies to reform local and federal laws to bring back laws that are restrictive to freedom of expression," she said. "This is quite worrisome and I believe that certain efforts should also be focused there to prevent judicial harassment from continuing to be perpetrated in the region." 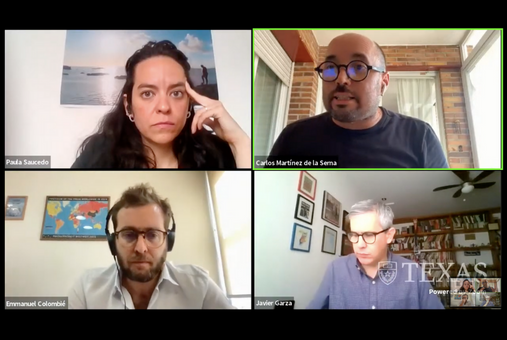 Representatives of Article 19, the Committee to Protect Journalists, and Reporters Without Borders participated in the presentation of the ebook.

For Martínez de la Serna, civil society and press freedom organizations must ensure that the political cost of using laws to stifle journalism is much higher, to the extent that politicians cannot afford to do so.

The CPJ representative said that, unlike regimes such as those in Cuba or Venezuela, which have structured systems to silence journalism and dismantle the independent press through laws, today politicians discredit and stigmatize journalists openly, directly and with impunity.

"In [the case against] José Rubén Zamora, the government of Guatemala has to know that in three days, since Friday, its international reputation has suffered an enormous deterioration for what has been a tremendous abuse of press freedom and the attack on a journalist," Martínez de la Serna said. "Impunity has a new section which is the political impunity of basing a politician's career on attacking the press."

The strategy of turning the messenger into the message through stigmatizing discourse against journalism has been very effective for governments in countries such as the United States, Mexico, Brazil and El Salvador, Saucedo believes, because public opinion focuses its attention on who the journalist or news outlet is rather than on the story or information of public interest they are trying to publicize.

"We have to generate these counter-narratives and keep pushing so the messages and investigations brought out by the press being censored every day in the region continue to be heard, because they get lost in a sea of stigmatizing discourse and polarization," Saucedo said. "The impact this has on the right and access to information in Latin American society is quite high."

In the opinion of Guilherme Canela, head of Unesco's Freedom of Expression and Safety of Journalists section, strategies to confront violence against the press must have different perspectives.

For this reason, the organization has carried out a series of initiatives in recent years, including the Global Media Defense Fund, which includes a component to finance research strategies on violence against journalists. This fund made possible the ebook "Protection of Journalists: Safety and Justice in Latin America and the Caribbean".

"It seems to me that this book is one more contribution to this discussion and it is important that it is really that, a process that will continue. Because without investigative journalism on this issue, we will not be able to reduce the levels of impunity that exist," Canela said at the beginning of the webinar.

The ebook is a compilation of 14 reports focused on four themes: coverage of protests, coverage of violent conflicts, development of protection mechanisms, and investigation and prosecution of violence against journalists. It is available in Spanish, English and Portuguese, and can be downloaded for free from the virtual library of JournalismCourses.org, the online education platform of the Knight Center for Journalism in the Americas.