*This article has been updated.

Nicaraguan newspaper La Prensa is under investigation and workers are prohibited from entering the building, located in Managua, after the national police raided it on Aug. 13.

The same day as the takeover, the National Police announced it initiated an investigation against Editorial la Prensa S.A. and its executives for alleged customs fraud and money, goods and assets laundering. It added that the facilities of La Prensa would remain under police custody. 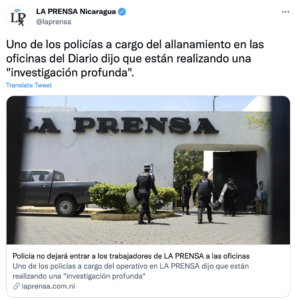 On Sunday, Aug. 15, a police chief outside La Prensa told reporters no workers would be able to enter the building on Monday and that an “extensive investigation” was taking place, the newspaper reported. The police official also said five workers had been summoned.

On Aug 16, the public prosecutor said a judicial detention of 90 days had been requested and issued for Holmann.

Additionally, the office said that during the raid on La Prensa, authorities found "30 boxes of documentation related with the 'Violeta Barrios de Chamorro' Foundation that is currently being investigated by the public prosecutor."

The foundation, which promoted press freedom and independent journalism in Nicaragua, is being investigated for alleged laundering of money, goods and assets, as well as allegedly having received resources from foreign sources to commit illicit acts, the prosecutor has reported.

Police took over La Prensa one day after the 95-year-old newspaper announced it would no longer publish a daily print edition due to lack of supplies that were being held in customs. Now, there are no daily print newspapers in Nicaragua.

After police raided the newspaper, the Inter-American Commission on Human Rights (IACHR) and the Office of the Special Rapporteur for Freedom of Expression noted via Twitter that the newspaper’s internal server was allegedly turned off and internet access allegedly cut during the raid. It also said workers were held incommunicado.

The IACHR and Special Rapporteur condemned “the constant official persecution of the press in Nicaragua and recalled that direct or indirect pressure aimed at silencing the work of the press affects democratic debate and is incompatible with the right to freedom of expression.”

The IACHR later condemned Hollman’s detention and made “a strong call for all arbitrarily detained persons to be released immediately.”

The Inter American Press Association (IAPA) spoke out against the “illegal raid” of the offices of La Prensa and Holmann’s detention.

It said Holmann is the 33rd political prisoner of the regime of President Daniel Ortega and Vice President Rosario Murillo.

“We have already fallen short of words to denounce the Ortega dictatorship, which every day shows how it takes opponents and critics out of the way,” said IAPA President Jorge Canahuati, according to an organization release.

Carlos Fernando Chamorro, director of digital media outlet Confidencial, whose headquarters was twice raided by police, wrote an Aug. 16 editorial remembering the resilience of La Prensa in the face of previous assaults.

“On January 10, 1978, the hitmen of the Somoza dictatorship assassinated my father Pedro Joaquín Chamorro, the director of La Prensa  who modernized national journalism and built the Republic of paper, but they were never able to kill his ideas,” he wrote.

The following year, the national guard destroyed La Prensa with planes and tanks, he recalled.

“Now, 42 years later, the fear of the new dictatorship of press freedom and free elections has led to the takeover of La Prensa, under another pretext, but with the same objective of trying to silence an independent media outlet,” Chamorro wrote.

As of Monday, Aug. 16, La Prensa is still reporting on its website and through social media.

*This article was updated to include that Holmann was ordered detained for 90 days and that the public prosecutor said it found material related to Violeta Barrios de Chamorro Foundation at La Prensa.