"Work in the media has developed for decades within a predominantly male chauvinist code," Yimmi Peralta, an executive of the Paraguayan Press Union, told LatAm Journalism Review (LJR), regarding the harassment of women journalists and female press workers in Paraguay and the unjustified firings when they denounce it.

Many of the women journalists and female workers voices are still hostage to the fear of speaking out, while press collectives and organizations working for freedom of expression and workers' rights are mobilizing for justice.

One of the victims and denouncer of the repeated situations of harassment in the Albavisión group, points out to a network of complicity among members of the media group’s top management. He did not want to give his name for fear of further reprisals. She regretted that the company was not present at a hearing before the Paraguayan Ministry of Labor on Aug. 5. "This clearly shows the company's lack of will to face and solve these situations," she said.

A group of around 20 women workers of Albavisión who have been organizing to write and present their complaints to put a stop to "a practice that has become normalized" in newsrooms, where "journalists, producers, editors, among other workers, have been exposed to situations of violence and harassment in a systematic way," Noelia Diaz, former secretary general of the Paraguayan Union of Journalists (SPP, by its Spanish acronym), said.

Santiago Ortiz, deputy secretary general of the SPP , told LatAm Journalism Review (LRJ) that "these incidents, in addition to violating the human and labor rights of these workers, cause a deterioration of democratic relations within society," as they have a direct impact "on the credibility of the media."

Ortiz has provided support to the victims during this dispute work, but has also offered active solidarity from the union, "since, in Paraguay, even if an individual is not a member of a union, the union adopts the denunciations that violate or attempt against the rights of the workers where the union has a presence, and such is the case of Albavisión," the union leader said.

Albavisión is a media conglomerate with presence in 14 countries in the region and is one of the three most important media groups in Paraguay, where it manages media such as Paravisión, the SNT channel, C9N, and the regional channel Sur TV.

LJR has attempted to obtain a comment from Albavisión, but has not received an official response. However, an executive who wishes to remain anonymous because he is not authorized to speak officially on behalf of the company was emphatic in pointing out that: "Under my watch, such a serious allegation will not go unpunished." 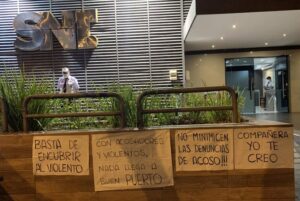 The newsroom as an epicenter of aggression

In the Union, we "have been working on creating a protocol for the submission and a pipeline of harassment complaints, since it is necessary to provide security for the victims when offering legal or union support," Peralta said.

Several press collectives have been denouncing the "negligence with which the complaints against the aggressors were treated," Perlata said. According to surveys carried out in light of these denunciations, the violation of the rights of women press workers has an unfortunate history that could easily be traced back to a decade ago.

On July 30, the Network of Women Journalistas and Communicators of Paraguay demanded "the immediate intervention of the Ministry of Labor, Employment and Social Security" and demanded "sanctions against this company that not only covers up harassers, but also punishes women who made the decision to denounce.”

At the same time, they expressed their solidarity "with the women colleagues dismissed from C9NParaguay, Paravisión Canal 5 and the National Television System of Paraguay, in clear retaliation to the denunciations made after numerous situations of sexual and labor harassment," said the Network  of Women Journalists through social media.

According to journalist Noelia Díaz Esquivel, they find themselves at odds because on the one hand "they ask us to denounce the violence to which we are subjected, but then they punish us for speaking out."

"The labor harassment situations in Canal 9 and C9, both channels belonging to the Albavisión group, have been going on for a long time, but the journalists and press workers never before dared to denounce it," Díaz Esquivel told LJR.

"On May 19, a group of four female workers decided to denounce what was happening in their workplace," Díaz Esquivel said. "From there, a process of support and preservation of their identities began in order to avoid stigmatization, given that when a woman denounces, women are singled out as the ones responsible."

The complaints were filed with the Ministry of Labor, which has a specific department for the protection of working women. A criminal complaint was also filed, which on paper is currently being investigated by the Public Prosecutor's Office.

Although Diaz Esquivel said that at the beginning they faced an information barrier to be able to broadcast what they were going through, local media such as the Paraguayan news outelt ABC exposed the issue with headlines such as "Increase in number of journalists victims of sexual harassment in two TV channels," while Última Hora headlined "Following allegations of sexual harassment of journalists, media group announces measures."

Overcoming the weakening of unionization would help to avoid harassment.

The Union of Journalists of Paraguay repudiated this type of practices and the impunity of the perpetrators, while making "a priority to streamline the complaints, so that these conflicts, which are often considered personal or private, have collective support for the protection and support of victims," Peralta said.

As a trigger for this problem, both the victims and the social and journalism organizations pointed out that "machismo is still predominant in Paraguayan society and the normalization of harassment remains a ghost that ends up never leaving in the context of press work," Peralta told LJR.

Precarization of labor as the norm

"The more precarious a woman's job is and the more necessary her employment, the more likely for these cases to occur. The ineffective responses by the State lead to impunity and the subsequent silencing of the victims," Peralta said.

Díaz Esquivel, former secretary general of the SPP, said that "none of these women had job stability. They had less than 10 years, which is what a worker has to reach to secure job stability."

This reality has uncovered crucial issues such as labor precariousness and the lack of elementary guarantees for a healthy development of the profession. Paraguayan labor legislation grants labor stability after completing 10 years in the same job. Before that point, a worker can be dismissed without grounds.

Although each country is free to establish its own labor regulations, there is a clear disparity regarding labor stability, since in Peru a worker is said to achieve such status after five years while in Uruguay it happens after 90 days.

The employees of the Albavisión Paraguay consortium told authorities of the Albavisión Group at its headquarters in Miami what they were experiencing, but "so far there has been no response from the directors to the request for a report "due to acts of violence in the workplace," which was requested by the Chamber of Senators of the National Congress."

The victims stand firm in their complaints, demanding that their claims be treated with dignity, that they be investigated and that justice be done, but also that mechanisms that guarantee the non-repetition of events such as those experienced by these workers be adjusted and updated.

"Our basic human right to an adequate and healthy workplace has been violated, but we have also experienced a lack of sensitivity to what happened to us," victims told LJR.