Ama Llulla, "don't lie" in Quechua, is the new Peruvian fact-checking network created to combat false information during the electoral campaign ahead of the April 11 general elections. 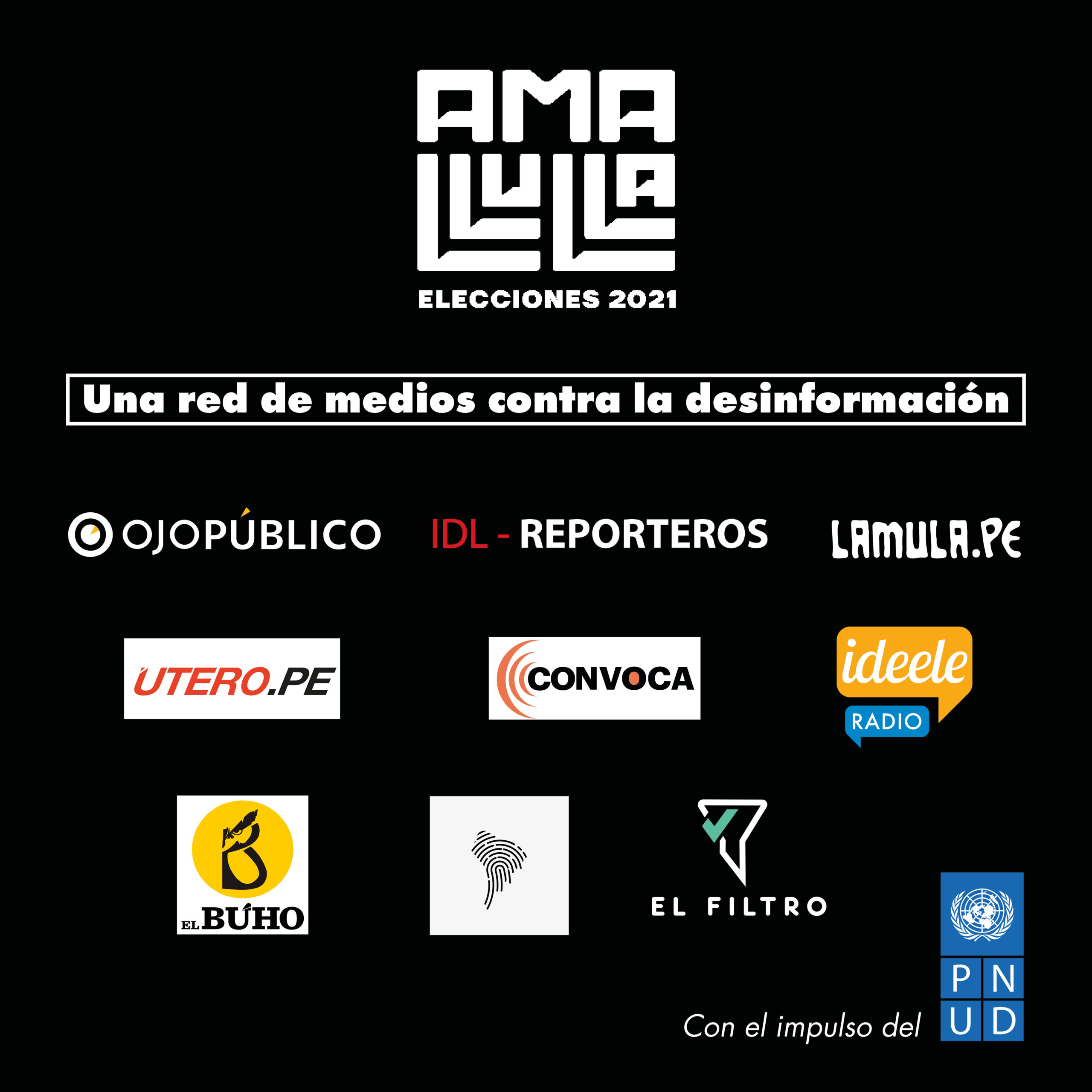 "One of the components of this network, and why it also made sense to call it Ama Llulla, is that we are going to translate the checks into Indigenous languages," David Hidalgo, journalistic director of Ojo Público, told LatAm Journalism Review (LJR). For now, the verifications will be translated into Quechua and Ashaninka, two of the most widespread Indigenous languages in Peru.

The network will place more effort into audio formats, such as podcasts, that can be replicated by radio stations in remote areas of the country, Hidalgo said. To reach the urban public, they will make more content in video format, with illustrations and digital pieces, he added.

This collaborative journalism initiative is made up of  Ojo Público, IDL-Reporteros, La Mula, Útero, Convoca, El Filtro, Sudaca, Ideele Radio, El Búho, as well as several regional media outlets that have joined to bring the checks throughout the country, especially to the most vulnerable populations, such as Indigenous peoples.

The experience of alliances against electoral disinformation, such as Verificado in Mexico (2018), Reverso in Argentina (2019) and Comprobado in Spain (2019,) served as the basis for the creation and coordination of Ama Llulla in just a few months, Hidalgo said. This collaborative and plural alliance was made possible thanks to the media call made by the United Nations Development Program (UNDP) in Peru.

Denise Ledgard, official in the area of democratic governance of the UNDP in Peru, told LJR that they considered the creation of this network "essential" during the electoral campaign, noting the "general disconnection" that exists between citizens, the political elite and public policy makers in the country.

Another of the UNDP's objectives in creating the network is to be able to close gaps in the political participation of certain groups that they consider vulnerable, such as women, Indigenous communities and youth, Ledgard said.

The Spanish Agency for International Development Cooperation (AECID, for its acronym in Spanish), together with UNDP, also supports the financing of the project framework under which the network was created.

After its launch on Jan. 17, Ama Llulla will begin with an awareness campaign on the harmful effects of disinformation. In that sense, they will produce content that highlights the risk of false information during the election season, Hidalgo said.

They will verify content spread on social networks and messaging applications, such as WhatsApp, one of the channels with the highest flow of disinformation.

In addition to the campaign, the network will also conduct training with virtual verification workshops. To do this, they will work with universities and educational centers to teach students a verification methodology that will serve as a tool to promote critical thinking in society, especially regarding the public discourse of authorities and other key actors.

To ensure that checks are done rigorously, objectively, neutrally and independently, the organization has created a virtual newsroom. This newsroom will be facilitated by Ojo Público, which will coordinate with the other participating media outlets.

The media outlets in the network will operate under a unique verification methodology, with principles such as ethical responsibility, transparency of sources and impartiality regarding the content about public figures that is checked. The verifications and materials that are disseminated, in accordance with the network's code of principles, will be current, relevant and impactful for the public interest and welfare.

The acute political crisis Peru has faced in recent years, La Mula's editor-in-chief Alberto Ñiquen told LJR, has shown that Congress does not represent the interests of those who elected its members.

"A better response to the pandemic –which will not be over soon– will also involve having the right people in the [Government] Palace and in Parliament," Ñiquen said. "Ama Llulla will show the false promises and assertions of candidates, which will benefit the electorate so that they know who not to vote for.”

La Mula and Útero, which belong to the same publishing house, will participate in the network with weekly checks.

"The elections are a transcendental political context to expose the lies and half-truths of the candidates," Milagros Salazar, director of Convoca, told LJR. "Journalism can help promote accountability in public opinion and that politicians take responsibility for what they say and promise."

Likewise, Ledgard pointed out that the network, in addition to verifying the political discourse of the candidates, will put important issues on the public agenda and create spaces where there can be virtual citizen interaction.