Peruvian journalist Paola Ugaz faces a new lawsuit for aggravated defamation, this time from the director of the Peruvian news site La Abeja. It’s the most recent incident of legal trouble for the journalist related to her investigative reporting – published in books, news articles and in documentary appearances – about the Sodalitium Christianae Vitae, a lay community linked to the Catholic Church in Peru.

At the same time, she has been targeted by other media outlets in the country, alleging she has committed illegal acts. Both press freedom groups and fellow journalists have come to her defense.

The first virtual court hearing for La Abeja’s defamation lawsuit against Ugaz took place on Sept. 21 before the Ninth Criminal Court of Lima. During this hearing, La Abeja director Luciano Revoredo presented a defamation case against Ugaz, asking for 200,000 nuevo soles (about US $56,000) in reparation and three years in prison for the journalist.

Carlos Rivera, Ugaz's lawyer, told LatAm Journalism Review (LJR) that at the hearing they proved “that Paola is the victim of a “demolition and attack campaign” that La Abeja has been developing since the end of 2018."We have presented as evidence 23 editorials from La Abeja against her, all very virulent and offensive."

La Abeja and other Peruvian publications such as the newspaper Expreso and Willax TV, have published several editorial and journalistic notes in recent months in which they link Ugaz with a case of money laundering, among other illegal acts.

Revoredo told LRJ that he sued Ugaz for having said in several Peruvian media interviews that his website is defamatory. (The website for Sodalitium Christianae Vitae? Would help to specify, if possible.)

“As a result of several publications that we did about the work that Paola Ugaz and Pedro Salinas had been doing and, above all, as a result of the fact that we covered the trial they had with the Archbishop of Piura, something has obviously bothered her and so she expressed herself that way, but she didn't tell the truth. That is why we ask for the rectification,” Revoredo said. The first notarized letter of the case was sent to Ugaz in July 2019, the site’s director said.

Since July 2019, the editorials La Abeja published about Ugaz are “Paola Ugaz's false testimony,” “Paola Ugaz: the tweeter of corruption,” “Paola Ugaz the face of defamation and lies,” “Half corrupt, half accessories,” “When attacking the church is a business,” among others.

Ugaz told LJR that "there are no coincidences here," because the attacks from La Abeja began after the lawsuit against her from the Archbishop of Piura José Antonio Eguren. "Before that I did not exist for La Abeja, until the trial began," Ugaz said.

For five years, Ugaz and fellow Peruvian journalist Pedro Salinas have covered the movements and actions of the lay community Sodalitium Christianae Vitae. In 2015, Salinas, with collaboration from Ugaz, published the book “Mitad monjes, mitad soldados” (Half monks, half soldiers), in which he denounced, through testimonies, the sexual abuse of minors allegedly committed within the Sodalitium by members of the ecclesiastical community. 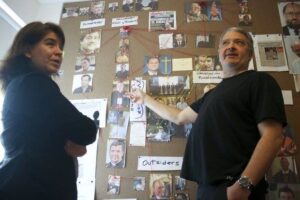 In addition to the repercussions that the book had in the years after its publication, in 2018 an Al Jazeera documentary was made, which revealed alleged land trafficking in Piura by the Sodalitium and its real estate company. Because of that documentary, and due to her collaboration in it, Ugaz was sued by the Archbishop of Piura for aggravated defamation. Months later, the bishop withdrew his lawsuit following fierce criticism from Church leaders and freedom of expression advocates.

Archbishop Eguren is part of the Sodalitium and, according to Ugaz, was part of the founding generation of that group in Peru more than 40 years ago.

Revoredo denied that the coverage of news about Ugaz in his columns was due to a personal link or one between La Abeja and the Sodalitium. His site is conservative, pro-life, pro-family, and covers politics and international current affairs, Revoredo said. "And, yes, there is a section dedicated to the subject of the Church," he added.

On Oct. 27, the judge who heard Revoredo’s case against Ugaz will decide whether or not to open a legal process against the journalist, Rivera said.

Currently, Ugaz has three open lawsuits. According to the journalist, two are from Carlos Gómez de la Torre, the former general manager of the real estate company Miraflores Peru that Ugaz says is linked to the Sodalitium. Gómez de la Torre filed the same defamation lawsuit against Ugaz in both Piura and Lima. The journalist's lawyer said that the Lima trial was won and has been appealed by Gómez de la Torre, but that there is still no judge's decision on the matter; the one in Piura is still pending.

"I also have four unsuccessful complaints before the Anti-Corruption Prosecutor's Office from Edgardo Palomino Martínez, [who accuses me] of belonging to the criminal organization of [former mayor] Susana Villarán."

“The use of criminal defamation suits to intimidate and silence Peruvian journalists like Paola Ugaz has gone on for far too long,” said Natalie Southwick, Central and South America program coordinator for the Committee to Protect Journalists (CPJ).

CPJ called on the Peruvian authorities to end the campaign of legal harassment against Ugaz. It also demanded that the Penal Code be modified so that defamation can no longer be used against investigative journalists and for Peru to comply with international regulations.

UK Ambassador to Peru Kate Harrisson said on Twitter that “press freedom must be respected and protected. Our solidarity with Paola Ugaz and Pedro Salinas.”

In the last two months, newspaper Expreso and Willax TV have published a series of editorial columns and journalistic notes that accuse Ugaz of money laundering when she worked for Lima's mayor’s office. Ugaz denied the money laundering accusations and said she did not know the people with whom these media outlets linked her in the alleged illicit acts. The journalist's lawyer said they have sent notarized letters to those media outlets requesting their rectification. However, they haven’t received a response, Rivera added.

In a recent column in Expreso, journalist Mariella Balbi scolded prosecutors for not opening a judicial process against Ugaz with the information that Expreso's investigations allegedly revealed. The newspaper published alleged chats between Ugaz and several other people with whom she allegedly coordinated irregular transactions of large sums of money.

“The media that are friends of the regime and of the accused [Ugaz] are silent, knowing that the complaint is real. But it is unacceptable for the prosecutor’s office to cover it up and silence it shamelessly. It is because of Ugaz's friendship with the prosecutor Pablo Sánchez,” Balbi concluded in her column.

When Balbi was consulted regarding the column she wrote about Ugaz, the journalist told LJR that as for Ugaz, in Peru, "nobody is persecuting or attacking her, least of all for her work on the Sodalitium, as she usually mentions." She clarified: I commented on that news [of the chats], I have not written about the lady you mention.”

In early September, the director of La Abeja published an editorial column on his website citing the information from Expreso against Ugaz.

On Oct. 15, the tabloid La Razón published the article "Los intocables" (The untouchables) in which it repeatedly quotes the newspaper Expreso and its articles on the alleged case of money laundering in which Ugaz and Salinas allegedly engaged. In the article, the tabloid also published the Lima addresses of the properties of Salinas, his children, Ugaz and a large piece of land she allegedly has on the outskirts of Lima. 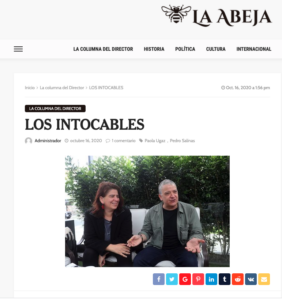 In the next few days, Rivera said, they will file a complaint against the newspaper Expreso that continues to accuse Ugaz of money laundering when she was head of communications of the Municipality of Lima in 2013 for then-Mayor of Lima Susana Villarán. The former mayor is in preventive detention due to being investigated in the Lava Jato case, for allegedly having received money from officials with the Brazilian construction company Odebrecht during her time in office.

The Peruvian blog Útero published that Villarán's alleged acts of corruption occurred after the period in which Ugaz worked in the municipality.

For a week, a letter of support for Ugaz has been circulating that has been signed by Nobel Laureate Mario Vargas Llosa and various political figures, academics, artists, and fellow Peruvian and foreign journalists. In it, they express their solidarity against the attacks on social networks and in digital and print media that have targeted Ugaz in recent months.

“Ugaz has an impeccable track record in the defense of human rights and in investigative journalism. Her work has exposed the sexual, physical and psychological abuses perpetrated by the religious organization Sodalitium Christianae Vitae (SVC, for its acronym in Spanish). Before the imminent publication of a second book on the finances of the religious organization that she has been investigating for 10 years; legal and media harassment against Paola Ugaz continues and continues to increase,” the letter states.

So far, this citizen initiative has collected 2,300 signatures of support and will circulate until Oct. 27, the date on which the second hearing of Revoredo's defamation lawsuit against Ugaz will take place.

Ugaz said she was threatened with death on Oct. 2 by a man on Instagram. The user said he was following her on Twitter and called her ugly and retrograde leftist. "They are going to die, reds, the Peruvian Charlie Hebdo is coming, we are going to spray them with lead," the threat read.

Peruvian media outlet IDL-Reporteros warned in a thread on Twitter that this threat must be investigated as preparation for a terrorist attack. "The attack on Charlie Hebdo was a bloody international terrorist action that provoked the horror of the world and solidarity with the victims," the site said.

The Press and Society Institute of Peru (IPYS) rejected the death threat and all attacks against Ugaz and demanded authorities thoroughly investigate the threat and punish those responsible.

"I don't go out alone anymore," Ugaz said. The journalist commented that they denounced the attack from Instagram to the Anti-kidnapping Division of the Criminal Investigation Directorate of the National Police (Dirincri).

After the recent article from La Razón with photographs and information on the homes of Ugaz and Salinas, the journalist expanded the complaint made a few days earlier, for now being the target of a terrorist act. The prosecution will decide in the next few days whether to open an investigation in this regard.

Ugaz reflected on the years she has devoted to her investigation on the Sodalitium: "I don't regret anything." “This 10-year investigation has led me to meet wonderful people, the survivors of the Sodalitium, who have made me and Pedro feel that the Pandora's box that was opened five years ago with ‘Half monks, half soldiers’ was worth it.”