"Turn off the TV!", "Go out to march!", "The TV lies!" These words were painted on posters and city walls in Santiago de Chile and other Chilean cities during the most massive social protests against social inequality in the country's history, also called “the awakening of Chile.” 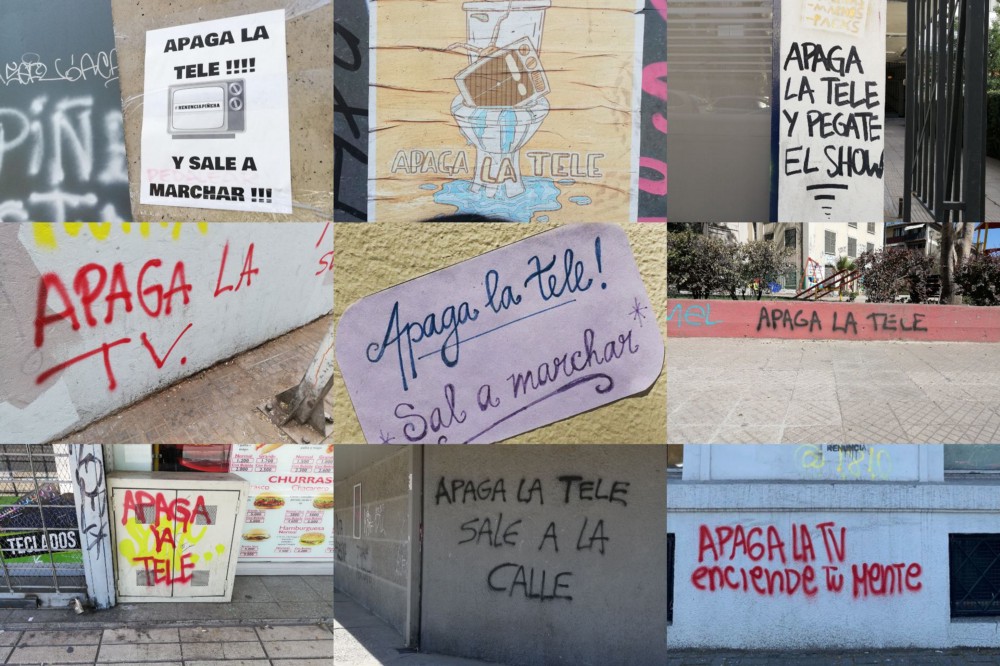 Collage of images against the press found on the streets of Chile during the social crisis (2019-2020). (Photo: Patricio Contreras)

When the social clashes of October 2019 occurred in Chile, due to growing economic and social inequality in the country, people went out to peacefully march en masse. The traditional media, however, showed violent protesters and skewed coverage of the demonstrations, thus undermining their already fragile credibility. Additionally, the environment was ripe for the spread of disinformation.

As a result, fact-checking outlets and alternative media outlets emerged to keep citizens informed about the reality on the ground. And there was a reflection within broadcast journalism as to how police abuse and repression should be covered, and the variety of sources that should be consulted.

The revolution will not be televised

“When the social movement began, the focus of television coverage was, in general, coverage of the violent events that occurred around the demonstrations, which were very massive and occurred every day. That created a lot of annoyance among viewers,” Chilean journalist and academic Francisca Skoknic told LatAm Journalism Review (LJR). "People ended up hating journalists at the marches and in many cases attacking them."

Traditional media in Chile –such as TVN, Mega, newspaper La Tercera, among others – emphasized coverage of the excesses with long and uninterrupted broadcasts of looting, barricades, fires in different parts of the city, mainly in the center of the capital, as Claudia Lagos, a journalism professor at the University of Chile and president of the Chilean Journalists Network, told LJR.

The website of TVN Noticias, of the channel Televisión Nacional de Chile, published in the first paragraph of a news item on Nov. 23, 2019: “Fires, attacks on police stations and a million-dollar robbery of a bank were recorded at the beginning of this end of week, on another night of violence with newly wounded and detained in the midst of the social crisis in Chile, as reported by police.”

Chilean newspaper La Tercera published on Oct. 28, 2019, ten days after the outbreak of protests, that government intelligence sources had detected the presence of Cuban and Venezuelan citizens in the violent acts of the protests. That same day, it retracted and apologized, saying that it was off-the-record information that the police had handed over to the government.

However, this was not new, Lagos said, since the media agenda that covers crimes and assaults has been central in television coverage in Chile for years. "Therefore, emphasizing these aspects on the coverage of social demands was consistent with that approach to television news in recent decades."

The press and a crisis of credibility in Chile

In a survey conducted by the Faculty of Communications of the Pontificia Universidad Católica de Chile, 80 percent surveyed felt that journalists did not cover important events or interview the correct sources. "Seventy-one percent said that they covered only part of the news, and 91 percent said that they did not agree with the statement that journalists were a contribution in the management of the social crisis," Chilean journalist and executive director of the Chilean Network of Journalists, Paulette Desormeaux, told LJR.

The consumer turned his gaze to Facebook, WhatsApp, Instagram, Twitter, networks used by independent media and journalists to inform and report from the field, Fabián Padilla, director and general editor of the site Fast Check CL, told LJR.

Traditional media turned a "blind eye" to the human rights problems that were occurring in the country since the protests began, Padilla said.

In its 2020 annual report on digital news, the Reuters Institute for the Study of Journalism noted that people's credibility in the Chilean media declined substantially in 2019, following massive social protests.

“In a country with the most concentrated media ownership in Latin America, journalists are seen as part of an unrepresentative political class and there is resentment on the streets about news coverage on TV and in the press,” the study said.

The site La Voz de los que Sobran (The Voice of those who Remain) recently published that officials of the government of President Sebastián Piñera, the president included, allegedly met with executives and editors of various traditional channels to coordinate the editorial line of coverage of the protests, and show the violence especially.

The lack of diversity in Chilean traditional media, Skoknic added, is a problem. "Their editorial lines are rather homogeneous, tending to the right, liberal right or conservative right, and therefore this type of phenomenon is seen from that perspective," she explained.a

CNN Chile and Chilevisión, among the TV channels, made an effort to provide balanced coverage of the events during the protests, according to Skoknic.

As a consequence of their efforts to cover the protests in a balanced way, a sponsor of both channels sent a letter to withdraw its advertisement due to its type of coverage, as published by El Universal de Chile.

"We warn the public that these undemocratic practices of those who would like journalistic information to be controlled by business or political interests, are inadmissible in the face of the just citizen demand that calls for for a democratic, pluralist press with editorial diversity," the Association of Journalists said, regarding these actions.

Regarding news sites, Lagos considered that Ciper, El Mostrador and Interferencia were among digital media with more balanced coverage of the protests. "Ciper and Interferencia, emphasized precisely what the traditional media, especially TV, omitted: police brutality, the backroom of the government's political handling of the crisis, etc.," she said.

Hyperlocal media also gained more relevance when social demonstrations began in the country. There was an increase in traffic for hyperlocal media such as La Voz de Maipú, according to Lagos, which focused on their communities to cover the crisis.

According to Poynter, disinformation spread through messaging services and social platforms was one of the most relevant consequences of the political crisis that was unleashed after the wave of protests.

The U.S. organization reported that in December 2019 there were up to 17 active data verification platforms in Chile. Among the fact-checking media are Malaespina, REI Chile, Fake News Report, Fast Check CL.

Fast Check CL, which started as an Instagram account on Oct. 22, 2019, currently has around 181,000 followers on that social network, a website, a staff of eight journalists, as well as collaborators, and its financing is based on donations. According to Padilla, its founder, the goal of the site is to help people read verified information in the face of the chaos of disinformation and the lack of credibility of the media.

"Since Oct. 18, 2019, the hoaxes, viral messages on WhatsApp misinforming about the military, about a possible coup, about the violation of human rights, about hundreds of things, caused a shock of disinformation," Padilla said. In this context, he explained, Fast Check CL was born to combat viral disinformation, taking as an example the experiences of Chequeado, from Argentina, Full Fact, among others.

Mala Espina is another fact-checking site that emerged during massive social protests to combat disinformation and document this social situation.

Journalist Tomás Martínez, editor and founder of Mala Espina, told LJR that the first four months only he worked on the checks, but that since April 2020, four journalists and one intern have joined the working group.

In addition to the protests, Mala Espina also verifies data on the coronavirus pandemic, thanks to which it has been part of the LatamChequea network of fact-checkers since April.

Another of the data verification initiatives that achieved thousands of followers was REI Chile. This new digital fact-checking outlet was created and is maintained by university students seeking to represent what was happening on the streets, Desormeaux explained.

REI Chile has more than 29,000 followers on Instagram and a team of 25 people.

“REI emerged on Oct. 20, 2019, two days after the start of the social protest. The initiative came from Kari López, who proposed in a WhatsApp group that we could meet as journalism students from the Pontificia Universidad Católica de Chile to report the events that were happening in Chile," Micaela Marchant, general editor of REI, told LJR.

REI emerged in response to a general feeling that traditional media were not showing what was really going on, Marchant said, and REI's idea was to get the information directly, being on the street, using its own images and strict editorial criteria.

Currently, the format and periodicity of the information have changed. “We decided to stop having minute-by-minute coverage from the street and start doing more in-depth journalism, with data and context,” Marchant said.

Reflecting on the role of the press

In the opinion of Chilean journalist Paula Molina, the social protests reminded the media of the importance of working on the ground, of deploying press teams with sufficient capacities to work in “such a volatile and dynamic context,” as in demonstrations, and to more quickly identify police abuse against citizens during protests.

“I think that what we could learn from the crisis is the need to strengthen the capacities of reporting, investigation, information checking, data analysis: redoubling the tools and commitment of journalism to seek the truth will be the best antidote against pressure and impartiality,” Molina told LJR.

Public opinion, according to Molina, even more so after the outbreak, demands that the media in Chile have a serious reflection on the basis of its credibility: “why should the public believe us?”

According to Desormeaux, Lagos and Skoknic, given the situation of the press that was attacked every time it was noticed at the demonstrations, many traditional media outlets began to include more voices in the weeks after the outbreak. Special programs were created that included experts in the morning programs –previously intended only for entertainment–, neighborhood leaders, citizen organizers, etc.

“This opened up a melting pot of new voices on television that had rarely been seen. I particularly remember TVN,” Lagos said.

The massive social protest marches in Chile continued for a year, until the government gave in to the main request of the population, a change in the Political Constitution for greater equality of rights. The popular vote for a new Constitution took place on Oct. 25, 2020 and obtained 78 percent approval.

One year after the social crisis, the project LaBot Documenta was born. This platform launched, according to its website, in the absence of a greater ecosystem of media and investigative journalists in Chile, and of the need to leave a more balanced record of human rights violations caused by police abuse and repression during the recent social crisis.

Skoknic, along with colleagues Andrea Insunza and Paula Molina, launched LaBot Documenta after the first anniversary of the social outbreak.

The platform has so far processed more than 1,500 court cases, which are presented as files with a brief description to generate a database. These files, the journalist said, are accompanied by journalistic investigations that analyze some patterns of attacks.

At the same time, the trio also created an open fact-checking site  LaBot Chequea. Both projects receive funding from the Open Society Foundations.

LaBot Chequea is a closed bot in the form of a chat, whose objective is to teach the user to check information.

"We believe that while it is very important that all these small fact-checking sites have emerged, the misinformation is always more powerful and goes faster," Skoknic said. "We believe that it is important that citizens have tools so that they themselves learn to check, doubt and be able to verify and not believe everything that comes to them on WhatsApp chains."