Transgender journalist Câe Vasconcelos works to amplify the voices of the trans community in Brazil— the country with the highest recorded number of trans people murdered in the world.

Between October 2020 and September 2021, 375 murders against trans people were recorded in the world; Brazil alone was responsible for 125 of these deaths.

Although the country’s younger generations have made progress toward social acceptance and equality for trans people, there is still a lot of conservatism in their society’s culture, Vasconcelos told LatAm Journalism Review (LJR). In 2019, Brazil’s Federal Supreme Court approved the criminalization of transphobia, but the law is not strictly enforced.

“Part of this hatred comes from our parliamentarians, especially from the federal government of Jair Bolsonaro,” Vasconcelos said. 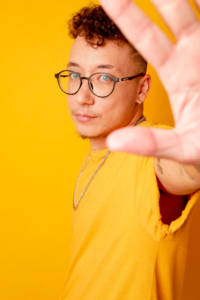 Vasconcelos, 30, is a native-Brazilian journalist and reporter who specializes in LGBTQ+ coverage. Since December 2019, Vasconcelos has openly identified as a trans man in his professional and personal life.

He has worked with several news outlets, including Ponte Jornalismo and ESPN. Although he has not faced any discrimination from his employers thus far, he said he still lives in constant fear in his everyday life.

As violence against journalists increases across Latin America, trans people are frequently being persecuted and murdered in Brazil.

Brazil has been leading in the largest number of murders against trans people for the last 13 years. According to the Pulitzer Center, at least 4,402 trans people have been murdered between January 2008 and September 2021.

Vasconcelos recognizes the danger of being a trans journalist in Brazil but said it was the urge to help the trans community that ultimately led to his pursuit of a career in journalism.

“It was the need to amplify the voices of the marginalized population, who come from where I came from, and who were never heard by the press in the right way. I am seeking to give visibility and defend human rights above all,” he said.

“When the press reports something it's always in the sense of death and violence, we rarely see positive stories about our struggles,” Vasconcelos said. “I am one of the few journalists who takes other topics; positive, of life and advances.”

The manifestations of transphobia

Most discriminative acts against trans people in Brazil are not physical acts of aggression but psychological microaggressions, Vasconcelos said. From having his name or pronouns disrespected to not being able to use a public restroom or having a medical appointment denied, he said these violent actions are “normal” in Brazil.

In Brazil, 1,276 crimes motivated by LGBTQ-phobia were recorded in 2019. 1,148 of these crimes were non-physical offenses, such as defamation, slander, or threats, and the remaining 237 were physical acts of aggression.

But one of Vasconcelos biggest fears— and a frequent occurrence that trans journalists and many other trans people face— is losing a job for being open about his identity.

“I have colleagues who have already lost their jobs for asking to use their social name on a badge,” he said. “One of my biggest fears was losing my job for being who I am, something very common here in Brazil.”

A social name in Brazil is adopted by individuals who feel the name better represents their identity.

The pressures of sex-work

Independent photojournalist Danielle Villasana, who is from the United States and based in Istanbul, has worked extensively in Latin America where she focused long-term on communities of trans women in the region.

Villasana says she does not speak for the trans community, but while photographing trans women in their communities, she has witnessed numerous instances of microaggressions and acts of violence from people who pass by her photoshoots. However, she said that most of trans women she had photographed have cited sex work as their only option, in terms of employment due to discrimination and transphobia.

Only 4% of the trans population in Brazil have formal jobs with the possibility of promotion and career progression, according to data recorded by Antra, Brazil’s National Association of Transgender Persons, in 2020. Additionally, 90% of the trans and queer population have prostitution as their main income.

Due to the vulnerability of working on the streets at night, sex work for trans women increases their exposure to violence and insecurity, Villasana said. The life expectancy for trans women is between 35-41 years old—roughly half of that of the general population of the world, according to Warner Media. Because many trans women are relegated to sex work, there’s limited options for upward mobility, she told LJR.

The root of the transphobia lies in the conservative, cisgender values that are integrated in Brazil’s and other Latin American countries’ governments, Donna DeCesare, a University of Texas at Austin associate professor and former journalist in Latin America, said. She has also witnessed firsthand the transphobic violence that exists in countries like Brazil.

“Many governments in Latin America are very repressive and backward,” DeCesare told LJR.

Bolsonaro is known to have made transphobic statements about trans people on live TV, during interviews and on his Twitter, both before his election as president and now that he is in office.

Bolsonaro’s ideology has influenced some of Brazil’s federal policies and actions. Bolsonaro is a reactionary figure and is consciously LGBTQ-phobic, James Green, a professor of Brazilian history at Brown University, said. He lived in Brazil for six years and has kept up to date with the country’s politics since 1973.

“The government, for example, has not funded films that deal with LGBTQ issues, including trans issues. The government also supported the closing of an art exhibit that included trans people,” Green told LJR.

Trans journalists like Vasconcelos must first overcome the prejudices of Brazilian society to attain a job in journalism. After successfully obtaining a career, the journalists can then use their platform to speak out against the same prejudices they faced.

In Vasconcelos’s five years of reporting, he said he has yet to discover any journalistic organizations specifically for trans people. Vasconcelos himself is working to create more support for trans journalists in Brazil and make topics relating to transgenderism more widespread in the news. He said he is planning to launch the first journalism agency made by only trans people in Brazil later this year.

“The idea is not only to cover the topics that are a part of our daily lives but also to protect other journalists, so they do not suffer transphobia in newsrooms,” Vasconcelos said.

The young journalist keeps his hopes high for the trans community and its future. Vasconcelos envisions a more accepting and equitable society in Brazil and works every day toward this goal.

“My dream, and that's what I'm working for, is that Brazil stops being the country that kills the most trans people,” he said.  “That we can see more and more trans people on television, from newspapers to soap operas and movies. That our trans children manage to grow up in a less violent country, with affection at home and the right to minimal access to education, health and society in general.”

(*) Tanya Velazquez is a first-generation, undergraduate student at the University Texas of Austin pursuing a Bachelor of Arts in Journalism and in Latin American Studies, along with certifications in Spanish and in Human Rights and Social Justice. After graduation, she hopes to be a TV news reporter/ foreign correspondent who reports on timely issues throughout Latin America.

This story was produced as an assignment for the class “Journalism and Press Freedom in Latin America,” at the University of Texas at Austin School of Journalism and Media.