The forum moderator welcomes the attendees, introduces himself, briefly talks about the topic, introduces the speaker and carefully reviews the rules for the discussion.

This could be the beginning of any event where a group of people meet to exchange ideas on topics of interest, but this time, the meeting space is not physical, but online, and the platform used can be downloaded for free on any smartphone: WhatsApp.

Organized group chats called forochats in Spanish have gained popularity on messaging apps in recent years as a digital strategy for companies and institutions. However, it is not so common to see them as part of a media outlet's plan to reach new audiences. 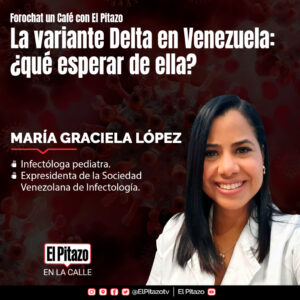 In Venezuela, due to poor Internet service, and more recently, the arrival of the COVID-19 pandemic, forochats have become a way to continue informing readers, support disadvantaged communities and find innovative ways to obtain financing.

The themes are diverse. There may be meetings with pediatric doctors about basic childhood vaccination; conversations with journalists who reported an investigation and more specific forums about problems in certain communities, such as the lack of essential services.

Once the speakers finish their presentation in writing, with voice notes or images, a round of questions is usually opened in the chat. Among the main rules are: avoid the use of stickers, keep language respectful and do not send chains, photos or videos to the group.

LatAm Journalism Review (LJR) spoke with representatives of three Venezuelan media outlets that have held forochatsin recent months as part of their communication strategy: El Pitazo, Crónica.Uno and El Bus TV. These media, digital natives with a social focus, tell their experience based on the difficulties they face and the benefits they receive.

Everything changed with the pandemic

Since 2017, El Pitazo has carried out an activity in the popular sectors of Caracas called ‘Un Café con El Pitazo,’ a conversation with invited experts and community members while sharing a thermos of coffee. 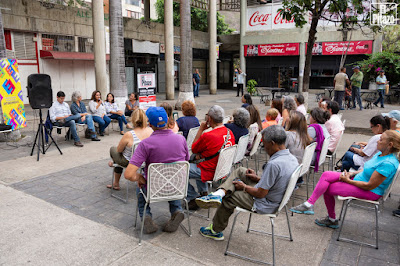 They also have the infocitizens program in which they train citizens in different regions on how to do journalism.

“Just on March 14, 2020, we were in Petare (one of the most dangerous neighborhoods in Caracas) giving an infocitizens workshop to some young people when the government of Nicolás Maduro declared a quarantine. We went into shock because our work is on the street and we thought that this initiative was going to stop,” Rena Camacho, infocitizens coordinator and now responsible for the media outlet’s forochats, told LJR.

A week later, the team at El Pitazo met and assessed the initiatives due to the impossibility of doing them in person.

“We decided to do the forums through WhatsApp because it is a popular platform among our audience and not everyone has the ease of using Zoom, for example. In the first forochat, 514 people were connected, divided into two groups,” Camacho added.

The media outlet Cronica.Uno has also carried out in-person forums for some years, which, in turn, were broadcast on Facebook Live. When the pandemic arrived, their dynamics changed and the initiative was on hold for a couple of months until June 2020, when they decided to migrate to WhatsApp. They began with a forochat talking about the COVID-19 contagion curve in Venezuela with Dr. José Felix Oleta as a guest.

“The neighbors of the communities asked us when we were going to return. So it occurred to us to design the WhatsApp forums that have a capacity of 257 people per conversation. At the beginning of 2021 we decided to transfer the forochatsto Telegram because it allows us to reach more than 500 people in a single group,” Norma Rivas, who is responsible for the project at Crónica.Uno, told LJR. 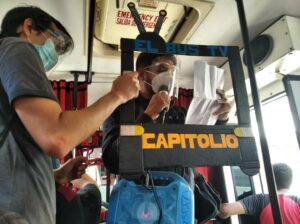 A "newscast" of El Bus TV in Venezuela (Courtesy)

In the case of El Bus TV, the pandemic fell like a bucket of cold water. The media outlet bases its work on offline journalism and on interaction with local communities. The initiative consists of the simulation of a television news program on bus routes in various cities in Venezuela – meaning there’s little possibility of social distancing.

As a result of the quarantine, El Bus TV had to expand its content distribution channels. 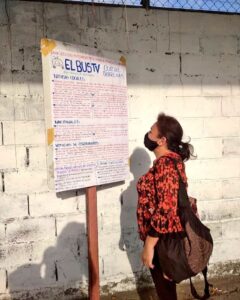 “We were off the buses for almost 10 months. Meanwhile, we began to explore the WhatsApp groups of bus drivers who have become our allies. We decided to start sending them messages with news on a daily basis,” Laura Helena Castillo, co-founder of El Bus TV, told LJR.

Then they realized that the forochats were another way to generate conversation among their audience, so they started doing them. They combined them with other initiatives to stay connected with their audience such as the “Ventana-TV,” a mock newscast that is narrated from the window of different residents of a community, and “flipcharts,” which consist of sticking a large piece of paper at key points where reporters can write relevant information.

More than one benefit

The benefits obtained by the media when conducting forochats cannot be summed up in just one thing. Many started with the vision of staying connected to their audience, but have had other unexpected successes.

The team at Cronica.Uno noticed that after the forochats related to the explanation of a report or investigation, the views on their website begin to rise.

"As when we did the forums in person, the benefit we obtain is to gain readership, to publicize our media outlet and get sources to visit and then enter certain communities," Rivas said.

Another advantage is that virtually, it is possible to reach a greater number of people. In person, El Pitazo could reach about 100 viewers per month with the forums. Currently, through forochats, on average they reach 2,500 people each month doing two or three weekly events. 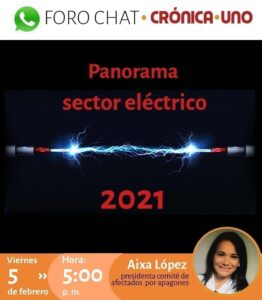 "We have reached more than 18,000 people since we started doing the forochats," Camacho said.

And although none of the interviewed media charges for attending virtual forums, gaining audience and notoriety eventually translates into economic benefits.

“Initially we began to see it as a way to continue informing our audience while we returned to the buses, with time and over the months donors also became interested in this activity. It's easy to do in a pandemic, you don't have contact with anyone and there's no way to get infected,” Castillo said regarding getting funding to hold the forochats.

However, the interviewees agree that the benefit goes beyond money. Their media were created with a social and hyperlocal vision, related to community support. Forochats have become another innovative way to help.

“With these forums we have done a beautiful and useful job for the communities. Public service is part of the job of journalists. We want to help and not just stay in the news events,” Camacho reiterated.

The journalist mentioned that on one occasion they did a forochat about problems in education and managed to connect the mother of a child with autism with a specialist so that he could give her particular recommendations. "That for us is already an achievement and is priceless," she said.

Not as simple as it seems

Putting together a forochat entails all the adrenaline of a live staging, according to those in charge of organizing the events at each of the media interviewed. In addition, the WhatsApp application carries with it the social pressure of immediacy.

“The forochat is that capsule, that very constrained informative moment where you expect questions, interaction and also during which the guest responds quickly. We have learned a lot and we continue to learn to give rhythm to these conversations on WhatsApp,” Castillo said of her experience with El Bus TV.

Although it seems simple and mundane to converse through a messaging tool, each forochat requires a pre and post-production process. 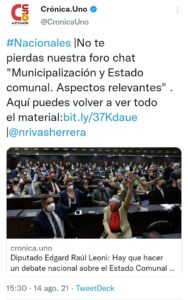 The El Pitazo team reports that prior to each forum they make a promotional article and spend time designing graphic pieces that accompany the expert's presentation. During the forochats, they do live coverage through Twitter and at the end they write a review that they publish on their website. They also produce a radio program, which is broadcast by 11 stations nationwide, where they summarize what was discussed in the forums.

It’s a dynamic that is followed by the Crónica.Uno team.

“We created the group, we designed the advertising and we created an article to promote the forochat. After the activity, we write an article with a summary of the discussion that is published on our website,” Rivas said.

The interviewees assure that they have found a space to continue connecting with their readers and audience, so they plan to continue holding these forums with a minimum frequency of one or two per month.

"We will continue with the same dynamics focused on dealing with social issues that contribute and help the most disadvantaged communities," Rivas said.