A report by Reporters Without Borders (RSF, for its initials in French) on obstacles to the distribution of print journalism in 90 countries highlighted Mexico as one of the “champions in obstructing the dissemination of newspapers and magazines.”

The report “Newspapers that never arrive – obstructing print media distribution,” was released on Sept. 23 and available in English and French on the organization's website, also highlights threats to the distribution of print media in Argentina, Brazil, Nicaragua and Venezuela.

In a survey of print journalists and distributors in 90 countries around the world – including Latin American nations of Chile, Costa Rica, Ecuador, Peru and the Dominican Republic, in addition to those cited above – 41 percent of respondents said censorship of print journalism takes place at points of sale and 22 percent said it happens while newspapers are being stored or distributed. 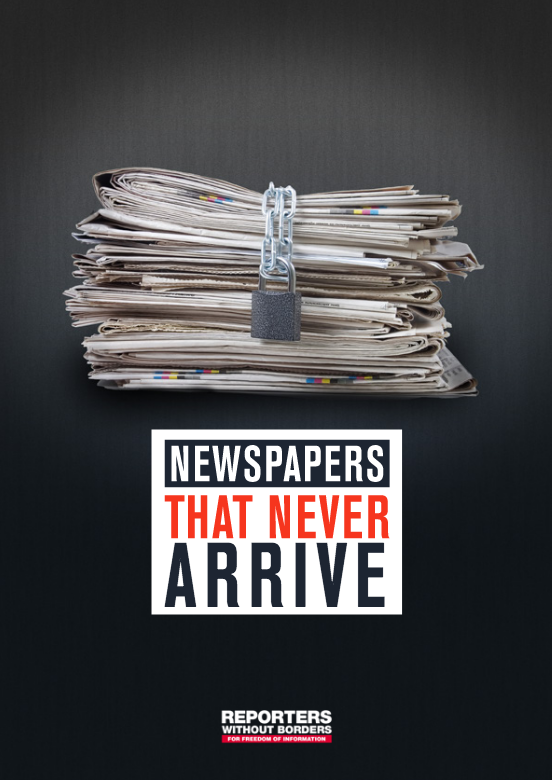 A screenshot of the RSF report

The themes of coverage that most motivate censorship at the time of distribution, according to survey respondents, are politics (21 percent), corruption (18 percent) and security and defense issues (17 percent). For 68 percent, the government or State is primarily responsible for obstructions in the print distribution chain, and 45 percent pointed to organized crime. Mexico was one of the countries where this answer was more frequent, the report said.

It was the only Latin American country among the five highlighted in the report as "serial censors" of newspaper and magazine distribution. These countries “don’t intervene at just one point in the distribution chain, but do so at multiple stages in order to secure complete control over what can and cannot be read,” the report said.

According to the document, “In Mexico, Latin America’s deadliest country for the media, the vicious cycle of violence and impunity occurs at all levels in the distribution chain. Street vendors are murdered, kiosk managers are threatened, newspaper issues are arbitrarily seized, and content is rewritten at the printing press. Collusion between organised crime and officials (political and administrative) poses a grave threat to all those involved in the production and distribution of news and information, and many publications end up deciding to close.”

The report states that the “voceadores,” as the street vendors are called in the country, are “part of Mexico’s culture.” They “shout the day’s news to hundreds of thousands of people, often in the remotest corners of Mexico, and play a vital role in informing countless communities.”

However, it is a “risky business in a country that is one of the most dangerous in the world for the media.” The report cites the case of Meréndez “Mere” Hernández Tiul, who was murdered while announcing the news of the day in Francisco Rueda in the Mexican state of Tabasco on Jan. 24, 2018. He was announcing the news of the arrest of those suspected of stealing motorcycles in the city when he was shot twice by a man who was related to one of the detainees mentioned in the news and who was also implicated in the robberies, according to the report. His murder, “like almost all murders of journalists in Mexico, remains unpunished,” it added.

Restriction of newsprint against independent press

In Venezuela and Nicaragua, the obstacles to the arrival of print newspapers to the hands of readers come from the governments of both countries, which have restricted access of opposition media to newsprint and other materials needed for printing publications, the report says.

The report cites the case of the Venezuelan newspaper Panorama, which published its last print edition on May 14, after 104 years in circulation, and speaks of “mass extinction” of the print media in the country since 2013. According to the Press and Society Institute (IPYS) of Venezuela, 67 newspapers have disappeared in the country in the last six years, 35 of them in 2018 alone, and there are no more newspapers in circulation in 10 of 14 Venezuelan states, according to the report.

This is due to the difficulties in obtaining newsprint, since its distribution is controlled by a Venezuelan government agency that has “a de facto monopoly of the importation, transportation and sale of this precious raw material,” according to the report. A Venezuelan journalist who spoke to the organization anonymously said the agency “allocates resources in a discretionary manner – when it wants, how it wants and to whom it wants – thereby becoming a direct censor of print media publications.”

The Nicaraguan government, according to the report, seems to have learned from the Venezuelan government and has used similar methods to silence “the independent national print media” of the country. The report references the increase in cases of censorship and persecution against media since April 2018, when protests began against the government of President Daniel Ortega, and it adds that, furthermore, “it has become virtually impossible for privately-owned publications to obtain newsprint, ink and even rubber,” materials necessary for printing newspapers.

The report points out that a ban on imports of these materials has been in force since September 2018, imposed by the Directorate General of Customs (DGA). “The ban is tantamount to a slow death sentence for the Nicaraguan print media,” the report said, adding that newspapers such as El Nuevo Diario, La Prensa and Diario Hoy have already shrunk the number of pages in each edition and told the organization they could stop circulation “within a matter of weeks.”

In Argentina, however, it is the private monopoly that threatens print publications in the country, the RSF report said. The “multimedia colossus” Clarín “reigns supreme” in the industry and, along with newspaper La Nación, has owned the country's only newsprint company since 1977. Newspapers that do not belong to these two media groups “constantly complain of distribution problems, arbitrary newsprint price hikes well in excess of inflation, and abuses in the quota system to which they are subjected,” the report said, adding that the result has been a “carnage,” with several print publications closed, including The Buenos Aires Herald, which shuttered after 140 years in circulation, and magazines El Gráfico and Los Inrockuptibles.

The report points out that in January 2019, the government of President Mauricio Macri signed a law that repealed the newsprint regulation that had been implemented by the governments of Néstor and Cristina Kirchner, leaving Clarín “free to set newsprint prices as it wishes” and releasing it from the obligation to guarantee the supply of newsprint in Argentina.

Regarding Brazil, the RSF report recalls the “unprecedented seizure” of copies of a newspaper that took place in 2018, a few days after the second round of presidential elections that brought current leader Jair Bolsonaro to power.

At the time, electoral judge Sandro de Araújo Lontra ordered the police to seize 30,000 copies of the newspaper Brasil de Fato in Macaé, Rio de Janeiro. The judge based his order on the perception that the edition contained “articles that defame the candidate Jair Bolsonaro” and accused the newspaper of “abuse of authority,” the report said, adding that Bolsonaro “is well-known for his fraught relations with the press.”