This story was updated to include details about the funding of the project.

When the radio reached Latin American homes in the first half of the 20th century, families and neighbors gathered around the device that brought stories from around the world in sound waves. Almost 100 years later, a podcast is updating the practice of collective listening to bring Latin America closer to its stories and foster ties among its listeners. 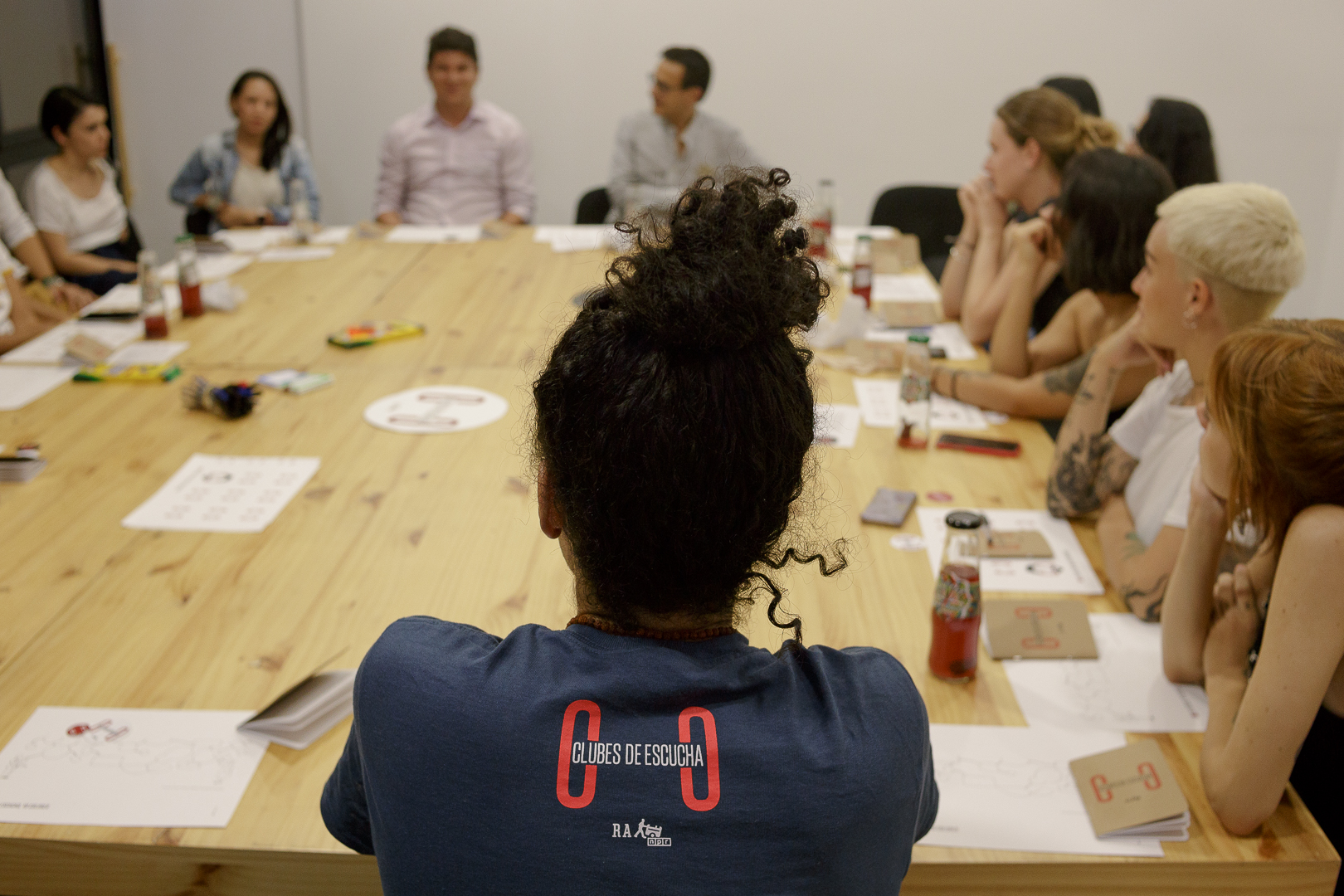 They are the Clubes de Escucha (Listening Clubs) of Radio Ambulante, a podcast of stories about Latin Americans and Latinos in the U.S. that was launched by Colombian Carolina Guerrero and Peruvian Daniel Alarcón in 2012, and that since 2016 has been part of the U.S. public radio network NPR. The clubs have been gathering podcast listeners in various cities in the region to listen to the shows together and talk about them.

The idea is “to provide spaces for the communities of Radio Ambulante listeners to meet face-to-face, and take advantage of the stories of Radio Ambulante to have conversations, to get to know each other better and to strengthen networks among themselves,” Jorge Caraballo, audience editor at Radio Ambulante and coordinator of the Listening Clubs, explained to the Knight Center.

The project was conceived in the second half of 2018 and was implemented in the first few months of 2019 in five Latin American cities: Quito, Ecuador, Medellín and Bogotá, Colombia, San José, Costa Rica, and Mexico City. It has also happened in New York, where it returns in May, when the last listening club of this first cycle and the celebration of the seven years of Radio Ambulante will take place, the coordinator said.

According to Caraballo, the cities of the first listening clubs were chosen based on the locations of the Radio Ambulante team, that is to say they are multinational and spread across several countries.

“It has been a fascinating experience. We have learned a lot, we have collected very valuable information, and we have proven that there is a great interest of podcast listeners not only to listen, which is already large in that media ecosystem where there is so much information, there is so much noise, but they also want talk with others about what they are listening to,” Caraballo said.

The clubs promoted by Radio Ambulante have worked like this: people arrive at the venue and sit around a table – “it’s very important that everyone is looking at the faces, that everyone is at the same level, that there aren’t people who are more important than others,” the coordinator of the initiative explained. A moderator welcomes those present, explains the project and Radio Ambulante’s reasons for doing it and plays the selected episode.

People don’t just listen to the podcast in silence, Caraballo said. “We give them paper and colored pencils and they can draw and color, so that they concentrate on a manual activity while they are listening.”

At the end of the story, the debate begins, with the moderator proposing guiding questions from the episode so that the conversation flows among the participants. At the end of the event, they are invited to complete a feedback form, from which the Radio Ambulante team has collected very important data, the coordinator said.

“Almost all people say that the quality of conversation in a listening club is much greater than that of social networks, or say that they need more space to meet people in their community in person to discuss topics that interest them, and that listening clubs meet that need,” he said.

The selected episodes can foster this conversation. In the first listening club in New York, at the end of February, an unpublished episode was presented, which would be published on the website in two weeks. “People are very attentive because they are aware that they are the first people to hear an episode that hundreds of thousands of people are going to hear,” Caraballo said. He added that comments from early listeners eventually led to minor editing changes. “They were small things, but they helped us to improve the episode even more.”

But what most mobilizes the listeners are episodes that have a thematic connection to the places where the listening clubs are being held, the coordinator said. In Medellín, for example, one of the events listened to the episode Narco Tours, which deals with the collective memory of the city in relation to the drug trafficker Pablo Escobar. “Everyone had something to say,” said Caraballo, who co-produced the episode and was moderator of this edition of the club in Medellín.

“When we started thinking about the listening clubs, we said that it is very important that people can meet with strangers from their community and reflect on that context that surrounds them, the city they inhabit and how they inhabit it,” said Caraballo, for whom the clubs are “a project of civic education.”

“True, it is civic journalism in some way. These stories are triggering citizen conversations that can become actions that transform the context of these people, can mobilize people to seek the changes they need. You are not listening in solitude, you can feel that there are many other people there in front of you who could join forces to do something.” 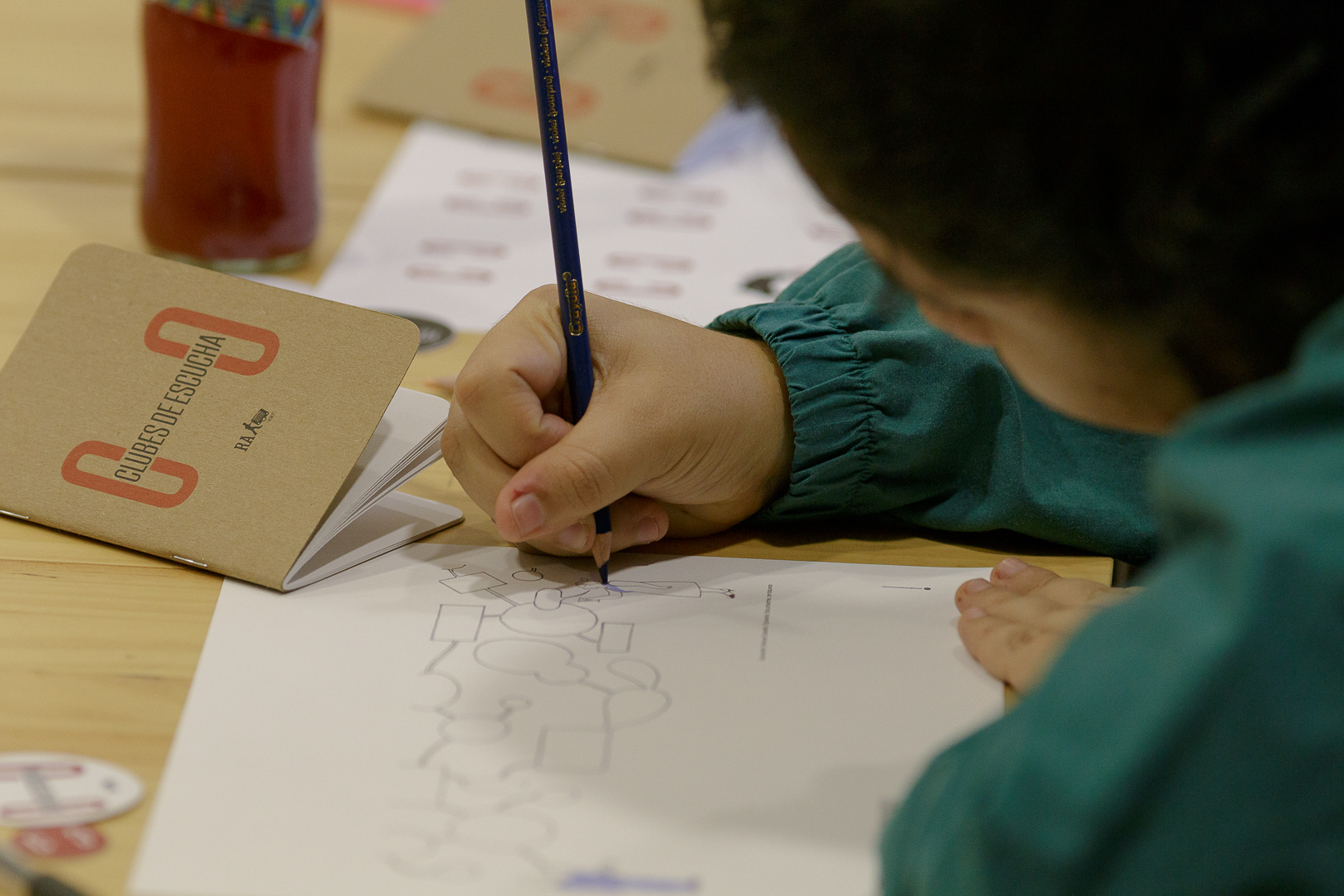 During listening clubs, attendees are given colored pencils and paper to draw while they listen. (Courtesy)

Additionally, the listening clubs held so far allowed members of the Radio Ambulante team “to see, in real time, the impact that the stories have, the impact that journalism has and how this project that we work on for months becomes a conversation and a collective desire to do something, to act and that is something that is very exciting.”

“We need to get closer to these people and we believe that listening clubs are a very friendly way of approaching podcasts and finding value in podcasts,” he said. “If it is an episode that seems important to you and that helps you understand your city in a different way, you will leave that listening club and recommend the podcast to even more people.”

Although almost all the listening clubs held so far have been moderated by the podcast team, the idea is for the model to be replicated by listeners around the world. For this, Radio Ambulante is preparing a manual with a step-by-step guide with the best ways to hold a listening club, valid for any podcast. The manual will be made available online after May, when the test cycle of the clubs ends.

According to Carballo, more than 200 people participated in the listening clubs during the pilot program, which was carried out thanks to support from the News Integrity Initiative of the Craig Newmark Graduate School of Journalism in New York City, and more than 100 ambassadors are prepared to organize clubs in 60 cities globally.

“We would like to continue doing them, but we would like it even more if it was the people who start to spontaneously replicate them. When we launched the idea and asked if there were people interested, more than 200 people responded to us and they mentioned cities from more than 50 countries,” Caraballo said. “We would like it to be listeners [to promote the listening clubs] and not just the listeners but also other podcasts. We would love for other podcasts in English or in any language to replicate the model and tell listeners: ‘hey, why don’t we do a listening club?'”