The year 2018 has posed several challenges for fact-checking initiatives in Brazil. In addition to general elections permeated by intense political polarization and the new weight of social networks in the dissemination of rumors, fact-checking professionals are also faced with the distrust of the public, still in doubt about the role of fact-checking in the Brazilian media environment.

To navigate with a little more security in the sea of misinformation during election season, Agência Lupa, a pioneer in fact-checking in Brazil, innovated using a well-known role in professional journalism: the ombudsman. Journalist and editor Fernanda da Escóssia has just started in that role as ombudsman and reader representative. 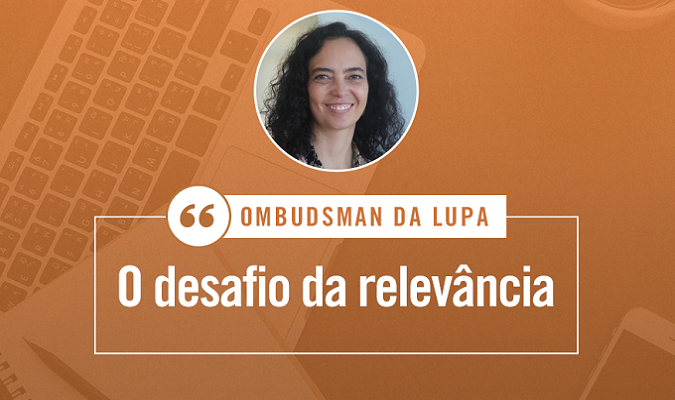 Cristina Tardáguila, director and founder of the agency, told the Knight Center that, since January, she has thought about bringing on an ombudsman for the project. In May, Lupa began participating in verifying news on Facebook, along with fact-checking agency Aos Fatos and Agence France-Presse. The initiative was met with hostility from some members of the public, who accused the outlets and the social network of attempting censorship and acting with ideological bias – left or right, depending on the source of the criticism. Professionals at Lupa and Aos Fatos were targeted by virtual attacks and even death threats, according to Tardáguila.

"In the midst of all the hatred and death threats that we received, there were criticisms that made sense and had a point, and that ended up mingling with everything," the director of Lupa said. "At that moment, we saw that that idea was more than vital, so that we had someone who centralized the criticism within the agency in a professional way, and could dedicate themself exclusively to hearing what was coming in, and that was not, of course, hate speech, but constructive criticism."

The agency wanted someone for the task "with one foot in the newsroom and one foot in academia,” Tardáguila said. Escóssia lived up to expectations: she has worked as a reporter in several outlets and as a country editor at newspaper O Globo. She also has experience with academic research and teaching at the School of Communication at the Federal University of Rio de Janeiro (UFRJ).

As an editor at O Globo, Escóssia was one of Tardáguila’s partners at the blog Preto no Branco, the first fact-checking initiative of a major newspaper in Brazil, launched to cover the 2014 general elections.

She was then invited to occupy this post from mid-August to early November after the elections. Her work will be to follow the criticism of Lupa's readers, both on social networks and those received by email (ouvidoria@lupa.news), and to evaluate the content produced by the agency. From this, she will write an internal report each week for the newsroom, and a column, which will be published on Lupa’s site every Thursday.

"I think this role of representing the readers is important, the role of the ombudsman. It is an exercise in transparency that is important, so that readers can make their criticisms, their charge," Escóssia told the Knight Center. "It's good when readers are attentive and involved. After all, the reader is the purpose of our activity. We do not write for ourselves, we write for them."

Her first column was published on Aug. 23. The text provided comments on Lupa's coverage the previous week, answered by the newsroom, and an affirmation of fact-checking as a journalistic exercise in pursuit of accuracy and relevance.

"Checking is being understood as an attempt at censorship and there have been accusations from the most varied, but I understand that this idea is wrong," the ombudsman said. "Checking does not intend to be the final word, this ministry of truth, as some accuse. What the check wants is to know whether what people say has bearing on the facts, in reality. It is an important exercise for the journalist and is a service to the reader, which favors democracy, not the opposite. Journalism is a pillar of democracy, and checking is a part of that activity."

The first intervention of the ombudsman has already had its effect on the Lupa newsroom.

"Everyone agreed with the criticism of the first column," Tardáguila said. The "most sensitive point," according to the director of the agency, was a criticism of Escóssia that Lupa did not produce material on the UN Human Rights Committee's statement in defense of the political rights of former president Luiz Inácio Lula da Silva, who is in prison and is running for president in 2018. As soon as it received the ombudsman's commentary, the newsroom was mobilized and published a check of phrases of public figures on the subject the same day. "It really rattled the newsroom," Tardáguila said.

For the director of the agency, one of the main challenges for the Lupa team and for the ombudsman in this election period will be the pressure for information at a rate faster than the fact-checking work is capable of delivering.

"The ombudsman will be pressured by the digital universe, by the people who are on the networks. Usually they are people who want information very quickly. The networks have this immediate charge," Tardáguila said. "There is only a live check when the checker is prepared. I think you have to have an understanding of this timing, that in order for the check to be well done, the checker needs to have a repertoire. Only when he has a collection, can he be quick."

In addition to the fight against time, the great battle of fact-checking in the Brazilian pre-election period is between "facts and data" and "beliefs, likes and desires," the director of the agency said. "The only way out is to keep checking. Lupa has no chance of deconstructing a taste, a belief, a desire. It can only present a piece of data and a fact. It is the decision of the person to choose whether she will stay with the first ones or pay attention to the second. What Lupa does is present this possibility, nothing more."