Since 2008, the Iberian American Colloquium on Digital Journalism has been a conference in Spanish, held at the University of Texas at Austin annually, the day after the International Symposium on Online Journalism (ISOJ). It usually gathers 100 to 125 journalists, media executives and scholars from Latin America, Spain and Portugal who travel to Austin to attend ISOJ. 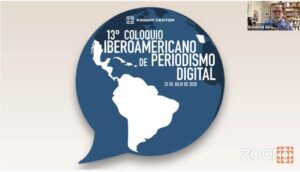 In 2020, as ISOJ had to become an online-only conference due to the pandemic, so did the Coloquio Iberoamericano de Periodismo Digital. The Colloquium was held on Zoom, with live streaming also on the Knight Center channel on YouTube. Following the tradition, it happened the day after ISOJ, on Saturday, July 25, from 9 a.m. to 2 p.m. (U.S. Central Time).

Click here to see the program of the 13th Iberian American Colloquio and click here to watch the video of the five-hour Coloquio, available on YouTube.

“It was a last-minute decision because we were not sure if we had the capacity to organize the biggest ISOJ of its 21-year history and the Coloquio in the same week, but we made it in a grand style,” said professor Rosental Alves, founder and director of the Knight Center for journalism in the Americas. “We hosted the best ever Colloquium, with a strong program that included amazing speakers from Spain, Portugal, Brazil, Mexico, Colombia, Cuba, Nicaragua, El Salvador, Uruguay, Argentina, Chile and other countries.”

Attendance and participation for the Colloquium broke records. The online version of the Colloquium had 751 attendees on Zoom plus a bigger audience in the easy to access YouTube channel, which by early August had already accumulated more than 2,000 views.

If you missed the Coloquio live stream, you can watch it now on YouTube and you can also read those stories prepared by the LatAm Journalism Review team: