Democracy and respect for people’s civil rights seems to be that dream that is yet to be reached in Latin America; meanwhile journalists continue with their part in the struggle to report on what they believe is the “correct side of history” against abusive powers. María Teresa Ronderos, director for CLIP, started the conversation with this reflection in the panel “Journalism in the face of hostile governments: Reporting on the democratic crisis in Central America,” during the 13th Ibero-American Colloquium on Digital Journalism.

For almost an hour, Carlos Fernando Chamorro, director of the magazine Confidencial in Nicaragua, and Carlos Dada, cofounder of El Faro in El Salvador, talked about the role journalism plays in a democracy and how to continue this role with an authoritarian and populist government, in the middle of attacks, threats and harassment.

For Chamorro, what is happening in Nicaragua has long turned from being hostile to becoming a place where the press is crushed by the government. With more than a decade in power, Daniel Ortega has "dismantled democracy gradually" to establish an "institutional dictatorship" where different freedoms, including that of the freedom of expression, are violated. The press is one of the "main targets of aggression of the dictatorship,” he said.

In the country, there have been documented cases of journalists being killed, imprisoned, and media outlets have been destroyed or occupied by the police - such as Chamorro’s Confidencial magazine -, and there is also an absolute control over public information. 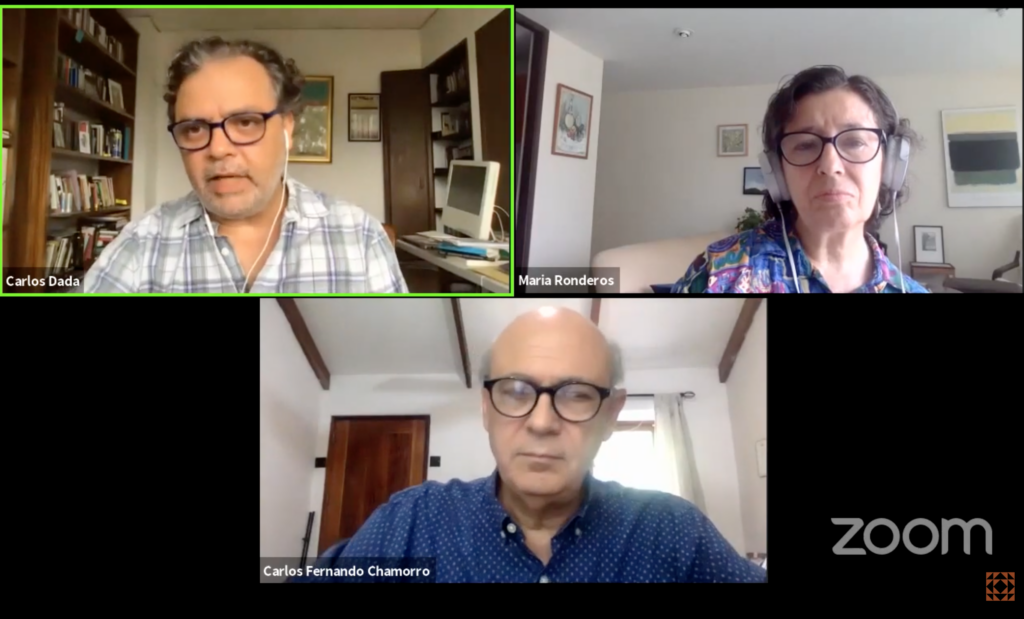 “To summarize, the relationship is absolutely combative. For the State, the press is the enemy, and it is important to say that there are no counterweights, there is not a parlament, there is no prosecutor, there is no human rights lawyer that journalists or citizens can go to,” Chamorro said. “Journalism is done in that type of environment, a situation that is critical even more with the extreme centralization of information when the pandemic hit with COVID-19.”

It has been a critical time for the press under Ortega's government, Chamorro said, because it has left journalists with "moments of deep solitude" leading them to feel like they are "preaching in the desert." Despite this institutional dismantling that left journalists with no agency to turn to, they have decided to continue with their work. "We concluded that there was no other way to resist [the attacks] than to continue doing journalism and appealing to trust, to the relationship with our audiences, also trying to make alliances with other sectors," he said.

Eventually, that relationship with those audiences and their persistent work is beginning to pay off. Journalists began to work alongside citizens when they protested and recorded the government’s repression in April 2018. "Journalism does a great job of professional curatorship over all that process and I felt that we began to reap the seeds of journalistic credibility that we had invested," Chamorro said.

The credibility that their audience has in them has also seemed to have an effect on their sources. An example that Chamorro gave was how Confidencial was able to obtain and publish figures of the tests carried out and the confirmed cases of COVID-19 in the country by official sources; information that since the eruption of the crisis have had their access to them denied to anyone, except the vice president and first lady, Rosario Murillo, whom are authorized to speak on them.

"I believe that the most important thing has been to resist, with persistence and with perseverance that better days would have to come," Chamorro said. "And I think that in the midst of the pain that this massacre has represented… I believe that in the midst of that pain we are living better days, that journalism in Nicaragua today can say that it has a future and there are more of us independent journalists today than there were before, because many media outlets that were co-opted by the regime and who were allies of the regime when it came time to choose between the truth, the basic element of the truth in the face of a massacre, they chose the truth.”

Ronderos said that although the case in El Salvador is not yet like the situation in Nicaragua, it does "feel like [the government is taking] big animal steps" to becoming a more authoritarian government since Nayibe Bukele came to power a year ago. The president is someone who "would like to govern under these conditions of absolute control," Dada added.

For Dada the arrival of Bukele to power can be explained starting with the youth of democratic life in the Central American countries. Democracy, according to Dada, was the population’s aspiration to improve their living conditions, especially after the civil wars. Beyond the political plurality and the role of the press, which is significant progress for Dada, the conditions of the people as such did not change much in terms of security, poverty, opportunities, to mention some.

This poorly understood nonconformity with democracy "opens the door for authoritarian aspirants in Latin America," as in the case of Bukele in El Salvador, Dada explained. His first acts as president were "absolutely undemocratic," Dada said, like when Bukele entered the Legislative Assembly with armed soldiers, "something that not even the military presidents had dared to do for most of the 20th century." He also said that the president has ignored some of the Supreme Court’s decisions and  has declared an enemy to anyone who opposes his decisions.

"When we speak of enemies of his dictates, the critical press occupies one of the first places," said Dada, for whom these attacks on press freedom have been unprecedented since the end of the war.

Citing the Association of Journalists of El Salvador, Dada said that since Bukele took power there have been 61 attacks against journalists, including censorship, - such as denying access to press conferences to outlets that are seen as critical of the president – smear attacks with entire campaigns such as those of the magazine Factum and El Faro, closure of roads to access public information, tax harassment, and lately attacks that put in danger the physical safety of journalists.

"We have suffered harassment, interceptions, espionage, vehicle follow-ups and in the last fifteen days two journalists have had their homes broken into in which their computer is the only thing that is taken," said Dada, who added that one of them was publishing figures and mathematical models about COVID-19. "When you have crossed this line, which had not been crossed by previous governments, the dark and aggressive nature against press freedom of this government begins to become more worrying," he insisted.

According to Dada, the press has become a target because it "is capable of scratching and finding the scandalous corruption" of the government. These attacks are aggravated by the pandemic and the localized outlook, focusing on their own countries and avoiding international attention to them.

"If you add to that that airports are closed and borders are closed, attacks on the press, on various media outlets in El Salvador, as it is happening right now, it become easier for the current government [to carry out these attacks] because they do not have that external gaze that, at least in countries like ours, was more important before.”

What Chamorro and Dada agree on is that despite these difficult circumstances it is their duty to continue their work. At some point, Chamorro said, the work will give fruit, which is a belief that Dada supports.

“I think that the role of journalism, even in a country where an authoritarian and corrupt president like this one is so popular, is to continue informing the society of what is happening… and to resist the storm of insult and [efforts to] discredit that fall upon us every day,” Dada said. “But, if we really believe in a democracy… media outlets have to insist in our role in that democracy, we have to promote public debate, we have to continue informing the society of this dismantling of our democratic life, and we also have to form the population with democratic matter because a democracy also doesn’t work if the citizens are not informed and better prepared, in other words, more engaged with this democratic process.”

Despite the fact that journalism cannot generate changes on its own, Chamorro said, persistent work can lead to other people raising their voices.

“I believe that the society of which Carlos Fenando speaks of, is a sensation a bit similar to what is beginning to appear in El Salvador, it also comes from another thing: power intimidates anyone, any voice that opposes them. It is about eradicating dissent or at least their voice, most of all their voice…” Dada said. “But I think that in that solitude that Confidencial continues with their work, that has also helped to embolden other people who are now standing up in that process of complaints against an authoritarian regime.”

Chamorro ended with speaking about a similar resistance shared by Nicaraguan and Venezuelan citizens and journalists. He said he called them to find other ways to overcome censorship and prevent authoritarian narratives from prevailing.