“My life has changed radically. I feel pain in my waist, back and head, where I was hit more often and I developed a lung problem. Above all, I am afraid to work in my studio,” Argentine journalist Luis Mancini told LatAm Journalism Review (LJR) eight months after the cowardly assault he suffered while presenting his live program on FM Horizonte in the city of Villa Río Bermejito, province of Chaco. The frequent pain is the result of the attack, which caused head and chest trauma and lung injury. 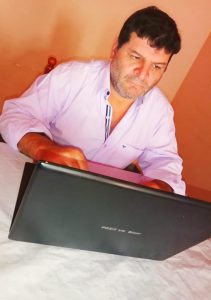 Mancini's case is one of 82 attacks on journalists and communicators recorded in Argentina last year, according to the 2020 Monitoring of Freedom of Expression Report, from the Forum of Argentine Journalism (FOPEA, for its acronym in Spanish). After two years of relative stability, attacks on journalists jumped 41 percent. In 2019, 58 attacks were recorded, compared to 51 in 2018.

Then-municipal secretary of public works César Gavilán and his brother were arrested for the attack on Mancini, but were released and report for the judicial process from freedom. They were easily identified because the violence was recorded by the studio's camera.

“They continue to threaten me,” Mancini said, adding that his son changed schools because a relative of his attackers works there. Despite this, the journalist continues to work on the radio and on his website, Horizonte Impenetrable.

Before the assaults, Mancini had denounced irregularities in the construction of popular houses and the illegal collection of social assistance (Emergency Household Income, or IFE) by relatives of the mayor of Villa Río Bermejito.

Chaco, where Mancini lives, leads the number of records of attacks against freedom of expression in the FOPEA survey when considering only the provinces of the interior – excluding the province of Buenos Aires and the Argentine capital. In Chaco, which has 2.6 percent of the Argentine population, there were seven cases of violence against journalists in 2020, 8.5 percent of the total. 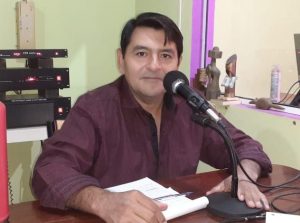 Argañaraz, attacked during a demonstration in Miraflores, Chaco: “denunciations do not prosper” (Courtesy)

"I was taking photos. When I realized it, [the attackers] were already on top of me," journalist Raúl Oscar Argañaraz, of Rádio FM Contacto 94.5 and the site Panorama Informativo Digital, told LJR. “There were four people, they had bricks in their hands, they pushed me. They said that I did not have permission to take photos, I did not let them take my phone, but they took my camera.”

Algarañaz was covering a demonstration by members of the original peoples in front of the headquarters of the municipality of Miraflores, also in Chaco, on Oct. 16, 2020, when he was attacked. He told LJR he was able to identify and report the attackers later, but, according to him, the denunciation went nowhere.

The Chaco situation reflects a trend towards an expansion of violence against journalists in the interior of Argentina, according to FOPEA data. While the city of Buenos Aires and the province of Buenos Aires have 46 percent of the Argentine population, they accounted for just 35 percent of cases in 2020.

“As we improve our alert system in the territory, we are able to make more situations visible, and make it less natural when there appears to be an attack on the press. The monitors of each province are in greater contact with the rest of the monitors in the country, and we also incorporate a more extended legal consultation network. The cases have also grown because aggression against journalists grew during public protests, something that is also happening in other Latin American countries,” Fernando Ruiz, FOPEA president, told LJR.

Radio professionals, such as Mancini and Argañaraz, are among those who suffered the most attacks in Argentina in 2020: 21 percent of the cases monitored by FOPEA occurred with workers in this medium. TV journalists lead the survey, with 23 percent.

In addition, physical and psychological aggression, as well as attacks on property, are more than half of the total violations recorded in the FOPEA survey, with 43 cases. Nineteen cases are categorized as intimidation, like the threats suffered by journalist Diego Brancatelli, from América TV, after his personal phone number was leaked on the internet.

“We are all used to being insulted, we are not bothered by freedom of expression, we have a different opinion and that's it. But this time there were concrete threats from many groups,” Brancatelli said on América TV. “They were all going to the same thing: 'We are going to make you disappear,' 'We are going to put you on the green Falcon,’ 'We have to exterminate you,’ 'We are going to put a bullet in your head.’ Words that even make me ashamed to repeat them.”

The journalist filed a complaint after the threats began to be directed at his family, including his children.

“The most serious thing we have is that there are governments at the provincial and national level that have voices that harass journalistic practices. (...) Among all these sectors, they try to intimidate the main investigative journalists, and it also generates an effect of self-censorship among the rest. The use of social networks to carry out campaigns to destroy the prestige of journalists is perhaps the main threat we have today,” Ruiz said.

“I would like there to be consequences [for the aggressors], for freedom of expression to be respected, for us to be able to work freely,” Algarañaz said. “But the complaints are not successful."

Still, under risk and threats, the work of Argentine journalists continues to have a positive impact on society. An investigation by Mancini, regarding the embezzlement of funds for the construction of popular houses, resulted in the seizure of property of a former mayor of the city: six properties, 20 vehicles and more than 3 million pesos in cash (about US $32,000). The Federal Court confirmed the decision in the second instance and the funds will be returned to the public coffers.