For the first time, the Central American Journalism Forum (Foro Cap) was held in person from three countries: Guatemala, Honduras and El Salvador.

The so-called northern triangle of Central America hosted 15 talks, 5 master classes, 4 face-to-face workshops, a documentary, an illustrated stand-up and a closing concert in the span of a week. In addition, there were more than 50 guests including journalists, media experts, political leaders and artists. 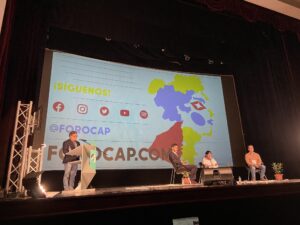 An event hosted and organized by El Salvador’s El Faro, the first newspaper in Latin America created exclusively for the internet, San Salvador had served as the headquarters of the forum since 2010. However, this year the organizers were concerned that the Salvadoran authorities might prevent some of the guests from entering the country.

Last July the government of President Nayib Bukele expelled and denied a work permit to the Mexican editor of El Faro, Daniel Lizárraga. The argument, as El Faro director and founder Carlos Dada said at the time, was that Lizárraga could not prove that he was a journalist.

"We take advantage of this crisis to get the forum to walk through Central America," Dada said at the opening of the event. “We really wanted to do the forum in other countries, but we never had the time or the resources to do it. It had to be the pressure of the Salvadoran regime that pushed us to do it once and for all. Which speaks at the same time of the situation of harassment that journalism is experiencing today in the region and of the firm will to respond with more and better work.”

An example of these pressures occurred while the forum was taking place. On Nov. 9, the Legislative Assembly of El Salvador began discussing the Law of Foreign Agents that seeks to “prohibit foreign interference” in that country by regulating and imposing a 40 percent tax on all civil society organizations or persons receiving funding from abroad. The law would also apply to media and journalists, according to El Faro.

Dada expressed his concern about the decline in democracy that the Central American countries are experiencing – especially because of the journalistic persecution carried out by their governments.

The director of El Faro named and reviewed some of the situations journalists have had to experience in Central America: “monitoring, espionage through wiretaps, delegitimization and hate campaigns, opening of judicial processes, fabrication of cases and legal reforms to make accusations of money laundering.”

He also reflected on the reasons for the attacks. According to Dada, journalists represent an obstacle to the accumulation of power and present an alternative version to the realities of propaganda by denouncing corruption and abuses of power.

“I would like to see this forum as an opportunity to reflect on our situation, to start a conversation that leads us to face together, better organized and accompanied, the wave of orchestrated attacks on Central American journalism from each of our governments. Together, organized, we will better resist” the journalist said, welcoming attendees.

Forocap not only reflected on the past, present and future of journalism. As it described on its Facebook page, the main objective of the event "is to be a meeting place between citizens and journalism to be able to dialogue about the emergencies facing our societies."

One of these urgent issues is the violation of constitutional and universal human rights such as equality before the law and freedom of expression in the region. When talking about these problems, politics had an important weight in the different conversations during the week of the forum.

The first talk of the event was titled “Memory, Truth and Justice.” During it, human rights defenders and activists Otilia Lux de Cotí and Manuel Gonçalves Granada told their personal stories and about their work in the search for the disappeared after conflicts and dictatorships.

The conversation was moderated by journalist Juan Luis Font, director and co-founder of Concriterio, who responded to Dada's opening speech saying “Central American journalists are not going to be silenced. Central American journalists are going to do a better job, we are going to offer better information, better discussions, better debate so that we can all continue to enrich ourselves with what is a fundamental right: freedom of expression and access to public information."

Another open conversation about politics was the talk entitled "What do we hope will change in Honduras?", held on Nov. 9. In it, participants discussed the harassment and violation of human and environmental rights of the Garífuna communities and the mismanagement of the COVID-19 pandemic in that country. But there was also a discussion about the work of the political parties and the change of Suyapa Figueroa, president of the Honduran Medical College (CMH), who went from being an activist to a candidate for deputy of the Salvador Party of Honduras.

Keep doing journalism despite the attacks

Forocap's Twitter posts are full of comments where participating journalists are  attacked. Anonymous accounts or those with few followers accuse them of receiving illicit money, of not being good journalists, of being biased and also bombard them with insults and disqualifications. 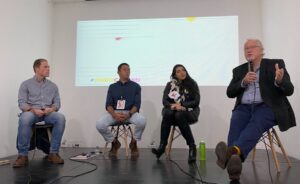 So, it is not surprising that several of the conversations during the forum brought up harassment of journalism. In the discussion entitled 'Journalism is not the enemy', held on Nov. 8 in Tegucigalpa, journalists Marvin del Cid of Guatemala, Jon Lee Anderson of the U.S., Joseph Poliszuk of Venezuela and Jennifer Ávila of Honduras told their stories of oppression and reflected on how journalism can become a way to consolidate healthier democracies in the region.

For her part, in Guatemala during the talk 'Why do silenced voices need to keep talking?' journalist María Hinojosa, founder of the U.S-based Futuro Media Group, said that journalists have the ability to change the conversation when a government tries to dictate the agenda and that the Central American media inspire her to follow through with their example.

“The life of a journalist is by no means easy. If you are working independently you will have your problems, if you are in a mainstream media outlet you will also have your problems. This is not the time to shut down and think that we can't do it. We can do it all,” Hinojosa said.

The closing talk of Forocap featured a summary of harassment against the Central American press and an explanation of its relationship with the deterioration of democracies. The conversation was led by editor-in-chief of El Faro, Óscar Martínez, and the director of Programs for the Americas Program of the Committee to Protect Journalists (CPJ), Carlos Martínez de la Serna.

And although the talk, for a moment, seemed to be discouraging, it had its rays of hope. “I have had the privilege of being in the three countries where Forocap was held: Guatemala, Honduras and El Salvador. There are many anguished journalist colleagues, but I have not found anyone who is thinking of leaving the profession of journalism," the editor-in-chief of El Faro concluded.