For the past six months, the Knight Center for Journalism in the Americas has brought together journalists from across Latin America and the Caribbean for training and discussions around the topic of diversity in journalism. The project started in January with a massive online course, continued in March with the first Latin American conference on diversity in journalism and culminates now with the launch of a book.

The pioneering e-book “Diversity in Latin American Journalism” will be launched during the annual conference of the National Association of Hispanic Journalists (NAHJ).

“It’s no coincidence that we are launching the book at NAHJ, a organization that should be commended for its decades-long efforts to promote diversity in the newsrooms of the United States, a great example for Latin America, and the world,” said professor Rosental Alves, founder and director of the Knight Center, who also directed this project.

The ebook includes reflections from 16 journalists from seven countries on how to make newsrooms and news coverage more inclusive, and five of those authors will be on the July 17 panel at NAHJ from 12:30 to 1:30 p.m. (U.S. Eastern Standard Time). It will be on the last day of the signature week of a month-long conference that this year had to be online-only due to the pandemic.

The book will be available for free download from the Knight Center’s Journalism Course website on the same day of the panel.

Panelists include four co-authors of the book -- Andrea Medina (from Chile); Jamile Santana (from Brazil) and María Teresa Juárez and Eladio González (both from Mexico). Mariana Alvarado, who edited the e-book, will also participate in the panel that will be moderated by Professor Alves. 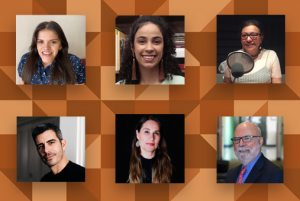 “In Latin America, unlike other regions in the world, the management of diversity is incipient, it is new,” Alvarado said. “I estimate that it is only in the last decade that traditional newsrooms began to pay more attention to diversity. However, as they fall short, new and several more niche digital native media have emerged that seek to address diversity from different fronts: feminist media, media that cover and target people with disabilities or ethnic and racial issues.”

“Although it is barely incipient, I consider that what has been done is very remarkable and of high quality. There is no doubt that with this demand, at a global level and with greater emphasis in Latin America, newsrooms will be more inclusive, and that is also reflected in their coverage,” she continued.

Prior to the ebook, the Knight Center, with support from Google News Initiative, offered a Massive Open Online Course (MOOC) on the topic, and organized the First Latin American Conference on Diversity in Journalism.

Taught by Peruvian journalist Marco Avilés, “Diversity in the News and Newsrooms,” originally ran from January to February 2021 as a MOOC, but it is now available online as a self-directed course and can be taken anytime and for free through the JournalismCourses.org platform.

During the pioneering diversity conference that was held on March 26 and 27, a group of 22 speakers from the continent spoke about gender, sexual orientation, racial and ethnic issues and disability. Video from each panel can be viewed on the Knight Center’s YouTube Channel.

Now, the ebook will be published in Spanish and available to download for free from the Knight Center’s JournalismCourses.org.

The authors, as Alvarado pointed out, are leaders in promoting diversity within newsrooms, and some have launched digital native media outlets for and by more diverse audiences.

“It is important that we show in this book what has already been done, but also that it serves as a guide, with advice and tips for those who are interested in promoting the DEI language (diversity, equity and inclusion),” Alvarado said. “These concepts are, in the context of Latin America, more important than ever.”

“As you will read in the book, Latin America is diverse and it is important that this diversity is reflected in the newsrooms. By having more diverse newsrooms, we have more pluralistic, more democratic newsrooms and that is the best way to contribute to quality journalism that serves all ethnic groups and different communities. We cannot continue to focus on just one segment of the population because our Latin American population is rich and diverse,” she concluded.

“There is a clamor around the world for diversity, equity and inclusion,” said Professor Alves. “We hope that this project and the future work of the Knight Center contribute to the awareness and the debate about DEI among journalists, media executives and journalism scholars in the Americas.”