WhatsApp has 120 million active users in Brazil, according to what the company reported in July this year. This number is equivalent to more than half of the Brazilian population, estimated at 208.5 million people. In this election season, whose first round took place on Oct. 7 with a second round scheduled for the 28th, the messaging application became the main information space for users and electoral campaigns - and also, regrettably, sharing rumors and lies aimed at favoring or harming certain candidates.

After appearing in Colombia in May and passing through Mexico, O Poder de Eleger  fact-checking project debuted in Brazil in August, aiming precisely at the WhatsApp as the source of the problem and a possible solution to widespread misinformation during the elections. The initiative is part of the international network Chicas Poderosas, which seeks to foster the presence of women in the leadership of digital media. 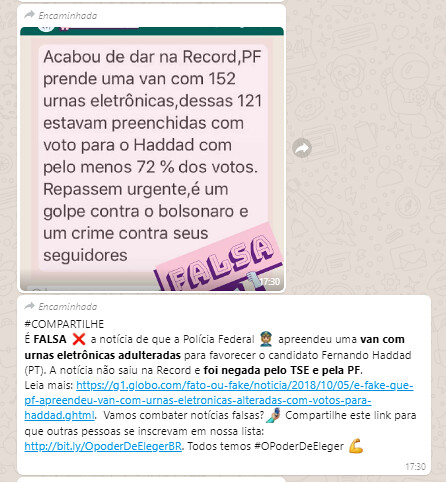 The project team is made up of five journalists and one designer in Brazil and one journalist and two designers in Colombia. Through the number +55 21 981405658 on WhatsApp, they receive suggestions and requests for checks related to the elections from users. The team checks and publishes it in formats designed specifically for the messaging application, such as GIFs, short videos and images, accompanied by a text that explains the context and provides links to more information.

Journalist Luiza Bandeira, one of the checkers and editors of El Poder de Eleger, told the Knight Center that they have some criteria for deciding what content to check. "We see if more than one person sent us that chain, if there is public and reliable information to verify it, because we do not want it to be an account of 'someone said that,' then we seek to do an independent check, and we also see circulation in others social networks to try to measure the reach of that message. We do not want to help spread something that has a very small reach."

Once the content has been checked, one of the people puts the information into GIF or video format, which, when approved by the editors is passed onto the design team, who assembles the piece and returns it to the journalists for the evaluation. The check is then sent by WhatsApp to around 400 people who have registered so far to receive content from the initiative.

The team receives between 10 and 12 requests for fact-checking per day, but has sent about three a week, due to the time to check and produce the pieces and to avoid flooding users with content. In addition to WhatsApp, checks are also available on the Chicas Poderosas site and on the initiative profiles on Facebook, Twitter and Instagram.

In addition to requests to check information sent by contacts on WhatsApp, many users have submitted questions about the voting process itself. "It was something that surprised us," Bandeira said. “We made pieces about election questions, because people were asking questions like 'what is the voting order?' or 'what happens if I vote blank or null?'. Then we also feel the lack of a channel for direct communication with people via WhatsApp whereby they can talk to someone and ask questions, and that can be thought about for the future."

Last Sunday, the day of the first round of the elections, the team stood ready to perform "express" checks, as Bandeira explained, who instead of GIF or video focused on image and text with clickable links. One exception was the video that became the most publicized rumor on the day of the vote and which suggested that the electronic ballot box was automatically completing number 13 of presidential candidate Fernando Haddad of the Workers' Party. For the check, they inserted graphics of the project into the video to report that an electoral court had said it was not true.

"We worry a lot about not replicating fake material, so we put the 'fake' thing in there very big and make it clear that we check it," she said. "Our idea is not to compete with the fact-checking agencies, which are doing the quick check of what is circulating. When we see that even after they do the checking people keep sending us that chain, we do our checking, giving another format to that and using another channel of distribution." 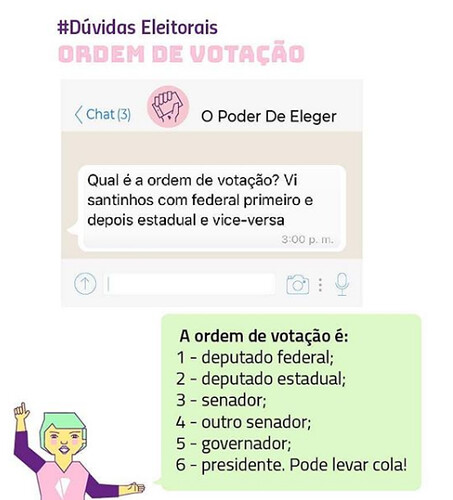 They also seek to include users in the checks they request, which, according to Bandeira, promotes the engagement and dissemination of content. "We realize that people like you to talk to them. We tried to reproduce the message that the person sent without naming them. We think this works in terms of engagement: the person sees that we are responding to her message. As we want the person to spread our content, that is important."

Many users respond to the checks or send messages to the team, the editor said. So far, there have been only neutral or positive comments. "People demand an answer: 'I sent this and you have not checked it yet'. This is cool, because there is active participation and demand from people for their content to be checked."

The day of the first round of voting was the most intense and they received messages like "wow, I imagine there is a lot for you to do there today, but how cool your work is," Bandeira said. "There’s something of a more personal contact. We do not respond to everything we receive, but we try to respond to most of it. So, because the user feels more valued, he really appreciates the work and says that. "

As it is a pioneering project in Brazil and works with WhatsApp, a tool that is beginning to be used by journalists, there is much to learn, Bandeira said. "It's all very new, and one thing we find very cool in the project is that we always learn from what's coming. With every check we make, we have a great learning experience and I think it's cool to share it with anyone who wants to work with WhatsApp."

The Brazilian team has the expertise of the Colombians who developed the El Poder de Elegir project, which operated during the last presidential elections in the country. From the experience in Colombia, "we were seeing how much it was necessary to adapt to the reality of Brazil, what works and what does not work in each country," she said. One of the differences, she pointed out, is the type of chain most often sent to checkers. "We get chains with lots of information and a lot of links where people mix traditional sources with sources that are not credible and that are hyperpartisan. That had not happened there. "

One of the main hurdles of journalistic work with WhatsApp is the lack of metrics: since it is an encrypted messaging application, it is not possible to measure the scope of the checks sent by the Poder de Eleger team. But by sharing in social networks they have been able to identify that the check they have made that has had the most impact so far is confirmation that presidential candidate Jair Bolsonaro of the Social Liberal Party (PSL) is a co-author of a bill that aims to change care for victims of sexual violence in the public health system.

"We will do a survey after [closing the project], even to collaborate in this debate about the role of WhatsApp in the dissemination of information, but we estimate that the reach is greater than that [of the people in the distribution list]," Bandeira said. The journalist's calculation is that the reach of informative content in WhatsApp is exponential: "if each person shares with two, they are 800; if they share with two, 1,600, and so on. And two is a conservative calculation, considering the groups that people are part of."

The project should remain active until the week following the second round, which will be held on Oct. 28.