Attacks on the media and journalists in Nicaragua during 2021 almost reached 2018 levels, the year in which the resurgence of repressive actions by the government of President Daniel Ortega against communicators and opponents began.

In 2021, 702 cases of abuse of power and violence against the press by the State were registered, which is almost double the 360 reported in 2020. In 2018, 712 of these incidents were registered. This, according to the "Report on Violations of Press Freedom 2021" prepared by the newspaper La Prensa and the organization Voces del Sur. 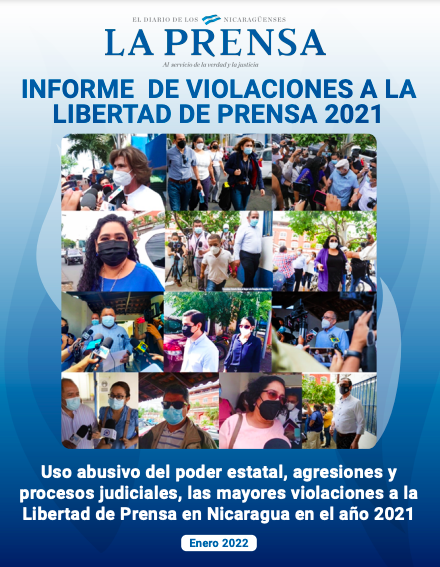 The report was carried out by La Prensa and by the organization Voces del Sur. (Photo: Screenshot)

In the list of victims of State violence, independent media is in first place, with 469 incidents. This is followed by individual attacks on journalists, with 124 cases; and to editors, directors and media executives, with 76 cases.

Among the cases of aggression against the media cited by the report is the raid and police occupation of La Prensa, which occurred on Aug. 13, as well as the search without warrant of the Confidencial digital media outlet, on May 20.

In February 2021, officials of the Daniel Ortega regime confiscated the facilities of the 100% Noticias channel and the newsrooms of the Confidencial portal and Niú Magazine.

The report also mentions the case of when the GeneralCustoms Office put a halt to importing paper, which forced the newspaper La Prensa, in 2021, to transition to 100 percent online distribution, due to lack of supplies. Since August, Nicaragua is the only country in the Americas where no printed newspapers exist.

“The abusive use of state power is carried out through actions proposed, planned and executed by the State, which, abusing its superstructural condition, imposes itself with the force of irrationality against international standards of Freedom of the Press and Expression, sometimes irreparably harming the media and independent journalists who legitimately carry out their work of monitoring public institutions,” the report stated.

The organization Voces del Sur considers the abusive use of state power to be actions aimed at the financial suffocation of the media, the exclusion of state advertising plans, the threat or cancellation of radio frequencies, and unjustified administrative and economic sanctions.

“During 2021, it was documented that at least 22 local radio newscasts disappeared for various reasons, including: change of editorial line of the media outlet and lack of sponsorship. In addition, some opinion programs were removed from radio programming, forced by the hostile context the country is experiencing,” according to the document.

Regarding individual attacks on communicators and press workers in 2021, the report registered 171 incidents, of which 37 percent were against women and 63 percent against men.

The report highlights the case of the arbitrary arrest of the general manager of La Prensa, Juan Lorenzo Holmann Chamorro, in August, as well as that of Pedro Joaquín Chamorro Barrios, former director and writer of La Prensa, who has been in prison since June 25. 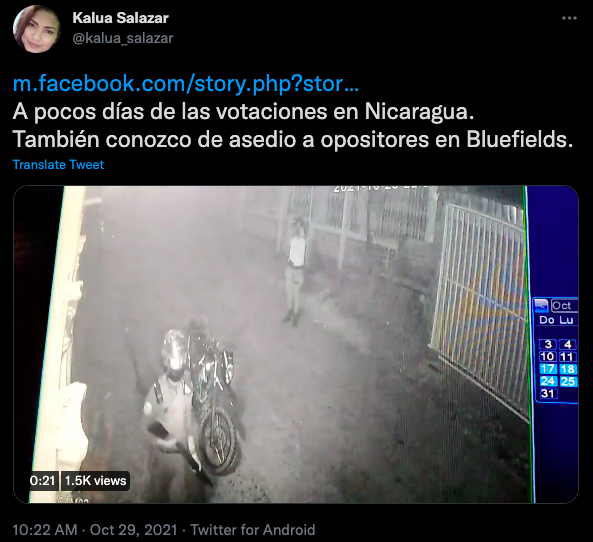 Journalist Kalúa Salazar has suffered a judicial siege with police agents outside her home. (Photo: Twitter)

The director of the Confidencial media outlet, Carlos Fernando Chamorro Barrios, was accused of laundering money, goods and assets, and of improper appropriation and retention, and abusive management, which forced him into exile in June.

The report also highlights the police siege against radio journalist Kalúa Salazar, described as "constant and disproportionate." There is also a slander lawsuit filed against Salazar by officials from the Mayor's Office of El Rama, in southeastern Nicaragua.

Although the report states that after September 2021 there have been no known new prosecutions by the Public Ministry against journalists, repressive actions continue in other forms.

"The state apparatus has modified its mechanisms of oppression in order to silence the critical voices denouncing violations of fundamental rights committed in the country," according to the document.

Among the types of non-judicial violence or abuse of power considered in the report are physical aggression (with 291 cases of the 702 total), restrictions on access to information (with 19), stigmatizing discourse (with 18), intersectional gender violence (with 2) and Internet restrictions and kidnapping (with one case each).

In addition, several communicators suffered the withholding of their passports in the past year. Such was the case of journalist Julio López, head of information for Onda Local, a digital media outlet critical of the regime, who was stripped of his identity document on June 21, as he was preparing to travel to Costa Rica by land. Similarly, Mauricio Madrigal, press officer for Channel 10, was prevented from boarding a plane that would take him to Miami on Sept. 29 and his passport was taken away.

​​According to the report, the vast majority of attacks on the media and journalists have been recorded in the country's capital, Managua, with 592 of the 702 (84.30 percent). It is followed by the Autonomous Region of the South Caribbean Coast, with 45 registered cases (6.41 percent) and the city of León, where 22 attacks occurred (3.13 percent). 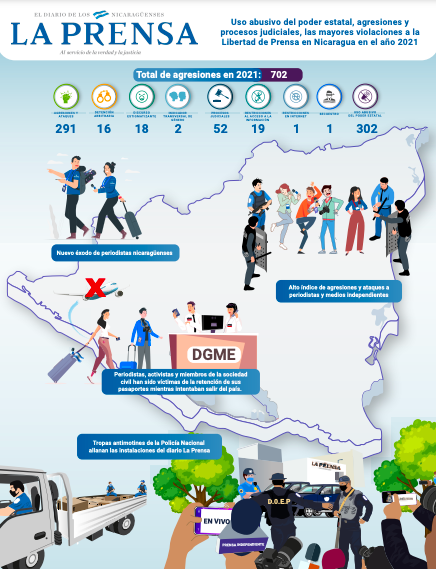 The types of violence against journalists by the Ortega regime range from arbitrary arrests to confiscation of passports. (Photo: Screenshot)

The report graphs show that the second half of 2021 was the period with the greatest violence against press freedom. November—when presidential elections were held—was the month with the most registered cases, with 128. In October there were 107, in December, 105; in September, 104; and in August, 80.

On Nov. 7, the Organization of American States (OAS) ruled that the Nov. 7 elections "were not free, fair or transparent" and warned of the harassment of the media by the repressive forces of the Government in the context of the elections.

"The electoral process of Nov. 7 was no exception. The siege, intimidation, obstructions and specifically the blocking of journalistic work continued," the organization stated in its resolution of Friday, Nov. 12.

The report by Voces del Sur also stated that Nicaraguan immigration authorities prevented at least 5 international journalistic teams, who aimed to cover the presidential elections, from entering the country.

“The socio-political situation in which the country finds itself immersed, even more so as of April 2018, is extremely worrying. At the end of 2021 there are no signs that the policy of hostility against the media and independent journalists will stop,” the document concluded.