After receiving two death threats on social media in the last six months, Peruvian investigative journalist Paola Ugaz recently learned that the public prosecutor will not open an investigation in either case. The journalist is also the target of another legal case in a string of lawsuits following her investigation into the Sodalitium Christianae Vitae, a lay group of the Catholic Church founded in Peru. 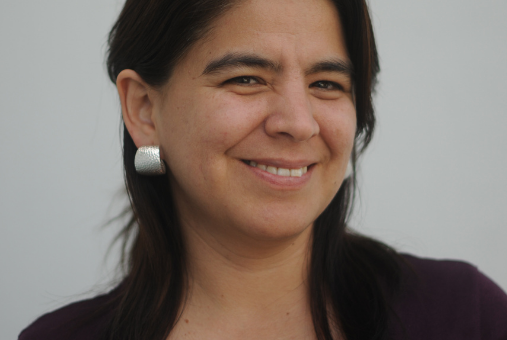 On March 24, 2021, a Twitter user called her a criminal and said that she should be “shot in the Plaza San Martín” for laundering money. The user has 15 followers, one of them being the current candidate for the presidency of Peru, Rafael López Aliaga.

In October 2020, through Instagram, a subject called her a retrograde leftist and told her that they were going to fumigate all the Reds, threatening that the Peruvian version of the terrorist attack on French satirical magazine Charlie Hebdo was coming. 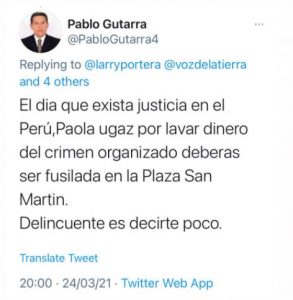 Tweet of the recent dead threat against Paola Ugaz.

In an interview with LJR, Ugaz said she is also the target of another legal case, this time for alleged money laundering and illicit enrichment. In late January 2021, the special prosecution team investigating corruption cases of officials in the regional Lava Jato scandal accepted a complaint from Luciano Revoredo, director of the conservative website La Abeja, and began an investigation into the journalist.

Revoredo’s complaint came after publications from Expreso, Willax TV, La Abeja and La Razón reported that Ugaz allegedly became rich after working in the Municipality of Lima when Susana Villarán was mayor. Villarán, who is in preventive detention, is also being investigated by the special prosecution team that hears the Lava Jato case, for the alleged crime of illicit enrichment.

LJR attempted to contact the special prosecution team in charge of the Ugaz investigation, but received no response before publication of this article.

In 2013, "I worked as an associate of municipal management in communications, an associate among more than 150 people," Ugaz said in her defense.

“Because of my expertise in social media, I created the social media area within Communications. In other words, I manage some social media so they called me,” Ugaz said. “They called me [from the Municipality] to improve communications on that side, because they knew they were not doing well, being in a full recall campaign [for Villarán]. But it was based on my professional expertise, I never handled any money.”

Willax TV journalist Phillip Butters told LJR that Ugaz has never wanted to give him an interview about the alleged case of illicit enrichment and money laundering.

“Unfortunately, Mrs. Ugaz does not assume her responsibility, and it would be fabulous if she gave us an interview with all the assurances and safety of the case, wherever she wants, at the time she wants and under the conditions she wants. Obviously the interview is recorded and the questions are asked and she has to answer. But no, Mrs. Ugaz only makes statements in places where no one cross-examines her.”

For her part, Ugaz said that the Butters program “never” asked her for an interview to give her defense.

Butters reiterated that "Mrs. [Ugaz] is not subject to any type of media harassment, not journalistic, nor judicial nor prosecutorial.”

This is the second complaint from Revoredo, of La Abeja, targeting Ugaz. In 2020, Revoredo sued her based on public interviews in which she said that his website was defamatory. The case is ongoing.

In several of its editorials, La Abeja mentions Ugaz. One of these alludes to the book Ugaz published with journalist Pedro Salinas in 2015, "Half monks, half soldiers." This book gathers testimonies about sexual abuse of minors allegedly committed years ago by members of the Sodalitium.

According to Ugaz's lawyer, since 2018, La Abeja has undertaken a “demolition and attack campaign” against the journalist, after she was denounced by the Archbishop of Piura, José Antonio Eguren.

In 2018, the archbishop sued her for aggravated defamation. Eguren, from the Sodalitium Christianae Vitae, sued her for a series of tweets she posted when Pope Francis visited Peru and because of an Al Jazeera documentary about the commercial activities of the Sodalitium in which Ugaz participated. The lawsuit was withdrawn by the priest months later.

That same year and also as a result of the documentary, then-general manager of Inmobiliaria Miraflores Perú, Carlos Gómez de la Torre, denounced Ugaz for defamation. Ugaz previously said the real estate company is linked to the Sodalitium. The case is still ongoing and no sentence has been handed down, according to the journalist's lawyer.

Revoredo has denied that his suit against Ugaz was due to her investigations into the Sodalitium.

Ugaz said the judicial harassment she has experienced in recent years is even more cutting because she is a woman. However, her best strategy in this situation, she pointed out, is her journalistic career.

“I am specialized in forming teams and putting together digital newsrooms… I have been the general editor of the blog la Mula when it won its awards in 2011, I have been the founder of IDL-Reporteros. My strategy is my professional resume,” Ugaz said.