‘This recognition is an antidote against the disqualifications and aggressions that we Mexican journalists face’: Javier Garza Ramos, 2022 Maria Moors Cabot Special Citation

Mexican journalist Javier Garza Ramos is married to journalism. For Garza Ramos, who has been in the profession for more than 25 years, his vocation remains firm in good times and bad.

And yes, there have been bad times. During his time as editor-in-chief of El Siglo de Torreón, in northern Mexico, he and his team were attacked by violent groups. In addition to facing the adverse circumstances of working in a country considered by Reporters without Borders as the most dangerous for journalism.

However, despite the ups and downs, Garza Ramos believes that more time is spent on top of the hill than in the abyss. An example of a good moment happened this past Oct. 11, when the Mexican journalist received the 2022 Maria Moors Cabot Special Citation at a ceremony in New York City.

"When recognitions like the Cabot or others point to my country, it's a way of saying that quality journalism is being done in Mexico," Garza Ramos told LatAm Journalism Review (LJR). "It is an antidote against the disqualifications and aggressions that we journalists face because we know there are people who are taking notice of our work and who value it," he said.

More than 20 Mexican journalists have received awards in the history of this prize. Garza Ramos confessed that the María Moors Cabot Prize was one of the first journalism awards he knew about in his early days as a journalist and that he once thought 'I’d like to be one of the winners.' So, when he received the phone call informing him of the decision, he reacted with great joy.

"It was thrilling to hear the news. Just as I’ve been happy when other Mexican journalists, who are friends of mine and whom I really care for, have won. It’s an award that is shared among many journalists...The Cabot not only rewards journalistic excellence, but also recognizes those who do it under adverse circumstances," he said.

The Moors Cabot jury highlighted his commitment to inform and serve society as well as his fight for the safety of journalists in Mexico and the rest of the world. 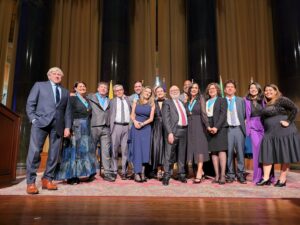 “In these difficult times when independent journalism is under attack in Mexico and many other countries in the Americas, the Cabot Board honors Javier Garza Ramos with a 2022 Maria Moors Cabot Special Citation as an enduring example of intrepid reporting, and commitment to his colleagues in the face of adversity,” said the jury in a statement.

Quality journalism despite the risks

Garza Ramos is a local journalist. That is, he does not work from Mexico's capital but from Torreón, a city located in northeastern Mexico. He is currently co-host of Expansión Daily, one of the most popular news podcasts in that country, and founder of the local news platform EnRe2Laguna.

For Garza Ramos, journalism in Latin America is innovative and of high quality, despite the limited resources that are often available.

"Latin America has managed to establish investigative journalism projects, accountability, transparency, has combated disinformation and created digital media that can be on equal footing with anyone else," Garza Ramos said. "Something that has always characterized Latin America, I believe, is that it produces journalists who do great work," he added.

Garza Ramos is an expert in security. He has given conferences and workshops on security, press freedom and media development in several countries around the world. Part of his experience in this area was gained while he was managing the editorial office of El Siglo de Torreón, in the state of Coahuila. During those years, the newspaper's headquarters were under siege by drug cartels operating in the city. They were attacked on several occasions and five newspaper workers were kidnapped in 2013.

Garza Ramos admits that no measures absolutely guarantee that no attack will take place, but he says measures can be taken to mitigate the risk.

"I insist, when I give workshops in newsrooms, on applying something I’ve called 'editorial security.' That is, how to think about the news before publishing it, so that you can really make an assessment of the risks you’d take if you publish it. Not so you can self-censor, but so that you can make calculations and take certain precautions," Garza Ramos said.

For the journalist, making this assessment allowed El Siglo de Torreón to calculate, in some way, the impact of the publication and to feel safer. Garza Ramos also emphasizes security during reporting to ensure that no one finds out about the investigation before it is published. "Although this is not necessarily the solution. The solution is always going to be strengthening the rule of law so that impunity for crimes ends. The only thing that will really prevent a journalist from being killed is that the last person to do it receives the full weight of the law."

Journalistic ego in its rightful measure

Javier Garza Ramos currently works as a freelance journalist. He has written for media outlets such as El País, El Washington Post and at the end of 2020 he published the book "Nueve Disparos," a story on a school shooting that took place in the city of Torreón, Coahuila in January 2020. Garza Ramos has been considered by many as a story hunter.

"When a journalist is chasing a story, it's an experience where you forget about anything else. When you are reporting it, when you are chasing it, when you are getting it little by little and every day you are publishing the details of what you just found out... I really believe that is why journalism is worth doing and being," Ramos Garza said.

Pursuing a story, even a painful or tragic one, gives Garza Ramos a sense of meaning and purpose. For him, hunting stories is following his vocation. "I've always said that if you don't do it, others will. And you're going to be watching from the sidelines and saying: I could’ve done it better or I would’ve done it differently," he said.

Garza Ramos was then asked about one of the evils of journalism: ego. And he pondered on to what point it was necessary and when it could become a threat.

"It feels good when a journalist, especially someone you admire, tells you 'that's a very good story you just published'. However, when the ego becomes so big as to lead you to say that you are more important than the news or that you are more important than the news outlet in which you work, then it’s a problem," Garza Ramos said. "It's a double-edged sword when you start to buy into your own story or your own myth...Without a story, a journalist amounts to nothing. Anyone can have opinions, but not anyone can really pursue and tell a story."