When the bombing of Kiev intensified during the early days of the Russian invasion of Ukraine, Argentine journalist Sol Macaluso had to leave the city with her colleagues. For five days, she traveled across the Eastern European country until she arrived in Lviv, a city close to the Polish border. On the way, she was helped by Ukrainian civilians.

“Their solidarity impressed me the most. We stopped in the houses of many Ukrainian families that didn't know us at all, but our fixers asked them to host us and they all receive us with such a heartwarming feeling. It's just insane how their country was under attack and they were still being kind," she told LatAm Journalism Review (LJR).

The way in which Ukrainians reacted to such a serious situation, facing bombings, hunger and fear, also caught the attention of Chilean Mariana Díaz. “The suffering of the people, the uncertainty, the cold…all were experiences at the limit of endurance. I was amazed at how strong they remained, despite their world falling apart.”

Brazilian Yan Boechat, on the other hand, was surprised by Kiev's unpreparedness for the intensity of the war that hit the Ukrainian capital. In addition, the journalist points out that the conflict is gaining more international prominence because it takes place in Europe and it affects European civilians. “This has a big impact on Western public opinion. I was in the Ethiopian war, where a lot of people died, but nobody wanted to know about that conflict,” he said.

Bringing analyzes like these and information gathered on the ground to audiences around the world are crucial tasks of journalists' work in conflict areas. Even more challenging is fulfilling these obligations in a hostile environment, seeking to obtain accurate data and evading official narratives.

In this context, Diaz, Boechat, and Macaluso, journalists from three South American countries and with different types of professional experience, told LJR about the challenges they faced on the front line while covering the war in Ukraine, which has already forced 3 million people to flee the country, according to the UN. 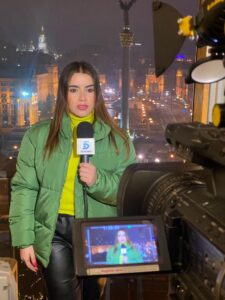 Covering the war in Ukraine is the first major event in Macaluso’s career, who graduated in journalism in Buenos Aires in early 2020. Shortly after, she moved to Spain, where she started to work as a correspondent for Argentine TV channels and as a freelancer for the production company Quality Producciones — the company that sent her to Ukraine in January of this year.

“I thought it was a great opportunity to get involved with the situation and gain experience. I was aware that a war could happen, but of course the theory and the expectation were different from the reality we live in now,” she said.

In the midst of the conflict, each day brings new challenges for Macaluso, who has quickly learned to deal with the different demands of the TV channels that hire her. “Each broadcaster wants a [different] form of communication and has different schedules. So it requires me a certain amount of time to prepare and deliver what they each ask of me.” 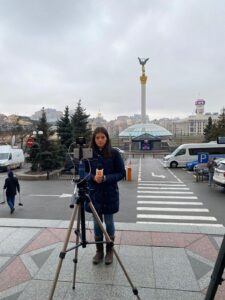 While, at 37, Diaz already had plenty of experience with challenging coverage. The Chilean journalist, who graduated in 2010 from La Sapienza University in Rome, where she has lived since 2003, has covered earthquakes, natural disasters and terrorist attacks. Still, being in a full-scale war was a novelty.

During her career, Díaz worked as a presenter and journalist for the Italian TV channel Babel tv and for the geopolitical magazine LookOut News. In Chile, she was a freelancer for La Tercera, Adn Radio, Revista Caras, and is currently a correspondent for Canal 13.

Díaz stayed in Ukraine for three weeks and was in the country on two occasions. The first took place in late January 2021, when the conflict was still confined to the Donbass region. Her second stint took place in Kiev on February 23.

“I arrived by plane, with one of the last flights before they closed their airspace. I was staying in Maidan square, but after the bombing the hotel staff left. I had to move to a safer structure, staying in a shelter in the Podil area, still in the capital,” she said.

In Ukraine, Díaz worked for Channel 13, as well as some radio stations and newspapers. “The most complicated thing was working for television, as this implies immediacy and image elaboration, two elements that are difficult to reconcile in a war territory. Going out on the street to record was risky, mainly because I didn't have the protection of a bulletproof vest or a helmet and the internet connection often failed.”

One more stint in Ukraine 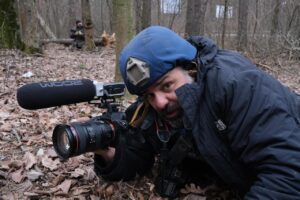 Boechat, who has worked in conflict areas such as Syria and Iraq, is on his fifth stint in Ukraine. The Brazilian journalist arrived in the country by plane shortly before the war started, but he had already covered the civil war in the eastern part of the country. “The precautions I took were the usual ones: be careful and wear safety equipment,” he said.

In recent weeks, Boechat has been to Donbass, Kharkiv, Kiev, among other areas. The journalist has worked as a freelancer for Voice of America, TV Bandeirantes and the newspaper O Globo (the last two are Brazilian news outlets).

During his current coverage, his fixer in Kiev fled in the early days of the war, taking safety equipment with her. After that, Boechat had to leave the Ukrainian capital until he could get another vest and a helmet. But even taking these precautions, he said, the situation is "random, especially regarding artillery" [...] “If you are experiencing bombing, the ideal is to seek shelter. A place where you can protect yourself and keep your head covered. If you can’t find it, lie on the floor,” he advises.

Macaluso had to learn in the field how to protect herself. She has a helmet, but she hasn't had to wear it yet because she's not on the front lines constantly. “But it's difficult because this equipment doesn't protect you from bombings. And some colleagues have died because of that in the last few days.”

According to the NGO Committee to Protect Journalists, at least four journalists died in 2022 while covering the war. Among them are TIME's Brent Renaud and Fox News' camera operator Pierre Zakrzewski.

Difficulties in the field

A dangerous environment is not the only obstacle and challenge for journalists in Ukraine. The logistics of coverage have been very complex, Boechatn said. Trains still run in parts of the country, but he had to find a private driver.

On the other hand, the driver doesn't speak English or Russian. They communicate via Google Translate. The driver also lacks conflict experience and safety gear. “A few days ago, we were heavily bombed in an open area in the middle of the bush, where we had no place to hide. The driver didn't pick us up. A colleague of his came to carry out our evacuation,” Boechat said.

To avoid technical problems, Boechat brought three cameras, three microphones and two recorders. “I do everything here: video, interviews, logistics, image processing, photography, writing for newspapers and television. I am the cause and consequence of the impoverishment of journalism. I have no pride in being cross-platform,” he said.

Macaluso said the challenges include the pressure of working more than 12 hours a day. In addition, the visibility she gained during the conflict has earned her online criticism, which she has tried to ignore to focus on improving herself. “It's been hard, but I'm doing my best. And if TV companies are calling me, it must be for a reason. I still hope to improve and accomplish everything my clients ask of me.”

Back at her base in Rome, Díaz believes her experience in Ukraine made her notice her own adaptability, physical stamina, and the mental calm she had to maintain in a complex and constantly tense situation. And that helped her play a role she considers fundamental in this war: reporting objectively and bringing reliable information to the public.

“It is through on-site journalists that we can keep the pulse of the situation. They are the ones who tell the rest of the world what is happening on city streets. Whether there is food, water, bombing, how many, how, where. They also maintain close contact with the local population,” she said.

Boechat adds that journalists at war "are always seen as an instrument of propaganda, regardless of the side," but Ukraine has guaranteed access to communication professionals — even if it’s to show itself being attacked. “If we have access, we can tell things without bias. We sketch out a story, more or less, although it’s very fragile. We manage to escape the official discourse pure and simple, but at the same time we have access to where the Ukrainians want us to have access.”