U.S. State Department report on human rights and press freedom around the world draws ire of some Latin American leaders

Governments of several Latin American countries have struck back after the U.S. State Department released its report on human rights practices around the world, including comments regarding freedoms of expression and of the press. However, the annual reports, which are now in their 45th edition, are welcomed by press freedom and journalism groups in nations critiqued for attacks and restrictions on journalists. 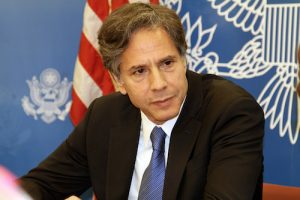 The 2020 Country Reports on Human Rights Practices, released by the U.S. State Department on March 30, cite human rights and watchdog organizations, as well as media outlets, in the countries covered, and are compiled by state department employees around the world.

“President Biden has committed to putting human rights back at the center of American foreign policy, and that’s a commitment that I and the entire Department of State take very seriously,” Blinken said at a press conference held for the release of the reports.

Heading off any rebuttal from those mentioned in these reports, the secretary acknowledged that the U.S. knows it has “work to do at home,” including “addressing profound inequities.”

The report is a “strong wake-up call to governments of the region,” Carlos Jornet, president of the Freedom of the Press and Information Commission of the Inter American Press Association (IAPA), told LatAm Journalism Review (LJR).

“In the case of the 2020 report, the three countries that showed the worst standards in the first edition of our Chapultepec Index of Freedom of Expression and Press (Venezuela, Cuba and Nicaragua) are precisely the three that the executive summary of the report mentioned with concern,” he said.

However, he added that the IAPA also noted a worrying deterioration of freedom of expression and of the press in the U.S. in 2020.

“And that may give rise to authoritarian governments on the continent to discredit some of the allegations made in the report,” Jornet said.

While the reports themselves contain little commentary, aside from inclusion or exclusion of certain facts or events, leaders from Latin American countries mentioned in the reports or by Blinken in his presentation of the documents have spoken out.

“To begin with, we do not interfere to comment on human rights violations in the United States; we are respectful,” Mexican President Andres Manuel López Obrador said at one of his daily morning press conferences, as reported by La Jornada. “We cannot comment on what is happening in another country, so why does the United States government have an opinion on issues that only concern Mexicans?”

The State Department report called attention to high levels of violence against journalists in Mexico, widely considered one of the deadliest countries in the world for journalists. It also noted that despite the existence of a federal protection mechanism for the press, journalists under its care have been killed. It also highlighted the power of government advertising over media outlets in the country, and said certain politicians publicly criticize and discredit journalists.

The state department also cited a Freedom House report that said there are social media campaigns from political partisans against journalists who criticize the president’s press conferences.

Tribute to journalists killed in Mexico

In response, López Obrador defended Martínez as facing groups with “vested interests,” and accused Article 19 of being financed by foreign companies, “even by the State Department.” He also said the country “does not censor anyone.”

Article 19 said the president’s comments were an attempt to draw media attention away from his failure to protect journalists.

“We believe the president’s position only seeks to discredit the entity by invoking principles of non-interference or sovereignty and financing, which contravenes universal principles on human rights, instead of investigating the substance of the matter, which is the existence of an adverse climate for press freedom in the country,” Jornet, from the IAPA, told LJR. “A climate whose maximum expression is assassinations, threats to media and journalists, and impunity for these crimes, but which also translates into pressure, disqualification and a lack of transparency from the highest levels of political power.”

Jornet added that discrediting the credibility of human rights organizations because of their investigation of facts or financing “has been used for years by governments that do not like criticism or supervision of human rights at the international level.”

In the written preface to the reports, two other Latin American countries were singled out by Blinken: Nicaragua and Cuba.

The report itself flatly said the Nicaraguan government did not respect freedom of expression and of the press.

“Restrictions on press freedom, the absence of an independent judiciary, and a nondemocratic political system combined to inhibit freedom of expression, including for the press.”

It catalogued government attacks including restrictions on printing and broadcasting infrastructure, blocking access to information and sources, legal cases against communicators, and even violence against journalists.

Ileana Lacayo, member of the executive commission of the Independent Journalists and Communicators of Nicaragua (PCIN, for its acronym in Spanish), said the organization believes the U.S. government can support the protection of journalists and communicators in the country. 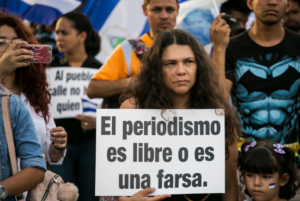 A photo from a tribute to journalist Angel Gahona who was killed in Bluefields on April 21, 2018. (Photo: Jorge Mejía Peralta/CC BY 2.0)

“The Nicaraguan government, the Ortega regime, has put the figure of the United States government as the ghost behind all the protests. Of course, this direct formal relationship can affect us in that the government takes it as a measure to criminalize journalists, communicators and the media with these new laws,” Lacayo told LJR. “However, we believe that there is a way to support, above all, a system of protection for journalists and communicators who have been attacked, besieged, criminalized and attacked physically and psychologically and even sexually. We believe that the United States can contribute, as can other countries.”

The PCIN Observatory of Aggressions to Independent Press Freedom in Nicaragua recorded 943 violations to human rights and complaints from 66 journalists and communicators for violent acts and obstacles to their work just between July 15 and Dec. 15, 2020.

Secretary Blinken also highlighted Cuba in the preface to the country reports.

“Meanwhile in Cuba, government restrictions continued to suppress the freedoms of expression, association, religion or belief, and movement,” he wrote.

Following the report’s release, Cuban President Miguel Díaz-Canel Tweeted, “Another undignified, immoral and deceitful accusation of the US State Department against #Cuba. They resort to their usual infamous rhetoric to slander a heroic island which suffers the criminal blockade of the US government, causing great damage to the Cuban people.”

As noted by the State Department report, the government and Communist Party of Cuba own all print and broadcast outlets, creating a near monopoly on available information. While foreign correspondents had limited access to government officials or information, independent journalists were harassed, detained, intimidated and subject to other abuse, the report said.

When asked about the report, José Antonio Fornaris, president of the Cuban Association for Freedom of the Press (APLP), recalled a public letter the organization sent to former U.S. President Barack Obama in 2016.

“One of the paragraphs of that letter stated: ‘President, the Association for Freedom of the Press, requests that in the negotiations that the United States government holds with the island's authorities, directly influence the Cuban government to ratify the international covenants on civil and political rights that guarantee the freedom of expression and of the press and stop the harassment of the independent press,’” Fornaris told LJR. “Our message to Secretary of State Antony Blinken is that we keep the core of that request. We wish for the current U.S. government to stand firm against the violation of human rights in Cuba and support the work in favor of freedom of the press in the Greater Antilles.”

Normando Hernández, director general of the Cuban Institute for Freedom of Expression and of the Press, welcomed the report, but critiqued that it should have gone into further detail into the use of Law Decree 370, also known as Ley Azote, to silence critical voices.

“Let us not forget that decree Law 370 is unconstitutional and that during 2020, 32 people were fined by the Ley Azote and that many of them can go to prison for refusing to pay the fine because they are convinced that expressing themselves on social networks is not crime,” he told LJR.

The State Department report mentioned journalist Camila Acosta, who has been detained, fined and forced to move several times because of her reporting. One of those fines came after police discovered masks printed with “No al 370,” regarding the law that penalizes opinion published on social networks and digital platforms. 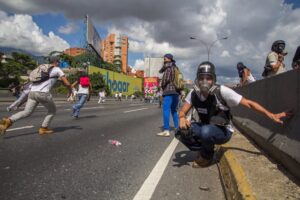 Photo of journalist Rafael Hernández during a protest in Venezuela.

In his statements during the release of the report, Blinken called out Venezuela and its treatment of the independent press.

“The report we’re releasing today shows that the trend lines on human rights continue to move in the wrong direction. We see evidence that in every region of the world this is happening,” he said. “We see it in... the attacks on and the imprisonment of opposition politicians, anti-corruption activists, and independent journalists in places like Russia, Uganda, Venezuela.”

The country report on Venezuela said freedoms of expression and of the press are repressed by defamation laws, legal harassment, physical intimidation of journalists and media, and executive influence over the judicial system.

“When the challenges for the independent press are highlighted, it obviously helps because it is a demonstration that the current situation is being handled with clarity and generates greater visibility to the Venezuelan case,” Edgar Cárdenas, secretary general of the Caracas section of the National Association of Journalists (CNP), told LJR. “But it also causes an increase in aggressions against journalists and media by the Maduro government, the most affected being the press workers, who are handicapped in the face of the government power that executes direct and indirect actions to prevent the free exercise of journalistic work, even endangering the physical condition of journalists and their families.”

You can find more detailed information about most countries in Latin America and the Caribbean mentioned by the U.S. State Department in this custom report built by LJR.