The diversity, equity and inclusion (DEI) approach, increasingly adopted by newsrooms around the world, is best known for the racial and gender perspectives in content production and team training. Attention to people with disabilities is not always taken into consideration. The Brazilian project “Journalistic accessibility: a problem that no one sees,” addressed the demands of visually impaired people in order to improve their access to quality information. It surveyed people who are blind or have low vision and analyzed 21 journalistic websites. The results were published in a report, and Lume was created, an application that curates journalistic content aimed at people with visual impairments.

Carolina Monteiro, project coordinator, told LatAm Journalism Review (LJR) that one of the intentions of the initiative is precisely to broaden the understanding of inclusion and diversity in journalism. “Diversity in journalism is understood basically as an issue of gender and race, which is a fundamental, urgent and priority debate in Brazil, but it is not the only form of diversity. There is very little talk about the inclusion of people with disabilities in general in the consumption of quality journalistic content. We want to raise awareness of this debate, to broaden the discussion about diversity in journalism, and about diversity and inclusion in general,” she said. 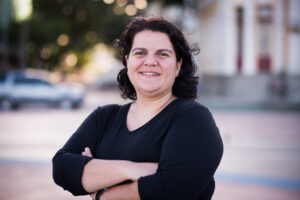 Monteiro is also the co-founder of Marco Zero Conteúdo and director of the School of Communication at the Catholic University of Pernambuco (Unicap). Marco Zero is one of nine independent media that make up the project's network, which also includes Olhos Jornalismo, Agência Saiba Mais, Agência Diadorim, Newsletter Cajueira, Eco Nordeste, Agência Retruco, Revista Afirmativa and Mídia Caeté, together with the Unicap.

The initiative emerged as a project by journalist Mariana Clarissa as part of her master's degree in Creative Industries at Unicap, which is also part of the network responsible for the “Journalistic Accessibility.”

However, after identifying several independent news outlets dedicated to racial issues in Brazil, Clarissa sought another focus for her project. She works at a state agency and one of her managers, who is blind, commented on the lack of accessibility of government websites for people with visual impairments. Clarissa asked him about the accessibility of news sites and how he went about finding news. 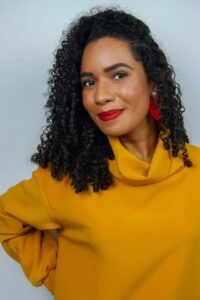 “And then, during our conversation, he talked about how difficult it was, the issues [in accessing news online]. I also saw that this subject wasn't discussed, it wasn't very in-depth, it wasn't very researched, and few people were talking about digital accessibility and assistive technology focused on journalism,” she said.

Based on Clarissa's research in her master's degree, the project's network was formed, which enrolled her in the 2021 edition of the Google News Initiative's Innovation Challenge. The initiative was selected and funded by the technology company.

According to the project report, the 2010 Census identified more than 6.5 million people who are blind or have low vision in Brazil, which means that visual impairment is the disability affecting the largest number of Brazilians. To understand the habits and demands of this population group in relation to the consumption of journalistic content, the project carried out interviews with 16 blind or low vision people. The full results of this qualitative research are available in the report.

All the people interviewed said the cell phone is the most used tool to access news and social networks. Even those who said they seek information through traditional means, such as television and radio, stressed that they consume news via the internet. Only three of the respondents said they access news directly from news outlets. Of the 16 respondents, 12 said they receive links through WhatsApp or participate in information-sharing groups on Telegram.

All said they use screen-reading applications to access journalistic content on their cell phones. These applications “read” and reproduce in audio the text that appears on the cell phone screen. In the case of images, the application reads the alternative text or alt text, the description of the image that must be manually entered by those who upload the images in the website's content manager. Videos must have a built-in audio description so that people with visual impairments can access the content presented.

Based on the interviews, the project compiled a series of recommendations for news organizations to increase the accessibility of their websites, including:

Among the recommendations related to journalistic production and the internal policies of organizations, are:

The insights offered by the people interviewed were used in the development of the Lume mobile application, a news aggregator with an interface that facilitates reading for people with visual impairments. At the moment, the aggregator is only available for Android and is fed with all the content published by the nine media that make up the project's network. The goal is to provide quality journalistic content in an accessible way to people who are blind or have low vision.

“Lume meets all accessibility criteria defined by international protocols,” Monteiro said. “It excludes noise and problems present in the code of the source sites that make it difficult for a screen reader application to read.”

One of the project's consultants is communicator Michel Platini, who is an advertising and accessibility consultant. “We have a motto in the movement of people with disabilities which is 'nothing about us without us.' So it's more than fair that a project like this had a visually impaired person who is also a communication professional,” he told LJR.

According to Platini, the Lume application permits “in a few clicks, to have access to read the complete news.” “No need to face cookies or popups, that is, screen overlay; no need to face ads and all. (...) When a person comes across a tool that is easy to use, they will use it for longer and recommend it to other people. When we are faced with a tool that we consider as difficult, there is a feeling of frustration, and we give up, we don't try anymore. So an accessible app even helps the mental health of those who want to be informed,” he said. 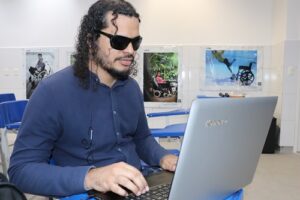 The project also carried out a survey on the relationship between journalistic organizations and accessibility in which 53 organizations participated, represented by people in management, editing and reporting positions.

Almost all respondents – 98% – said they do not have blind or low vision people in their teams, and 60% said they do not produce content with the accessibility requirements necessary for the visually impaired.

Asked about the level of knowledge about the techniques that contribute to ensuring accessibility on journalism websites, 71.7% of the respondents said they had little or no knowledge about such techniques, and 13.2% said they had no knowledge. In addition, most organizations – 80.4% – have never made a diagnosis of the accessibility level of their website, newsletter or podcast.

The project also carried out an analysis of the accessibility of Brazilian journalistic websites for people with visual impairments. Twenty-one sites were analyzed, including the nine media of the project's network and another 12 sites chosen based on the Reuters Institute's Digital News Report 2021 ranking, which listed the most accessed news outlets in Brazil last year.

The analysis concluded that none of the 21 sites fully meet the most basic accessibility criteria. The most contemplated item was the naming of all buttons and links on the pages, present in 95% of the sites. The description of images, something relatively simple to implement, is absent in 90% of the sites. The portals that most met the accessibility criteria analyzed were Jornal Extra (77% of the criteria met) and Marco Zero Conteúdo, Yahoo!News and MSN News (54%).

According to Carolina Monteiro, until getting involved in the “Journalistic Accessibility” project, Marco Zero was in a situation similar to what most journalistic organizations reported in the survey. “We were aware of the importance of accessibility and that this was a relevant subject, but had very little technical knowledge about how to implement accessibility on our site. We thought the solutions were expensive. And we lived in this impasse between knowing that it was an important subject, but at the same time not prioritizing it,” she said.

After their experience in the project, Marco Zero is now “in the process of changing.” “We are beginning to understand the impact and needs that this project is bringing to our daily lives. We thought of including more guidelines in the production of our content to meet the wishes and demands that were pointed out in the survey [with blind or low vision people]. And, we also want to implement more accessibility features to make the site even more accessible,” he said.

“It doesn't do much good to stick to techniques and develop something that is functional; the ideal is that those who participate in a project like this change their perspective,” Platini said. “[That they] change their perspective to the world. Whether on your social network, describing images; whether in your daily life, using correct terminology such as disabled person, blind person, in short, terminology that does not harm the human dignity of the disabled person; or presenting stories to journalists that might be interesting to people with disabilities. A project like this doesn't end with the final products. It's really a project to transform paradigms,” he said.