The Brazilian press needs to do more to create diverse newsrooms. 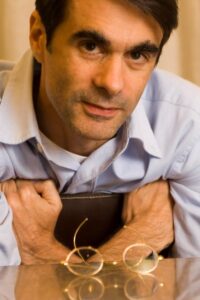 This was the message of João Moreira Salles, founder of the Rio de Janeiro-based magazine piauí, during a recent visit to the University of Texas at Austin.

Salles spoke to journalism students at the University about the principle challenges facing the Brazilian press today, chief among them a lack of diversity in terms of race, economics, gender, religion, geography and media ownership.

“You have to know that a good newsroom is a diverse newsroom. It follows that if you don’t have a diverse newsroom, there’s little chance you’ll end up with a good newsroom. A homogenous newsroom will be very narrow in its focus, in its interests and in its world perspectives, in the way it sees the world,” Salles explained later in an interview with the Knight Center. “It has to do with social justice, but it also has to do with reaching excellence in what you do. And without a diverse newsroom, you will never be excellent.”

Salles and a group of journalists created piauí more than 10 years ago out of a desire to see longform nonfiction on Brazilian newsstands.

“[Longform journalism] was my staple, I read it since I was really young but I couldn’t read it in Portuguese because no one was practicing nonfiction longform in Brazil. I decided to bring together a group of journalists, launch a magazine and see if there actually was a demand for the kind of pieces I would like to publish in Brazil,” Salles explained. “I wanted to read a magazine like piauí, I couldn’t find one like that at the newsstand. I was not alone in that. The group of journalists who helped me create piauí also felt that way. That’s the reason why we launched the magazine in 2006.”

Salles is an award-winning documentary filmmaker and heir of a banking family in Brazil. He had worked with journalists on previous documentary projects and was reading the New Yorker and the London Review of Books, but wasn’t finding that kind of material in Portuguese. He wanted longform stories written by journalists and backed by strong reporting and editing.

And, so piauí was born. Today, a team of about 20 works to produce the monthly magazine known for political profiles and in-depth features rather than breaking stories. They also feature literary works, poetry, fiction and comics. The illustrated cover, often a tongue-in-cheek commentary on recent political events, has become a way to illustrate the latest news. It’s also a big driver of newsstand sales.

Salles said the team is fairly diverse in terms of age and that the magazine itself consistently publishes pieces from young journalists and reporters. The permanent team includes reporters, editors, an art department, and a fact-checker. Salles points out that the latter position is disappearing from Brazilian newsrooms.

The name of piauí is itself a commentary on the lack of geographical diversity Salles points to as one of the problems of the Brazilian press. Piauí is a state in far northeastern Brazil, which is unknown to Brazilians who consume news largely focusing on Brazil’s three major cities: Brasilia, São Paulo and Rio de Janeiro.

Readers can buy the magazine at the far reaches of the country, though about 40 percent of readers are based in the city of São Paulo, Salles said. Another 40 percent from the São Paulo State and Rio de Janeiro, while the rest are scattered around Brazil. They calculate about 60,000 to 70,000 readers monthly.

In terms of concrete efforts to address issues of diversity, Salles acknowledged that piauí has work to do. 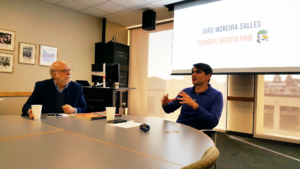 “We’ve done a lot of good work since the launching of the magazine, but this is not an area in which we have excelled. Our newsroom is fairly diverse as far as gender is concerned, but racially it is not diverse at all.”

“In Brazil, race is linked to socio-economic issues. So, we tend to have reporters, be they men and women, who come from the same kind of social background and therefore have a very homogenous perspective on the world and on Brazil itself,” he explained. “It is a problem. We’re not the only ones facing it, it affects all newsrooms in Brazil and I don’t see action or policies, effective policies, in place to change that. It’s something that we will need to tackle and I hope piauí becomes a leader in doing that.”

Despite changes to the education system, gaps in education quality often disenfranchise students entering university from the public-school system. These students can fall behind, not gaining the professional skills necessary to succeed in the newsroom. This may change if editors hire interns from diverse communities while at university and provide them with training in the newsroom with the objective of hiring them after four years of study.

This is something piauí could do, Salles said. From the beginning, the team was preoccupied with building the magazine and overlooked creating a more diverse newsroom.

“The magazine was created by people who were still very much drawn to paper, to the magazine as physical object,” Salles said. “This poses a challenge. In a digital world, it can become a flaw. We are trying to correct it.”

He said more emphasis will be placed on digital content without neglecting the physical magazine. To this point, the site has been somewhat of a mirror image of the print magazine, plus original content like the satirical and popular Piauí Herald and some opinion pieces.

But, the magazine has hired a team to write and produce content exclusively for the site.

Cover of the 138th edition of magazine piauí (Screenshot)

“This is the year in which piauí tries to have a greater presence on the web,” Salles said.

The new efforts include podcasting series on politics, women’s issues, work and sports; videos; and blogs.

The magazine will also focus on the upcoming October 2018 elections for president, congress, governors and legislative assemblies. Election coverage will be “central” to reporters’ work, according to Salles.

As Salles explained, Brazil is going through a “tumultuous period.” Former Brazilian president Dilma Rousseff was impeached and her predecessor Luiz Inácio Lula da Silva was convicted. The Lava Jato corruption probe “destroyed the political system” as “no political party has been spared from corruption,” as Salles explained. “The stage is set for someone who comes from outside the institutional political realm.”

“We will have to be extremely focused on the Brazilian election because nothing this year is as important. And it plays to our strength. That’s what we’re good at,” Salles said. “We have excellent political reporters, we’re very good with in-depth profiles of politicians, of lobbyists; we know how to report on the election machine, on how it works.”

Part of the online team’s work will be focusing on online operations of major candidates. Social media, including the use of bots, is now an inextricable part of political coverage around the world.

“This might be the first election in Brazil in which the internet is more important than network television,” Salles said.

The piauí team will use its rigorous reporting and editing tradition in the coming months to find out if Salles’ prediction is right.