The studies were conducted over the past four years and have looked at the owners of media outlets with the biggest audiences in each country in terms of radio, television, print and the internet.

"Transparency of media ownership is very important and allows us to broaden the public's and audiences’ knowledge, and allow for greater public debate," Emmanuel Colombié, RSF Director for Latin America, told the Knight Center. “We are trying to answer a series of basic questions: How can people critically read the media without knowing who provides it? How can journalists of the big outlets themselves work properly without knowing who is controlling the company they work for?” 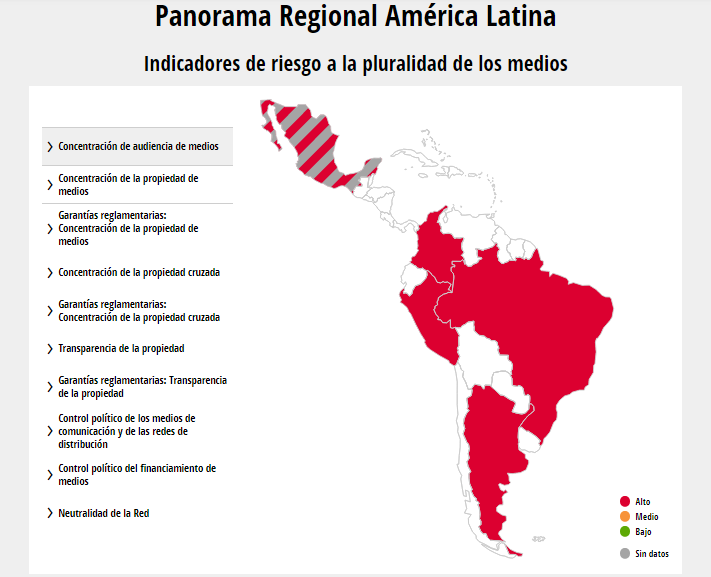 Map shows risk indicators to the plurality of media in Latin America. (Screenshot)

By highlighting media ownership, MOM also assesses the plurality of media in each country.

“Plurality is fundamental because it allows us to bring a diversity of opinion, and precisely in the process of opinion formation it is very important to have a number of different sources of information, different analyzes, for [the public] to forge their own opinion and participate in public debates. Transparency and plurality are fundamental, strong indicators of the level of democracy,” Colombié said.

The new site features a map that allows risk indicators to be compared to the plurality of media across the five countries. The risk of audience concentration by a few media groups, for example, is high in all of them.

“Latin America is definitely one of the areas of the world with the highest concentration of audiences, where we see that few families and few elites control the information,” Nube Alvarez, MOM project manager in Latin America, told the Knight Center.

The goal with the new site is to “reach, with the results of the MOM, those who can make a change to legislation to make media more plural,” Alvarez said. It’s also to reach out to people not familiar with the topic so that they can understand “who are the owners of the media and what do all the interests that they may have with businesses in other branches of industries or with politicians mean.”

Potential conflicts of interest due to the participation of media owners in various sectors of the economy, such as agribusiness, real estate and finance, for example, are a constant in the five Latin American countries analyzed by MOM.

“What we see in several cases is that industries are growing, owners are getting richer. We see in repeated countries that the owners of these conglomerates are considered among the richest people in the country and the world, as in the case of Mexico, with [Carlos] Slim [owner of the group América Móvil],” Alvarez said.

At the same time, journalists find themselves in increasingly precarious working conditions, she noted. That is also why media ownership information should be known not only to the public but to the journalists who work there, she argued.

The precariousness of the profession weakens journalists, who “cannot do a critical job when they know what their bosses' relationships with other industries are, and then they can push them from leaving the profession, even to falling into corruption cases,” she said. Similarly, if they are unaware of these relationships, they may end up doing journalism focused on the economic interests of the media owners, and "often they [the journalists] are not even aware of it."

“It is information that they should also know, who are the owners of the companies they work for, because how can they do a critical job [without knowing it]?” Alvarez asked.

The MOM has been produced in 21 countries around the world, always in partnership between RSF and local organizations focused on the right to communication.

Colombia was the first country in Latin America to be mapped in 2015 by the Colombian Federation of Journalists (Fecolper) and RSF. There, the study found that three media groups – Ardila Lülle Organization, Santo Domingo Group and Luis Carlos Sarmiento Angulo Organization – concentrate 55.5 percent of all content broadcast via radio, television, the Internet and print media. 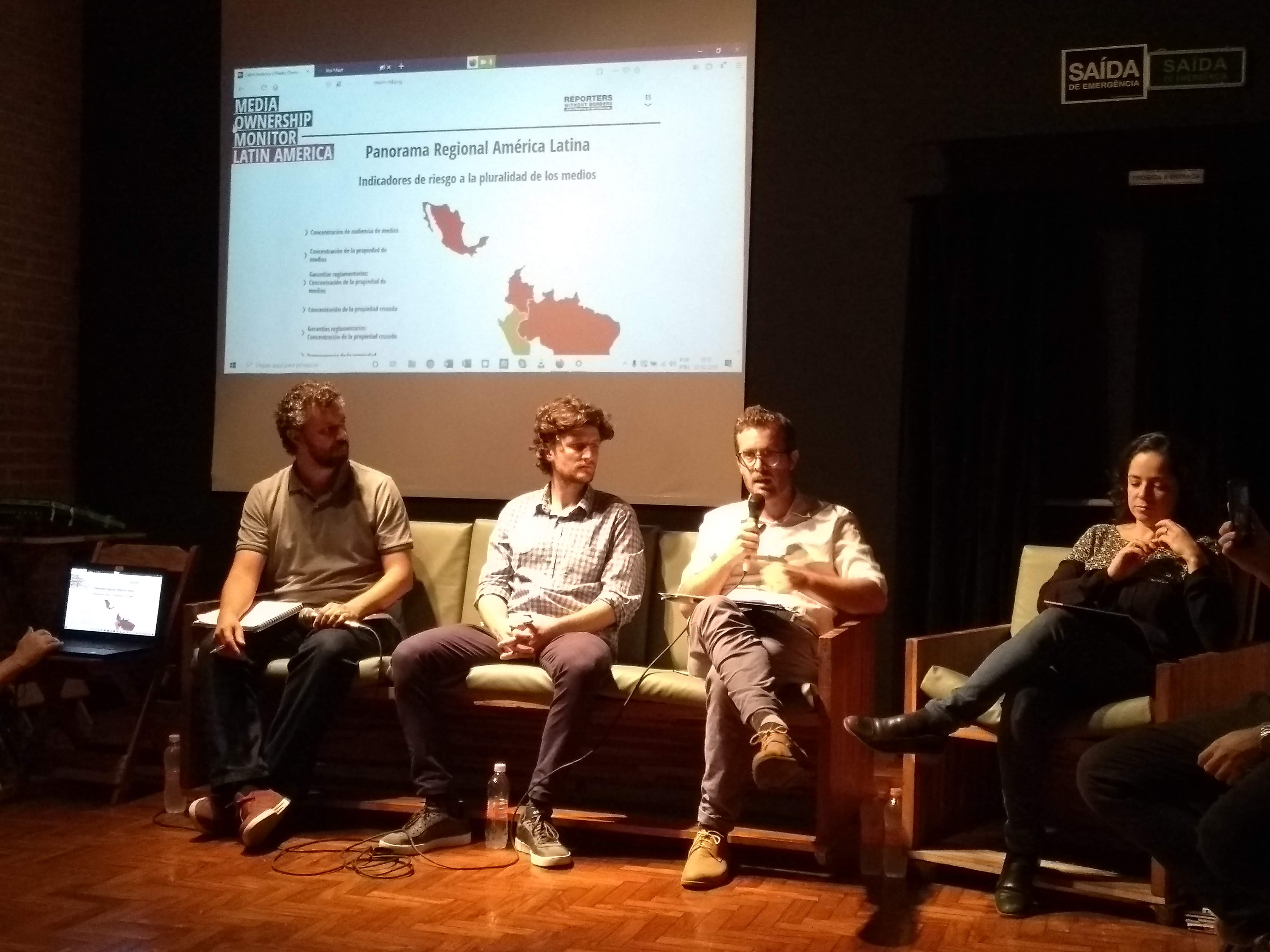 The following year, MOM was produced in Peru, with the site Ojo Público as a local partner. The study identified Grupo El Comercio's dominance in the country's media environment as owner of 16 of the 40 media analyzed by MOM, recipient of 70 percent of annual radio, TV and internet advertising, and holder of 80 percent of estimated circulation of print newspapers and 68 percent of the estimated audience of news portals in the country.

In Brazil, the MOM was created in 2017 in partnership with the collective Intervozes and analyzed the 50 outlets with biggest audience, which belong to 26 groups. The study identified the dominance of Grupo Globo, whose media have an audience greater than the sum of the audience of the four media groups that follow it in the ranking in the country. A particular feature of Brazil is the participation of religious leaders as owners of media – nine media, including TV channels, radio stations, print newspapers and online news portals, are owned by Christian leaders, both evangelical and Catholic.

Between 2017 and 2018, the MOM was produced in Mexico, in partnership with the National Center for Social Communication (Cencos). There, the study identified the proximity between media owners and politics: of the 42 media analyzed in the country, in 84 percent of cases their owners have family or business relationships with politicians. The MOM also highlighted the precarious situation of journalists and communicators in Mexico, one of the most lethal countries for these professionals in the world.

The most recent study was conducted in Argentina between 2018 and 2019, with the newspaper Tiempo Argentino as a local partner. The MOM reviewed the country's 52 principal media outlets, owned by 22 media groups. Grupo Clarín owns 12 of these media outlets and holds 25 percent of the Argentine audience, and controls, together with the La Nación group and the Argentine State, Papel Prensa, the only newsprint producer in the country.

"Media pluralism is a fundamental aspect of democratic societies and free, independent, diverse media can reflect divergent points of view, and allow criticism of those in power," Colombié said. “This concentration on the markets we observe in Latin America can pose risks to the diversity of ideas because it allows few actors to have a dominant influence on public opinion, and in addition create entry barriers for other actors and other perspectives.”

He also noted that one of the aspects common to the countries analyzed is the geographic concentration of the media outlets with the biggest audiences, generally in the capitals of the countries and, in the case of Brazil, in São Paulo and Rio de Janeiro. As well as the difficulty of gathering information about the owners of the media, because "most companies do not have an obligation to disclose their ownership structures," he explained. "This has to do with the legal frameworks of the five countries, which are not strong enough to compel these companies to disclose this information, which we consider to be in the public interest."

Another constant in the five countries is the small presence of women in leadership posts of media with the biggest audiences and as owners. In Argentina, among the 33 profiled owners, there is only one woman, Marcela Noble Herrera, who owns 24.85 percent of the shares of Grupo Clarín, according to the study. In Mexico, there is also a woman, Carmen Aristegui Flores, among the 26 owners of the media outlets with the largest audiences in the country. In Colombia, there are five women among the 21 profiled. In Peru, there are two women among the 13 owners profiled by MOM. In Brazil, of the 22 owners, only one woman is an individual, as part of the couple of evangelical bishops who own the Rede Gospel TV channel.

According to Colombié, with the launch of the regional website, the idea is to continue to make visible the results of these studies in each country, raising public debate and distributing recommendations to local public policy authorities to foster media plurality.

These recommendations were listed in a booklet distributed at the site's first launch event, held on Dec. 3 in Sao Paulo. These include the establishment of “regulations that prevent and dismantle monopolies and oligopolies” of communication; ensuring the existence of a public media that operates “independently and autonomously from the government”; the establishment of limits on the ownership of media “by political parties or individuals actively involved in politics,” including their families; and the adoption of “measures to protect the work of journalists and communicators,” including preventing and combating violence against these professionals.