In 2021, the Report for the World initiative, which supports independent media in recruiting journalists to cover under-reported topics in the press, debuted with partnerships with newsrooms in Brazil, Nigeria and India.

Its presence in Brazil, where it supported the hiring of two journalists for the data journalism site focused on socio-environmental issues InfoAmazonia and two more for the investigative journalism outlet Marco Zero, contributed significantly to the growth and impact of coverage of issues related to the climate crisis and the Amazon region.

The work of the "corps members" (as the journalists hired through the initiative are called in the program) during the first year of Report for the World in Brazil offered a very complete snapshot of what is happening in the country in terms of the environmental crisis, according to the organization. 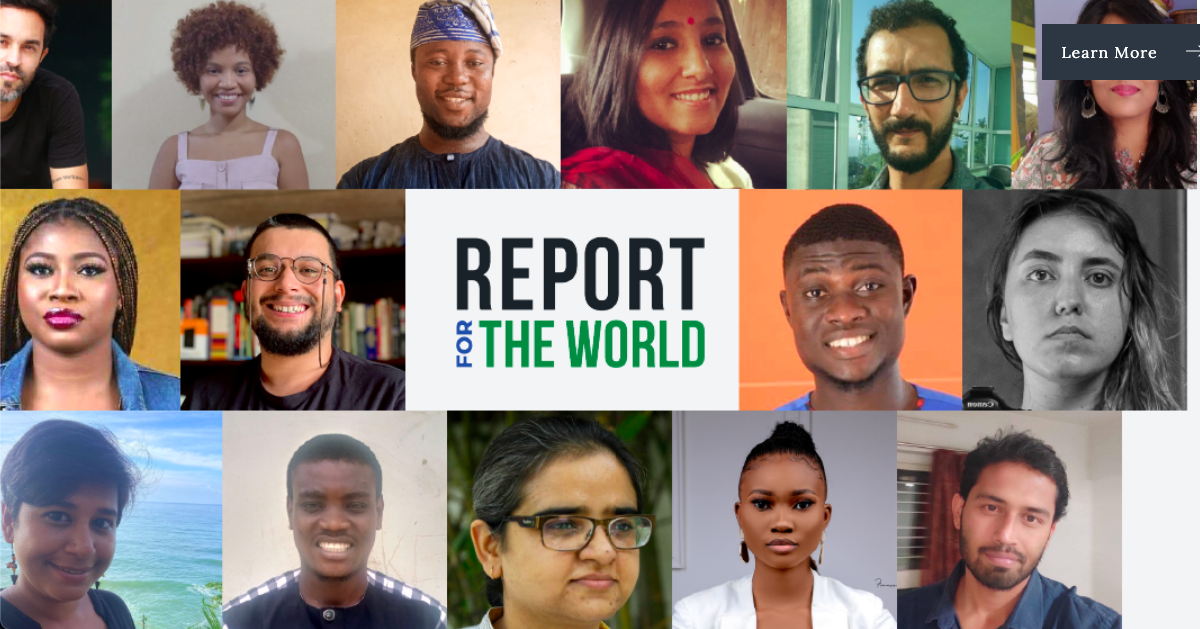 In its first year, Report for the World contributed to the recruitment of journalists in Brazil, Nigeria and India. (Photo: reportfortheworld.org)

“Given that Jair Bolsonaro and his government have opened up the Amazon to environmentally harmful, extractive industries, we need deeper reporting on such issues, which our corps members have been doing with tenacity and niche access,” Preethi Nallu, Global Director at Report for the World, told LatAm Journalism Review (LJR).

To further expand its coverage and impact on environmental issues, this year Report for the World created partnerships with two more independent news media in Brazil: Agência Mural de Jornalismo Das Periferias and ((o))eco. And one in Peru: Convoca. In addition, it renewed its partnerships with InfoAmazonia and Marco Zero to support the work of its corps members for another year.

This year, the initiative will also extend its presence in Latin America to support coverage of other relevant issues in the region, with partnerships with the Brazilian investigative journalism agency Agência Pública (for coverage of gender issues), the Mexican independent journalism organization Quinto Elemento Lab (corruption) and the Mexican digital native media Conexión Migrante (migration). In total, Report for the World will support the employment of at least 10 Latin American journalists in its 2022- 2023 period.

“This will give us a unique understanding of the impact of investing in journalists that consistently cover these critical issues over the course of three years,” Nallu said.

Report for the World is an initiative of the Boston-based nonprofit organization The GroundTruth Project, dedicated to rebuilding journalism from the ground up through initiatives that support new generations of journalists around the world.

Thanks to funding from the MacArthur Foundation, the Google News Initiative and Microsoft, Report for the World covers 50 percent of the corps members' salaries during their first two years of work, while the media partners that hire them cover the rest. During the third year, the initiative covers 33.3 percent of salaries.

The organization offers advice to partner newsrooms on strategies for raising funds to cover their share of corps members' salaries, with the idea that they will eventually become permanent members of their staff. In addition, the hired journalists receive training in various aspects of the profession.

“We support the corps members through technical trainings such as data visualization, expert advice on work related stress and trauma, and deeper reporting opportunities,” Nallu said.

The last four years have been far from easy for environmental journalism in Brazil. The denialist and anti-scientific discourse propagated by President Bolsonaro's administration, as well as his devastating environmental policies and the dramatic increase in deforestation and fires in the Amazon in recent years add to the growing insecurity suffered by journalists covering this region of the planet.

Just this year, the murder of British correspondent Dom Phillips and Brazilian activist Bruno Pereira brought international attention to the perilous situation in the Amazon. But they have not been the only ones. Homicides in the region where Phillips and Pereira were killed increased more than 500 percent in three years, according to data from the Amazonas state Public Security Secretariat.

A feature story by the journalist hired by InfoAmazonia as part of Report for the World had an impact on Brazilian Justice. (Photo: Screenshot of InfoAmazonia)

"We are exhausted from having to talk so much about misfortunes and changes that are going to harm the environmental pattern, and it's already been four years of that with this government," Marcio Isensee e Sá, content director of ((o))eco, told LJR. "It's not that there weren't problems before or that there won't be problems if we have a new government, but now it's very dangerous, much more dangerous. [...] Here they kill environmentalists, indigenous people and journalists who are doing their work in the Amazon, more than 50 per year. So, it is very crazy to think about this."

((o))eco, one of Report for the World's new partners for the coming year, is a Rio de Janeiro-based non-profit news outlet dedicated to covering issues related to nature conservation, biodiversity and environmental policy in Brazil.

With Report for the World's support, they plan to strengthen their coverage of biodiversity science and outreach. Due to the nature of these topics, the media company is looking for a journalist who can make field trips to accompany scientists and researchers to research areas. In addition, the media company expects that with this support it will also be able to extend its coverage to formats such as video and podcast.

"I think it is extremely important that we have more development of journalism around here, in this context - at least in Brazil - of many attacks on journalism. Having this support from these organizations is increasingly important," Isensee e Sá said. "Every time I see organizations like Report for the World doing projects and looking at Latin America, I think we are getting stronger and safer to do our work.”

The journalistic work of Brazil's first corps members has had a significant impact on the country's environmental agendas. For example, after the publication of the report "Mining company is accused of coercing Indigenous people to exploit potash in the Amazon," by the reporter hired by InfoAmazonia Fábio Bispo, the Brazilian justice system ordered a mining company to return land to the Indigenous people.

Likewise, the investigation "From mining to fish: how mercury contaminates the Munduruku Indigenous community," by corps member Julia Dolce, documented that there are dangerous levels of mercury contamination among the inhabitants of the municipality of Santarém.

“Report for the World allowed InfoAmazonia to have a permanent team constantly focused on socio-environmental issues and environmental policies, which led to more frequent publications, increasing our reach and our presence in the public debate on issues related to the Amazon,” said Juliana Mori, co-founder and director of this news outlet.

Marco Zero, on the other hand, has been able to expand its capacity to produce multimedia content and strengthen its coverage of environmental issues and Indigenous territories. For example, as a result of the program, corps members Giovanna Carneiro (reporter) and Arnaldo Sete (photographer) made a field trip to investigate the socio-environmental impact of wind farms in communities in northeastern Brazil.

“Oftentimes this funding is a lifeline for independent media to be able to continue certain thematic coverages,” Nallu said. “The fact that [corps members from Brazil] continue for a second year gives us the qualitative assessment in the sense that these stories are reaching diverse audiences. [...] Obviously newsrooms are seeing them as a worthy investment.”

For Report for the World, Brazil has been a success story in terms of building a strong and diverse first cohort of corps members. They have been able to provide a clear understanding of the climate crisis situation in that country.

The addition of Convoca as a media partner this year will expand coverage to the Amazon region of Peru. According to Nallu, the program plans to recruit newsrooms in the Amazon areas of Colombia, Bolivia, Ecuador and Venezuela in the future to deepen regional representation of the Amazon and take the initiative to a collaborative, cross-border level.

In addition, Report for the World will seek to connect corps members in Latin America with their colleagues in the other countries where the program operates (Nigeria, India, Zimbabwe, and Ukraine), so they can collaborate and share knowledge on environmental coverage.

“I would like to start by assessing the impact of large groups of journalists covering specific themes like climate change in different parts of the world, and to bring them together through our program,” Nallu said. “When we promote community-driven coverage of such global issues, we get more audience engagement and we strengthen civic participation." 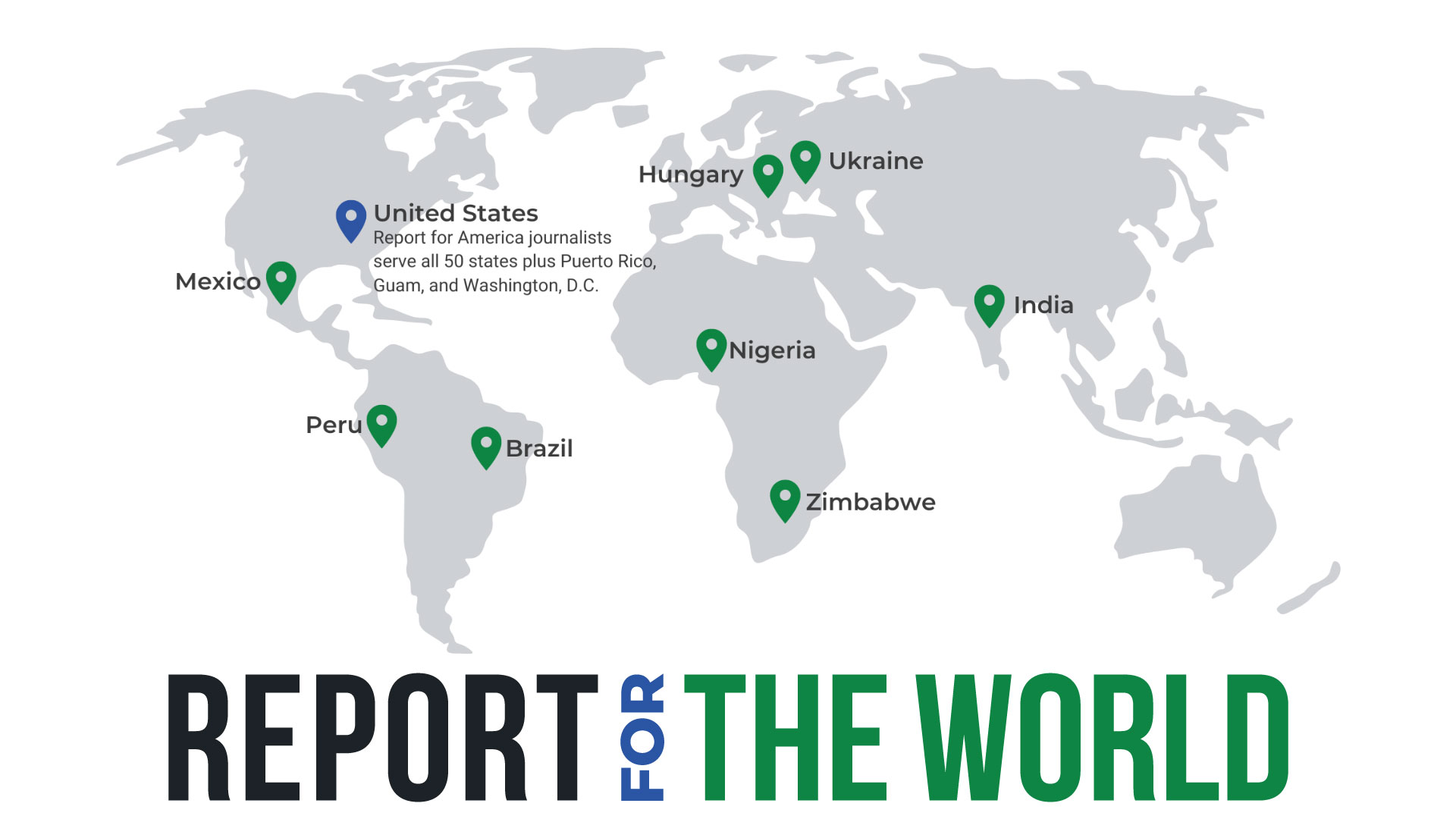 For the 2022-2023 period, the initiative will be extended to Mexico, Peru, Hungary, Zimbabwe and Ukraine. (Photo: reportfortheworld.org)

Given the insecurity experienced by the press in Mexico, it is important to develop a new generation of journalists who are prepared to face the risks involved in investigating such critical and relevant issues in that country as corruption and migration.

Such was the view of the directors of Report for the World when they took the initiative to Mexico this year. Quinto Elemento Lab and Conexión Migrante are the first media partners of the program in that country. They have already launched calls to find the first Mexican corps members.

“Mexico will be a strategic country for Report for the World. Firstly, because of its vibrant landscape for independent media and great examples of independent journalism. At the same time, it is the most dangerous country in the world for journalists,” Nallu said. “We hope to invest in more corps members, with ample security training and resources. Living in Mexico, I see the immense need for supporting investigative journalism here.”

The journalist hired by Conexión Migrante will cover migration issues from Tijuana, on the border with the United States, while the Quinto Elemento Lab journalist will conduct investigations from Mexico City related to corruption in the public and private sectors.

Quinto Elemento Lab, which has participated in cross-border collaborative investigations such as the Pandora Papers and the Lava Jato case, will seek to take this opportunity to consistently expand its editorial staff, which is currently made up of eight permanent members, to cover more investigative topics.

"We are looking for a reporter to help us cover political, social, human rights, corruption and abuse of power issues. We think these are the most crucial issues for current affairs in Mexico," Armando Talamantes, deputy director of the media outlet, told LJR.

Both Quinto Elemento Lab and Conexión Migrante rely heavily on funding through grants, donations and crowdfunding, so initiatives such as Report for the World will contribute significantly to their growth and consolidation.

“Most [independent media in Mexico] have not found business models to make them profitable, whether by subscription, donation, [or] advertising," Talamantes said. "We are all fighting these kinds of battles. So it's quite important and comforting for there to be organizations helping to hire journalists. That's essential, so we can have people in the field, on the street, where things are happening."