United not only by cultural and geographical similarities, but also by the type of problems that their countries face politically, economically and socially, seven journalistic organizations have formed the Voces del Sur alliance to systematize the monitoring freedom of expression in their countries. 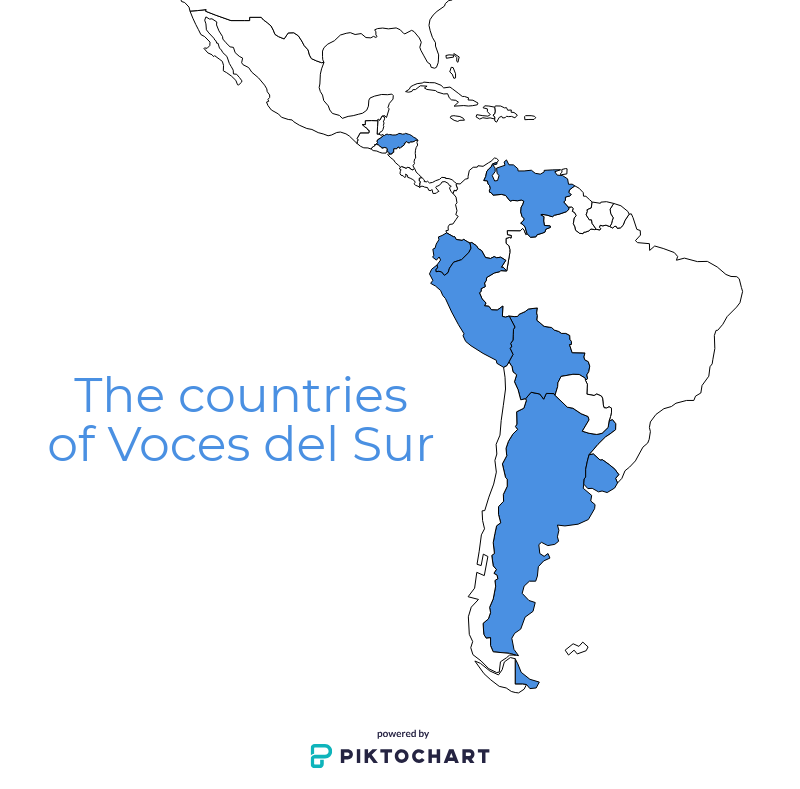 The organizations, which are also part of the chapter for Latin America and the Caribbean of freedom of expression organization IFEX, are Fundamedios (Ecuador), Center for Archives and Access to Public Information (CAinfo, of Uruguay), Forum of Argentine Journalism (Fopea), Press and Society Institute (IPYS, of Peru), IPYS Venezuela, Committee for Freedom of Expression (C-Libre, of Honduras) and National Press Association of Bolivia (ANP).

Peruvian journalist Adriana León, director of the information freedoms area of IPYS, told the Knight Center that the Voces del Sur project is the continuation of an initiative that began ten years ago with only three countries.

IPYS, together with ANP of Bolivia and Fundamedios of Ecuador, created the information freedoms group "El Gali,” to begin to standardize some criteria on the monitoring between their countries and to be able to make an analysis that went beyond quantitative measures.

"Two years ago the Pan American Development Foundation (PADF), a U.S. program for the development of democracy, approached us to reactivate this initiative. And we created this project called Voces del Sur. We made a document based on the standards set by both the Special Rapporteurship for Freedom of Expression of the IACHR and UNESCO," León said.

It is in this context that with a second contribution from the PADF, Voces del Sur has managed to add Uruguay, Argentina, Honduras and Venezuela.

Uruguayan journalist Fabián Werner of CAinfo specified to the Knight Center that the monitoring will be done based on 12 indicators. The most prominent are murder, abduction, forced disappearance, arbitrary detention, torture, judicial proceedings (civil and criminal) and abusive use of state power. They will also monitor countries in the group whose legal framework is contrary to international standards of freedom of expression, placing greater emphasis, due to their backgrounds, on Venezuela, Ecuador and Bolivia.

Other categories to monitor will be restrictions on the Internet, such as electronic blockades, threats, hacking, etc. Transversally there will be one more category with which all cases will be evaluated: gender.

"There is no public awareness of the importance concerning what the right to freedom of expression is. This is one of the conclusions we had (IPYS, ANP and Fundamedios). So, it was super important to do advocacy work from civil society," León said. She added that what they are looking for with this project is to start a debate about what is happening with media in these countries, to know why people are rejecting the press, why there is a social indifference for the right to freedom of expression, "which must be protected above all things."

The idea of the project is to support the monitoring systems of each of the seven organizations at the national level and also to activate a site with a regional web platform, which will be put online and administered by Fundamedios. This will gather all the alerts issued by those seven organizations in a single place, based on the list of indicators.

Werner also explained that the type of aggression that was suffered and whether the aggressors were state or non-state agents will be recorded. "We are especially interested in pointing that out because in many countries that we are going to monitor, the threats come mainly from agents of the State," he said.

Through the platform and the diffusion channels of each organization, the general public will be informed about the alerts. Based on all the information, the network will present a report in July of next year, before the high-level political forum on sustainable development that will be sponsored by the United Nations (UN).

"As the initiative (of the network) has to do directly with objective 16 (of sustainable development of the UN) and goal 10 specifically, which have to do with freedom of expression and access to public information, (... ) the idea is to present a report in that instance as a way to make a first great evaluation of the work that has started," Werner explained.

Based on the monitoring that these organizations have been doing individually for some years, they have been able to identify similar or common problems in the countries of the region. "These have to do with the difficulty of obtaining a quick response from the States in the investigation of crimes against journalists," Werner said.

The journalist pointed to Honduras and Venezuela as some more serious cases, for the recent murders of journalists and the constant hostile environment against the press, respectively. He also mentioned that while Uruguay is a country that is much less hostile to media, it also has problems related to freedom of expression.

León also said that the idea is to be able to cover more countries in the region in the project, but that will depend on the funds. "For example, what is a project concern? Central America, because it has different problems than those of South America. In South America the problem is more about governments that censor and are repressive through legislation; in the case of Central America, journalists are in brutal danger, because of the mafias, drug trafficking, etc.," she said.

For Werner, the common factor in most countries in the region is that states are not sensitive to the risks posed by threats against media and against journalists.