This is the second story in a series on covering protests in Latin America. Read the first and third here* 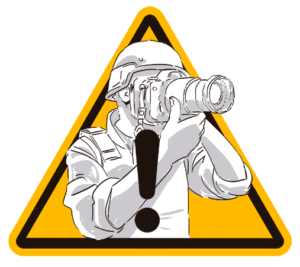 Covering street protests in Latin American cities has become a high-risk activity for journalists. With social and political tensions intensifying in the countries of the region and a growing anti-press rhetoric by political leaders, reporters covering demonstrations have become targets of radical protesters and of security forces.

“In most Latin American countries, attacks on journalists coincide with the emergence of populist movements, whether right or left. The police don't like journalists, whatever part of the political spectrum occupied by rulers anywhere in the world, but populists tend to despise the rule of law and this often increases impunity for attacks on reporters,” Marcelo Träsel, former president of the Brazilian Association of Investigative Journalism (Abraji) and professor at the Faculty of Library and Communication at the Federal University of Rio Grande do Sul, told LatAm Journalism Review (LJR).

LJR spoke with five journalists from the region who suffered some type of physical violence in their coverage of recent protests in Chile, Bolivia, Peru, Brazil, and Colombia. Their testimonies show the vulnerability of press professionals both from protesters of different political strata and also from security forces. 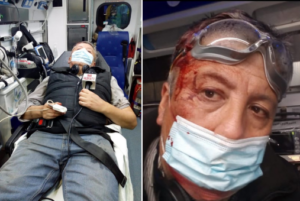 Blood flowed from the head of Chilean journalist Francisco Burgos, of Mas Valdivia TV, who had just been hit by several stones thrown by hooded protesters. Even injured, he started a live stream on Facebook, but quickly realized he couldn't continue the coverage.

It was the night of Oct. 18, 2021, and protests across the country marked the anniversary of the wave of social proteststhat had shaken Chile two years earlier. In Valdívia, 528 miles south of Santiago, the carabineros, who are part of the Armed Forces, had orders to unblock the bridge over the river that gives the city its name.

Burgos had taken some precautions in case the protest ended in violence. He wore protective goggles and gas masks as he anticipated that at some point the police would fire tear gas to disperse the protesters. After the stone was thrown, he was taken by ambulance to the hospital and got eight stitches in his head.

“I am very sorry that that night we lost our camera to record as a result of a projectile launched by an unknown subject. It was unusable. We are looking for support to get another camera to continue working,” Burgos told LJR.

‘It was going to be a peaceful march’ 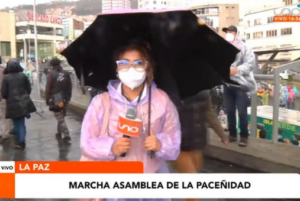 Ariana Antezana (Red Uno, Bolivia): Before the attack, the rain was the main concern. (Screenshot from broadcast of Red Uno)

Only the rain and cold worried Bolivian journalist Ariana Antezana, a reporter for channel Red Uno, when she learned that she would cover the Marcha de Paceñidad (March of Patience) in the streets of La Paz on Nov. 17, 2021. Her only protective measure was to wear a nylon poncho.

“In the Assembly of Paceñidad, we didn’t take specific security measures, because we thought it was going to be a peaceful march. It was what was being said, but this group went out precisely with the intention of attacking, even though the other [protesters] had detoured, to avoid meeting them," Antezana told LJR.

The march had been called by opponents of the federal government, led by the mayor of La Paz. However, government supporters also took to the streets and when the two groups met, there was a confrontation. Antezana rushed to record the conflict when protesters turned against her and other journalists who were covering it. They were attacked with shoving and sticks.

“We ran to show these aggressions that this group was carrying out and suddenly they come against us. First against me and against my cameraman. A person with sticks hits the camera. … And there I feel that they hit me on the back, they push me and throw me to the ground,” the reporter said. “All this happens and then we realize that indeed all this commotion was shouting at us, they approached us in a very violent way, saying 'prensa pitita,' 'sell out press,' 'coup press' and others. … I have a bump on my cheekbone, which is currently still green.”

The Antezana case was one of 39 attacks against journalists between January and November 2021, according to the National Press Association of Bolivia (ANP).

‘One is always with caution, with fear’ 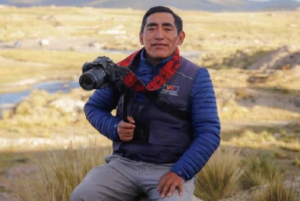 Vidal Merma (Chile): successive cases of violence have made him more cautious. (Courtesy)

In 20 years covering social conflicts in the department of Cusco, Peru, journalist and popular communicator Vidal Merma has accumulated important lessons when it comes to staying safe. The journalist works independently and collaborates with media outlets such as the magazine Pulso Regional, from Cusco, and the digital native outlet Ojo Público, among others.

“Over the years you learn to be able to take care of yourself, to prevent and also to have some safety equipment, such as a helmet, among others. … But I always try to be a little more cautious, to keep my distance so that I may not be hit by the bullets that are sometimes fired,” Merma told LJR. "I always try to have some allies who are next to me, close, or some far away trying to film the aggression that we suffered."

These measures have prevented him from being a victim of violence when covering demonstrations, but Merma said he has also been the target of detentions, intimidation, and attacks while covering protests. More recently, in the miners' strike in Espinar province on July 22, 2020, Merma was fired at by police while broadcasting live on Facebook. Fortunately, the fire did not reach him.

“One can no longer be close to these confrontations and conflicts, because there is the fear that at any moment somebody can stop us, somebody can shoot us too. So [my way of working] changes a lot. One is always with caution, with fear. That above everything,” Merma said.

LJR contacted Peru's national police, but received no response until this report was published. 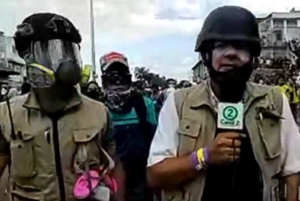 On July 20, 2021, Colombian journalist José Alberto Tejada began live coverage of yet another demonstration in the streets of Cali. Since April 28, the country's cities had been gripped by anti-government protests and the Inter-American Commission on Human Rights (IACHR) had already denounced excesses in the use of police force.

The Foundation for Press Freedom (FLIP, for its Spanish acronym) recorded 133 physical attacks on journalists in the first two months of the demonstrations.

“We have never documented an equal number of cases and especially the level of violence against the press," Jonathan Bock, executive director of FLIP, told LJR.

Tejada wears a bulletproof vest and a helmet. Beside him, always very close, appears a man dressed in a vest, helmet, goggles and gas mask. He seems attentive to what is going on around him and doesn't let go of the journalist, as seen in the live video broadcast.

“I do not want to elaborate on that. We simply have a citizen security scheme both at the building level, as well as at the level of our staff and at my level,” he told LJR.

The day's live broadcast shows other people trying to protect the journalist as the police force begins to advance and fire tear gas. There are 51 minutes of broadcast, in which Tejada and his colleague Jhonatan Buitrago – also with security equipment – report from the streets of Cali.

Tejada directs Canal 2 Cali, a community media outlet that was on the front line of covering popular demonstrations, always from the standpoint of the protesters. And that, according to him, made him a target of the security forces during the protests. The IACHR granted precautionary measures in his and Buitrago's favor.

LJR sought comment from the Colombian National Police, but received no response as of publication time.

When the police prevent something worse 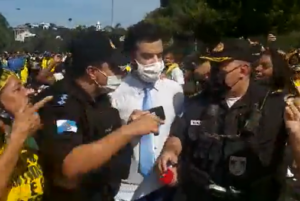 On May 23, 2021, the president of Brazil, Jair Bolsonaro, took a 37-mile motorcycle ride in Rio de Janeiro, where he was accompanied by thousands of supporters. CNN Brasil reporter Pedro Durán was assigned to cover it. At the end of the ride, he and other colleagues spotted the former Minister of Health, who had just become a target of the parliamentary inquiry commission investigating alleged government irregularities during the COVID-19 pandemic.

Afterward, journalists approached the former minister in search of a statement about the investigation, but he preferred not to speak. That's when Durán, the only and most easily identifiable TV reporter, began to be harassed with shouts of “CNN out” and “CNN junk.” Without reacting or interacting with the protesters, Durán immediately headed for the reporting van. On the way, he was pushed and punched in the back.

Two military police officers who were at the scene approached to protect the journalist while the attackers continued screaming and cursing. Durán got into the police car and was taken to a safe place. Everything was recorded.

“It's the first time this has happened [having police protection]. I've already witnessed the Military Police in Rio and São Paulo ignoring the attacks on the press,” Durán told LJR. "I think they did their job, which was to protect the people who were working, they were assigned to do it." 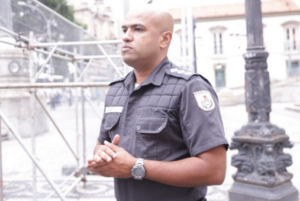 According to Lieutenant Colonel Ivan Blaz, social communication coordinator for the Military Police of Rio de Janeiro, the guidance to military police officers who work in the security scheme for political and social demonstrations is clear: protect journalists from possible acts of violence and guarantee press freedom.

“With the removal of the victim, we fulfill one of our greatest goals [safeguarding the victim]. … Having police officers there that are sensitive to this is already a great step forward,” Blaz told LJR. "If it hadn't been for the police escort, we're not sure what would have happened to him."

The images taken by the CNN cameraman and by the reporter himself were used to identify the aggressors – two of them were indicted in the Civil Police investigation and will respond to criminal proceedings in court.

Silvia Higuera and Teresa Mioli collaborated with this report.

*This story is part of a project on journalist safety in Latin America and the Caribbean. This LatAm Journalism Review project is funded by UNESCO's Global Media Defense Fund.