Occupying the same places as in 2020, Mexico and Brazil are the Latin American countries that are part of the Committee to Protect Journalists’ (CPJ) annual list of countries where crimes against journalists go unpunished.

According to the index, despite the fact that “key convictions” have been obtained in Mexico in the homicides of journalists Javier Valdez Cárdenas and Miroslava Breach Velducea in 2020 and 2021, “the media continue to be targeted at an alarming rate.” 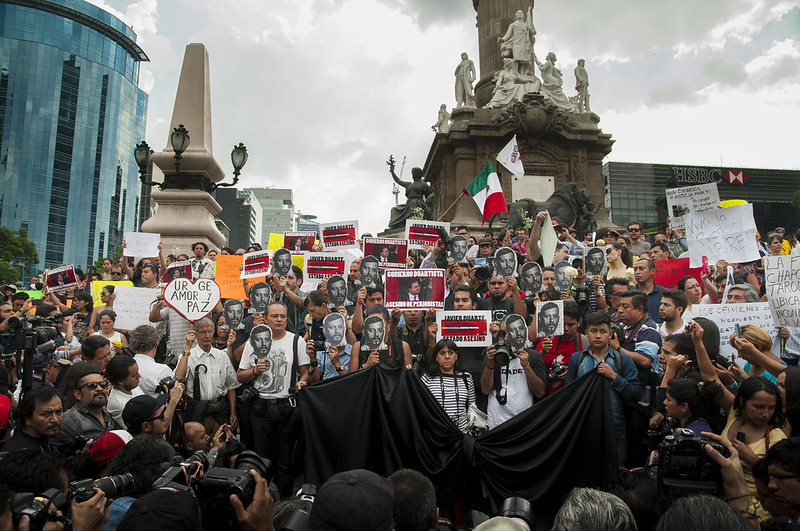 A march for journalist Rubén Espinosa who was killed in Mexico in 2015 (Eneas De Troya (CC BY 2.0))

Thus, for example, CPJ documented that as of Aug. 31 of this year at least three journalists have been murdered in Mexico with "absolute impunity." The murders recorded by CPJ are those of Gustavo Sánchez Cabrera, which occurred on June 17 in the town of Morro Mazatán in the state of Oaxaca; Ricardo Domínguez López, which took place on July 22 in the city of Guaymas in the state of Sonora; and Jacinto Romero Flores on Aug. 19 in Ixtaczoquitlán, Veracruz state.

For 2020, the organization registered four cases of murders in Mexico. According to CPJ, this number is second only to the cases of journalists killed in Afghanistan.

In the case of Brazil, the organization highlighted the murder of Evany José Metzker, whose beheaded body was found on May 18, 2015 on the outskirts of the town of Padre Paraíso in the state of Minas Gerais. His body was found with his hands tied, half naked and with signs of torture, and his head was found 100 meters from the rest of his body.

The journalist lived in another city and traveled there to do investigative work, as his wife told CPJ. According to local media, Metzker was investigating a child prostitution network and days before his murder he published an entry on his blog with an image in the style of the Wild West with the phrase "Welcome to Padre Paraíso" and "There are no rules or laws here.”

Brazil has not recorded murders of journalists in the last three years in which the crime can be confirmed as having occurred because of the professional’s journalistic work, according to CPJ.

Globally, 81 percent of the murders of journalists in the last 10 years remain in impunity, according to CPJ. According to the organization, of the 278 cases of homicides in the last decade committed in a nexus of corruption, organized crime, extremist groups and government retaliation, 226 have gone unpunished.

The top five countries in the index are Somalia, Syria, Iraq, South Sudan and Afghanistan.

CPJ's index calculates the number of unsolved journalist homicides as a percentage of the population of each country. For CPJ, cases are considered unsolved when the authorities have not obtained any convictions.