Between 2017 and 2018, Peruvian site Ojo Público published three investigative reports looking into the experiences of Peruvian girls and adolescents who were sexually exploited by traffickers. Now, those stories have been brought to the stage as the theater documentary ‘Delta.’

“The idea of taking journalistic content away from our usual audience is central for us, to reach precisely those types of audiences that do not necessarily read hard journalistic things, because they are in another environment,” Óscar Castilla, executive director of Ojo Público, said in an interview with the Knight Center.

According to Castilla, they coincided in their search to find other formats for their investigative work with playwright Antonio Venegas, who contacted the site in April of this year.

Venegas, director of 'Delta,' and his sister Norma Venegas, the actress who stars in the work, organized the data of Ojo Público’s journalistic works and other investigations on human trafficking and turned them into dramatic language to stage the play.

The staging of this work includes a large part of the material collected by Ojo Público’s journalists. It also includes investigations from other experts in the field, such as those lawyer Carmen Barrantes, who specializes in human trafficking, and the international organization Terre des Hommes, according to what Venegas told the Knight Center.

“For us it is more than a play: we have information, photographs, videos, data, dates, to see them on stage was like watching a documentary, a report but with dramatic language,” the director said.

Elizabeth Salazar, one of the main authors of the reports that inspired the play, told the Knight Center that at first she had some suspicions about whether this complex issue would be treated in the play with the necessary rigor. Salazar feared that the play could revictimize exploited minors and strengthen the misconceptions that society has about the problem.

However, the result seemed quite positive. “Here (in ‘Delta’) it was reported in a documented way, and this has been the important leap that the [journalistic] investigative report can have when being taken to the theater, without the need to go into sensationalism,” Salazar said.

The reports that inspired this entrance to the theater were “Sobrevivientes sin justicia” (Survivors without justice), "Mujeres trans: las víctimas invisibles de la trata” (Trans women: the invisible victims of trafficking) and "Los cuadernos de la esclavitud en Madre de Dios" (The notebooks of slavery in Madre de Dios). The latter was investigated by Salazar together with colleague Jonathan Castro.

The play takes place in 50 minutes, with a single actress on stage, who intersperses testimonial monologues of sexually exploited minors, with data and journalistic information that contextualize the vulnerability of their situation. The scenography and visual and auditory backdrop are based largely on the recordings and images documented by the Ojo Público journalists during their reporting. 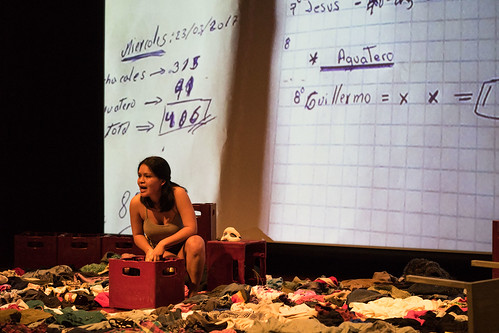 A photograph of a scene of ‘Delta’. (Courtesy)

For example, in a photograph of the scenes it’s possible to see the actress giving a testimony while sitting on boxes of beer bottles, surrounded by clothes spread on the floor. And against the backdrop, an image of a notebook from one of the bars where the minors are prostituted.

"The notes are quite cruel," Castilla said. The journalist said that one of the reports opens with the photo of the logbook of costs where it is noted how much the woman should earn for each beer she has with a client and for having some contact with them. “I think he (Venegas) knew how to take all that dense and hard part of the investigation [to the theater], even when it is such a complicated, cruel issue. He knew how to address it in the play,” the journalist said.

"The guiding thread of the story is the abuse of an underage human trafficking victim during the capture, during their transfer, during their detention and exploitation" by the traffickers, Salazar explained. She noted that the play also includes parts of the stories of these girls and adolescents when they are rescued from the brothels and report their situation to the police and then to a judge.

“I am glad that the report ‘Survivors without justice’ has been included in this play, which is precisely where the vulnerabilities in the judicial chain are exposed: what happens when they are rescued and the judicial process begins? They don't believe them, they ask for evidence of the crime and interrogate them two, three times. They make them go to court again and again and that makes them give up a complaint, and that is shown in the play,” Salazar said.

The situation is even worse for trans women. They also occupy a space in the play based on the report “Trans women: the invisible victims of trafficking.”

Most of these stories were documented journalistically in places adjacent to mining camps, where trafficking in underage women, from all parts of the country, is constant. In that sense, the play also owes its name to Delta 1, one of the illegal mining camps in Madre de Dios, a Department located in the southeastern Peruvian jungle where illegal mining is rampant.

The play premiered on Aug. 10 and has been shown in several cities in Peru, including Lima, Arequipa, Trujillo, Chimbote and Cusco. On Sept. 12 and 13 it will finish its tour in Madre de Dios.

For the author of the reports it is very important that this type of investigative journalism on social issues reaches another type of public and another type of possibility of reporting these events. “Sometimes so much is written [about] the problems of feminicide, of trafficking, of gender violence, that the public says 'well, it's one more statistic, it's one more case,’ or, in any case, 'this doesn't happen in my region, in my city, this is not going to happen to me.' To break this message of normalization about violence, it is good to reach these new spaces of communication. Hopefully this is replicated and replicated in a rigorous way,” she added.

“What the theater allows you is to be able to unite the investigation and the dramatic to reach the public in another way, from another side,” the director of the play said. “This project, what it allows is, in addition to [providing] all that [journalistic] information, to see at the same time the trip that these girls live from the emotional side, and you manage to connect from that side, too. Then, the impact may be greater or it may be in another way.”